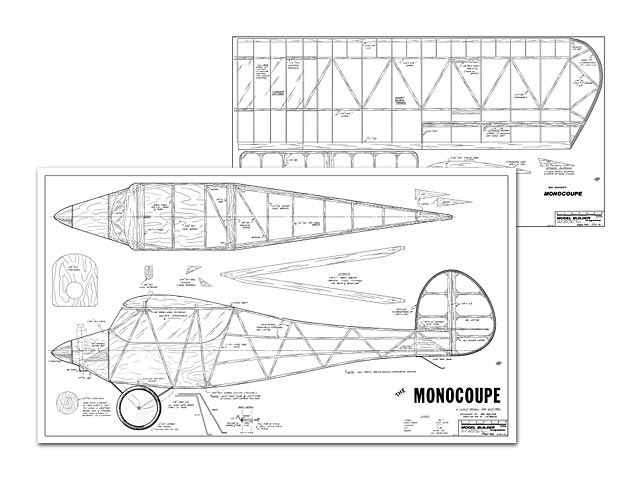 Mammoth Scalers need not be heavyweights. This one, even with heavier-than-gas electric power, weighs just a little over seven pounds. Be on the lookout for the original - it was stolen!

The Velie Monocoupe is a natural subject for a quarter - scale project. It is easy to build, it has interesting lines for a basic box structure. The Monocoupe is a fabric covered airplane, which means a light but strong structure, and has an exposed radial engine for good engine detail without too much work, thanks to Williams Bros. It met my personal transportation requirements by fitting into my Mercury Monarch and my wife's Mustang. The Monocoupe specs are: span 90 inches, length 56 inches, wing area 1300 sq in, and weight 7 lbs.

Naturally, for power, I chose the new Astro 25 mechanical speed reducer, which swings a big 18 x 10 scale prop. I had no worries about enough power, since these dimensions an weights were almost exactly the same as my Super Buccaneer Old-Timer, with which l won the electric event at the SAM Champs at Las Vegas in July, 1977. In fact, the Monocoupe turned out to be a little lighter, so I used a one amp battery pack to allow ten minutes of power. The wing loading came out at 11 ounces, so I bet the ship will thermal, but unfortunately I didn’t get the chance to try it. The plane was stolen the night before our Electric Champs, when some thieves broke into the station wagon carrying this and other planes to the meet.

The first flights were made with a 17 x 6 prop, which loaded the Astro 25 to only 10 amps, about 60% of available power. The climb was good and the plane was very stable and well damped in all axis, and responded immediately to the contro s. the Monocoupe's movements were slow and very majestic with the 17 x 6 prop, the speed seemed to be about 25 mph, much too slow for any aerobatic maneuvers. The next day, Larry lenno and Joe Zingali, the famous JZ team, supplied me with some of their new 18 x 10 props, and I headed for Mile Square to get some flight shots for Model Builder.

The Monocoupe flew as expected, very realistic, at about 40 mph, and smooth and positive. We wanted some low fly-by photos. My timid 10-foot high passes were not low enough, but after about ten circles of the field, I finally got down to about two feet. The Monocoupe is a high winger and can be turned with aileron-only, but a little rudder as well is needed to make a nice coordinated turn.

After the photo session, I returned to the shop to put the final finishing touches and trim on the ship for the Model Builder Electric Champs. Boy, was I going to show those guys! As I had five planes for the contest, and was CD aswell, it was impossible to take everything in one car. So the assistant CD, Keith Shaw, volunteered to take the Monocoupe in his station wagon. That night, some thieves smashed in the window to his wagon and made off with the Monocoupe and two other models, plus transmitters and field boxes. Luckily Keith had the trophies in the apartment, so the contest went on undisturbed. It was a beautiful California day, and the contest ran very well. I even got in some good flights with my backup ship, a Twin P-68. The next one will be even better.

CONSTRUCTION: The construction is quite straightforward, just like any other oldtimer R/C. The wing uses a two-spar, open frame construction, with working struts. Don't leave these out..." 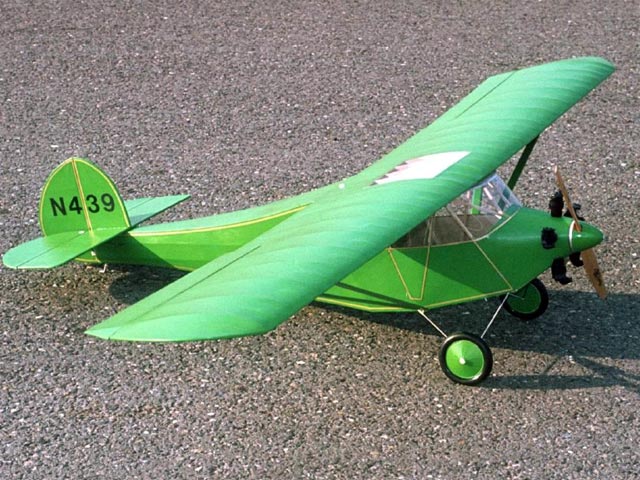