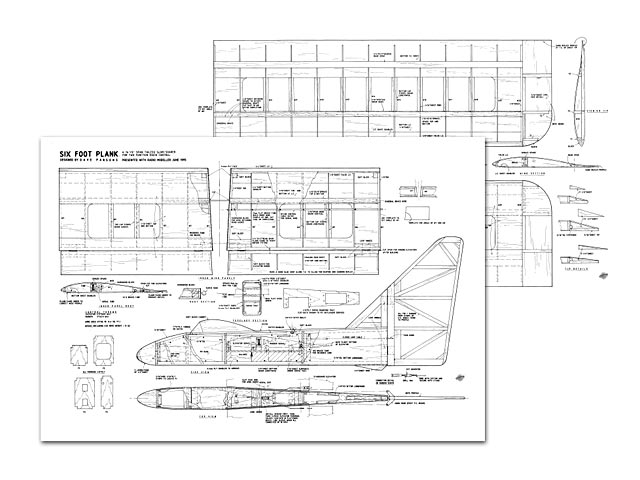 About two years ago I was going through some old Radio Modeller magazines and, in the issue for June '88 in the thermal section, I came across a three-view drawing of a plank type flying wing, 100 in thermal glider, designed by 'Powerful' John Goldsmith and called 'Stubby Tiger' (or 'Powerful's Plank'!). The virtues of this type of design were extolled in the accompanying article by George Stringwell. Thus enthused I drew up plans to the dimensions shown and built It using the CJ 3309 wing section and co-ordinates which accompanied the article.

I had a lot of fun flying this model and it is still in one piece. However, I had one problem - getting the blessed thing down! I do all my flying in the hills, where the powerful slope lift, especially if accompanied by strong thermals, soon had the 'plank' gaining height at an alarming rate' The CJ 3309 is a high lift section and has a narrow speed range and is more at home when thermalling from the flat. Any attempt to lose height by applying 'down' elevator trim simply increases the speed. the nose comes up - and even more height is gained. A large amount of down elevator merely converts the elevator control surface into a high lift flap, while the reflex trailing edge of the outer sections of the wing are still behaving as up elevator - and the result is even more height gained. Most embarrassing! However, all is not lost. Placing one's trust in the flat steel bar wing joiner and the spruce spars, a quick half loop into the inverted and an undignified drunken meandering soon produced the desired height loss.

Not so very long ago. Silent Flight magazine contained a pull-out of aerofoil sections accompanied by an article entitled 'Sections for Planks' where the writer mentioned the suitability of the CJ 3209 section for slope soaring. Armed with this information I decided to build a plank more suited for slope work using this section, based on the 'Stubby Tiger' design.

The wing span chosen makes most economical use of the standard 36 in length of spruce and balsa sheet. and, including the wing tips, comes out at about 76 in. The wing is in two halves and plugs into the fuselage using a 10mm flat steel bar joiner and a 10 swg piano-wire incidence wire. I can get my Plank into the back of my old Ford Capri car in one piece with the back seats down and the front passenger seat moved forwards a couple of inches - hooray!

The wingspan-to-cord ratio of the 'Stubby Tiger' is maintained but I used a bit of poetic licence in the design of the fuselage, and the addition of the bubble canopy - carved from solid balsa - adds a bit of 'jet appeal'.

Calculations indicated that the C of G should be at 25%, 2 inches back from the leading edge of the wing, carefully checked by balancing the model on a strip of 1/4 in square balsa placed cross-wise under the fuselage and on a flat surface. None of your 'two fingers under the wing on the main spar!' - not accurate enough for flying wings and deltas.

For the first flight an extra bit of lead was placed in the receiver bay - just for luck! A firm launch by my trusty assistant Trev and the model put its nose down heading straight towards the ferns. Full up trim and sustained back pressure on the elevator stick was required to maintain level flight. After a return to 'terra softa' in the ferns (landing) the extra bit of lead was removed. The second flight was an improvement but still 'nose heavy'. For the third flight a few turns of up were wound into the elevator linkage and Bingo! - success, hands off level flight. When flown in a light breeze and trimmed 'right back' the Plank took up the typical undulating flight of a slow flying tailless aircraft. However with an improvement in lift, a couple of clicks of down elevator trim resulted in a nice fast, flat glide angle with no porpoising at all. The choice of the CJ 3209 section for slope soaring has proved correct.

Aerobatics can only be described as 'different' or 'interesting', loops are a piece of cake and can be pulled very tight or can be converted into 'flip-flops' at the top of the climb, either flopping forwards or flipping backwards to complete the 'loops'. Rolls are achieved with plenty of speed and a large amount of rudder - what else - the rotation is fast for the first three quarters, then it hesitates and thinks to itself 'what am I doing here?' then condescends to complete the last quarter at a more leisurely pace!

Stall turns take some skill (luck) and if marked on a score from 0 - 10 can be either 0 or 10 - rarely anything in between. Inverted flight requires surprisingly little down elevator. The most difficult and rewarding manoeuvre is compulsory - the landing. Land directly into wind and plonk it onto the ground with a firm dab of down elevator. Any attempt to float it onto the ground too slowly usually results in PIO (Pilot Induced Oscillation) or over controlling producing ground loops, skids and flip-overs, the rudder and rudder linkage taking a hammering. I'm lucky in that the rotary output on my excellent Skyleader servos has very fine splines, allowing the output arm to jump the splines and rotate, thus absorbing excessive and potentially damaging shock loads..." 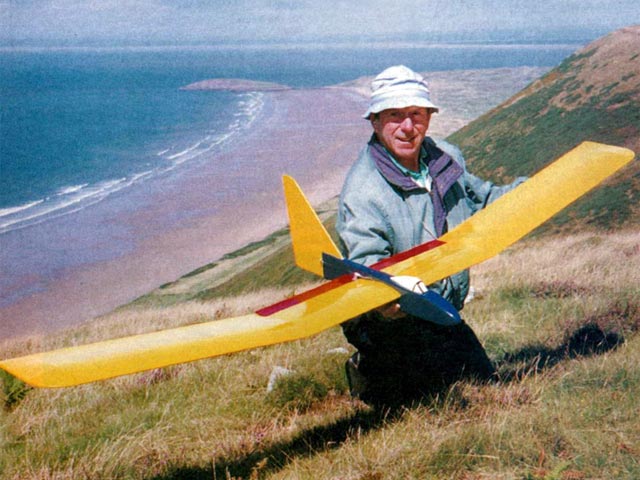