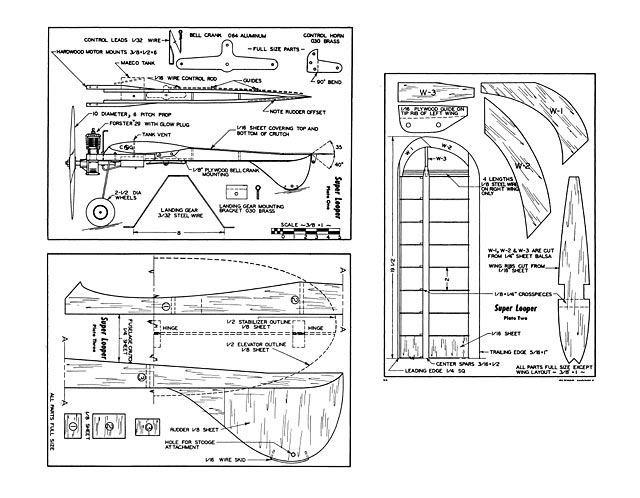 Quote: "Super Looper. A simple control-line stunt model trainer, for any maneuvre in the book.

The popularity of U-control stunt flying is on the upswing, and model builders have found it quite a relief from monotonous speed flying. To maneuver your model through spectacular aerobatics very nearly approaches the thrills of flying a real airplane. Though the maneuvers depend almost entirely on the skill of the pilot, they are not possible unless you have a correctly designed model, and for this 'reason we are presenting this simple-to-build stunt trainer which is capable of any maneuver in the book.

The Super Looper, powered by a Forster 29 with a glow plug, flew right off the drawing board. It was finished the night of December 13th and the very next day won the Class B stunt event at Bellingham, Washington. This win was due entirely to the smooth controllability of the model, as the author had practically no experience in stunt flying at that time. The model was so easy to fly that on the third flight vertical eights were done with ease. Since then, the model has proven to be one of the few stunt models capable of consecutive vertical eights.

The most important factor in a successful stunt design is a low power loading, which gives the model sufficient speed to maintain an even pull on the lines in all maneuvers. Also, a reserve of power is necessary when doing consecutive vertical eights. The glow plug makes this possible because the elimination of ignition units lightens the weight considerably. Our model weighs only 18 ounces, and you can imagine how a .299 engine will haul that around. There is always a reserve of power for any emergency.

Another important point in this model is its ability to perform tight maneuvers without stalling out. This is accomplished by using a low wing loading and a 15% Davis airfoil which resists stalling. The short tail moment arm works hand in hand with this tight turning radius because it is less affected by the circular flow. Circular flow is the difference in the relative airflow on the wing and tail when the model is turning, as explained by Frank Zaic in connection with the spiraling of free flight models. The same ideas apply to U-control.

The placement of the Super Looper's rudder below the stabilizer deserves some explanation. This was done because a low fin tends to counteract torque and make the model go straight, an important point in case the lines ever go slack. The rudder also saves some extra work by acting as a tail skid and a fastening point for a stooge.

Since the rudder is not very effective at low speeds, 1-3/4 ounces of weight should be added to the outboard tip to insure that the model will always tend to fly away from the center of the circle, This characteristic has saved our model several times when the engine quit while the model was performing an overhead maneuver. Without the weight it most certainly would have peeled off inward instead of outward.

Construction of the model stresses simplicity, which makes it an excellent stunt trainer. Until you perfect your flying technique, there is no sense in building tapered wings and sleek fuselages. In stunt flying it is only normal to misjudge occasionally - which is all the more reason for building constant chord wings and crutch fuselages.

The plans show all parts full size except the wing, which may be easily scaled up. Merely draw a line for the leading and trailing edge and perpendicular lines for the ribs. Pin one of the center spars to the plan and cement the ribs to it. Then cement the other spar in the slots along the top.

Add the leading and trailing edges immediately so that any warp in the wing may be corrected before the cement dries. Trace the tip outlines from the plans, and cement them in place. The final touch to make a durable wing is to cement the cross pieces to the ribs and center spars, preventing them from splitting easily in a crackup. Strengthen all joints by filleting with cement. When dry, sand entire wing. The fuselage is a simple crutch construction. Cut out the motor mounts and drill holes for the mounting bolts. Then cement the hardwood motor mounts to the 1/4 in fuselage sides. Finish assembly by bolting the pieces to the motor and bending the two ends together. Cement cross pieces and plywood bell crank mounting in place. Center section of wing and top and bottom of crutch are covered with 1/16 sheet. The fuselage also should be covered with silk-span, for additional strength.

A good part of the success of a stunt model lies in the location of the tank. The center of volume of the tank should be in line with a line passing down the center of the intake tube for rear rotor motors, or on a level with the needle valve for front rotor motors. In order to do this a cutout must be made in the motor mount on one side. Wrap the motor mount with thread at this point to prevent it from splitting. One vent for the tank is extended through the wing. If the tank is not mounted correctly, you will notice that the motor will either richen or lean out when inverted. If this happens, the tank will have to be raised if the motor richens, lowered if it leans out too much..." 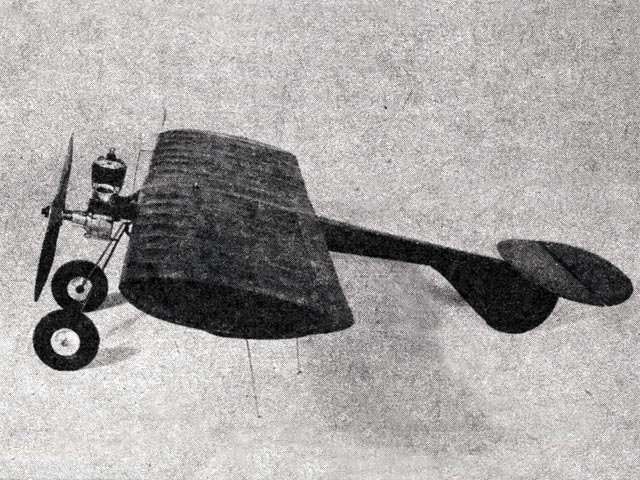