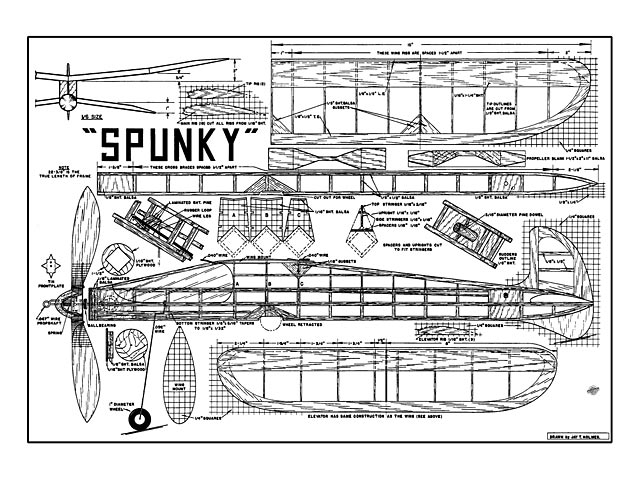 Quote: "HERE’S that new postwar job that you’ve been waiting for! Spunky is a compact, super-streamlined ship with plenty of the stuff needed to get those first places. Proof of this is in the fact that of three ships built not one has stayed with the owner for more than nine flights.

But enough of talk. Just feast your peepers on those curves and brother - she sells herself!

As good a place as any to start is inscaling up the plans. A piece of brown wrapping paper will suffice for the drawings. This type takes pencil lines easily and erases neatly.

FUSELAGE: Dig out four strips of hard 1/8 sq balsa for the longerons. Maintain balsa of equal strength to keep the fuselage from warping out of line. Layout the two sides, building one over the other to assure perfect alignment; then trim the rear to fit and glue the sides together there. Insert crossbraces starting from the rear of the fuselage and working forward. After all crossbraces are in place, plank in the indicated positions with their respective materials. Place the sub-rudder, formers, wing mount and the nosepiece in their correct positions, then attach the stringers.

The nosepiece is assembled by laminating two pieces of 1/8 hard sheet balsa and attaching the plywood to one side. After drying, cut out the center portion as illustrated. Be sure to save this portion because by reversing it, it may be used as the nose plug. Now assemble the retractable landing gear. Make sure the rubberband which pulls up the gear does not create too much tension so as to cause the gear to fold prematurely on ROG flights. Lubricate the rubberband to keep it operating smoothly against the metal surfaces.

WING ASSEMBLY: Cut out all parts used in assembling the wing. The ribs are of 1/16 hard sheet balsa, while the tip outlines are of medium 1/8 balsa sheet. Build 1/2 of the wing over the plan by first assembling the outline, then inserting the ribs. When thoroughly dry, remove it from the plan and build the other half directly on the underside to assure symmetry; then put in the proper amount of dihedral at the positions designated. Following this, insert the gussets which are made of 1/32 sheet balsa. Next, plank the leading edge with 1/32 medium hard sheet balsa of the straightgrained variety. Be sure to get plenty of glue around the dihedral joints to insure strength at these vulnerable positions, as a precaution against the abuse and mishandling that all models seem to go through at one time or another. Place the two 3/32 sheet balsa centersection panels in their respective positions to provide a surface for the wing to rest against.

This type of wing construction embodies great strength as well as lightness and aerodynamic efficiency.

EMPENNAGE ASSEMBLY: Construct the stabilizer in a manner similar to the wing, except in respect to inserting a reverse dihedral of the indicated degree. The rudder is constructed in the usual manner by building the outline and then inserting the crossbraces. Cut the trim tab away from the rest of the rudder and insert the soft wire hinges to provide a turn adjustment for the model.

PROPELLER ASSEMBLY: Select a medium soft, straight-grained, balsa block of the proper dimensions and carve a right-hand propeller. The blades should be symmetrical in form and have an undercamber of 3/16 with a thickness of about 1/8 in. Assemble the hinge, as illustrated, along with the rest of the folding equipment The type of stop assembly used is definitely an answer to the bulky, repulsive affair seen on many models today.

From a soft balsa block, 1-1/2 in cube in size, carve a spinner. Splitting it across the center, carve out the inside so as to provide a free operating space for the stop. Then glue it to the rest of the propeller assembly. Sand the propeller until thoroughly smooth and then cover the blades with tissue. Apply three coats of red dope and two coats of clear lacquer over this, sanding between each coat to get that glasslike finish. Remember, a plane's thrust is proportional to the efficiency of its propeller, so act accordingly.

COVERING: Before covering the ship, sand all the parts thoroughly. Notch the fuselage formers to prevent their sticking to the covering and producing a bumpy surface between the stringers. A smoother covering is also obtained if the builder will install the celluloid windshield before papering. Little need be said of the covering procedure as it has been gone over time and time again. The original was covered with red AA tissue. Dope the ship with three coats clear dope, sanding lightly between each coat. Use well worn sandpaper for this operation so as not to puncture or tear the covering.

ASSEMBLY: Glue the stabilizer and rudder into their respective positions as illustrated in the plans. Spunky is powered by a 12 strand motor of 1/4 in flat brown rubber, 23 inches in length.

FLYING: On some calm day, presuming you have a well lubricated motor and a warp-free ship, take her out for her maiden voyage. Since no two ships perform identically, exercise great care in its first flights. The original had 1/16 downthrust and the same amount of right rudder. Spunky has a fast steep climb in large right circles, and a slow shallow glide in tight right circles." 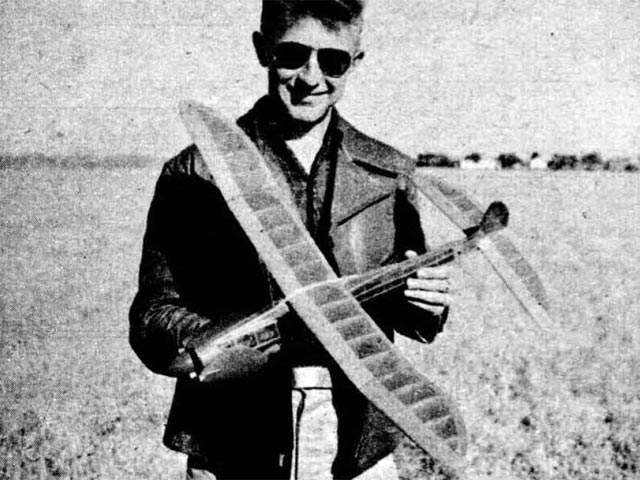