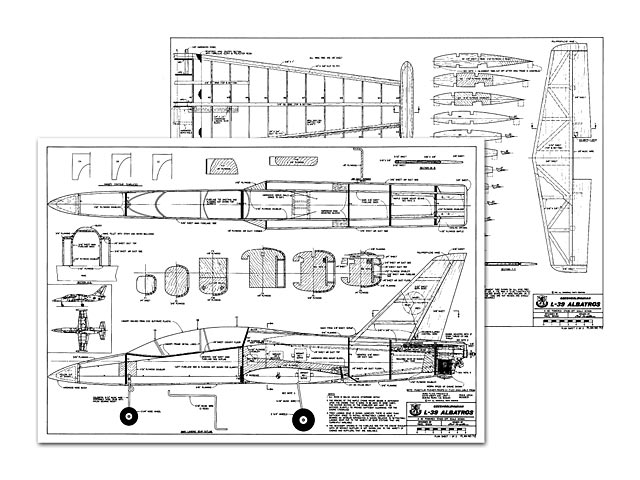 Quote: "A Stand-Off Scale model of a two-seat, single engine, low wing jet of all metal construction with three-wheel retractable gear. The model is designed for .60 or larger engines, four to five channel radio, with optional retracts.

It is my opinion, that all R/C modelers fall into one of two main categories. The first (and largest) group being those of us who prefer to build kits of established and proven designs or the almost-ready-to fly (ARF's) type of R/C aircraft. The second group is comprised of those modelers who are continually searching for something that is unique or different from the established designs. if it were not for this type of modeler, we would all be flyiing the same few designs. There would be, in all probability, no ducted fan models, canards, deltas, pushers, etc.

Admittedly, many models that are new or 'different' do not always measure up to the designer's expectations. For every new successful design, there are many that turn out to be failures.

Herein lies the key to the intense satisfaction that can be realized by the building of a model that is different from the norm, and one which also flies well. While l build the established pattern designs for use in contests, my primary interest is in modelling new or different types of aircraft. The anticipation during the building phase, as to whether your new creation will fly as well as planned, is exceeded only by the satisfaction and pride one feels when the flight characteristics prove to be outstanding. I know of no greater thrill in modeling.

The L-39 Albatros is not really an unusual design except for the fact that it is powered by a pusher engine. I have always wanted to build a model of a jet and not spoil its sleek looks by conventionally mounting the engine in the nose. I selected the L-39 after seeing it perform low level aerobatics at an air show. lt was my belief that the L-39 would be an ideal model for use in R-/C model flight demonstrations and intermission shows at contests.

(1) Keep the model as close to scale as possible.
(2) Use a .60, or larger, size engine.
(3) Strive for good flight characteristics and aerobatic capability.
(4) Keep construction methods simple.

My FAI pattem ship building experience was put to good use. The wing and stabilizer/elevator were enlarged slightly to compensatefor an anticipated weight of about 8 pounds. Larger ailerons were also employed for better roll capability.

If you are interested in a Stand-Off Scale jet model that is different and guaranteed to attract high interest from your fellow modelers and spectators alike, the L-39 Albatros is recommended for your building and flying pleasure.

CONSTRUCTION: Wing: Cut all the wing and aileron ribs out of 1/8 sheet. (lf a wing jig is to be used, the alignment tabs may be eliminated. This construction sequence will, however; be directed to those who are building the wing on a flat surface.) Cut out all the plywood reinforcing plates and ribs. As the wing has no dihedral. it can be built as a single unit by splicing the wing panel plan sheets together at the wing root centerline.

The alignment tabs will produce the proper wing taper. Glue the plywood full W1 rib and partial W2 and W3 reinforcing ribs to the respective balsa wing ribs. Pin each wing rib in place over the plan with the 3/8 square wing spars in place along with the hardwood landing gear blocks; if fixed landing gear is to be installed. Glue this assembly together, making sure that all the ribs and spars are properly aligned. Pin and glue the 1/4 x 3/4 inner leading edge piece in place, after it has been trimmed to fit. Pin and glue the 1/4 x 3/4 aileron opening piece in place after it, also, has been trimmed to fit properly. Glue the center section plywood reinforcing plates (WH1. WH2 and WH3) in place. Install the two 3/8 hardwood dowel wing hold-downs and glue in place. Glue the hardwood senro rails in place, spaced to accept your brand of servo.

The 1/8 music wire aileron torque rod, with tubing bearings, are now installed by notching ribs W1, W2, W3 and W4. The top 1/8 sheeting is now installed. When dry, remove the wing assembly and trim the alignment tabs from all of the wing ribs.

The ailerons are constructed directly over the plan by pinning the aileron ribs in place and gluing the 1/8 sheet front piece to the ribs. Glue the 1/8 sheet aileron top sheeting in place. When dry, remove the ailerons from the plan sheet and install the aileron torque rod blocks and 1/8 bottom sheeting. The wing bolt stiffener blocks are now glued in place and the 1/8 bottom sheeting is added. Glue the 3/8 x 1 in leading edge to the wing.

The ailerons can now be fitted and installed into the wing. (If the wing is to be covered with silkspan,fiberglass cloth, or heat shrinkable film type covering, it is easier to cover the ailerons and wing separately..." 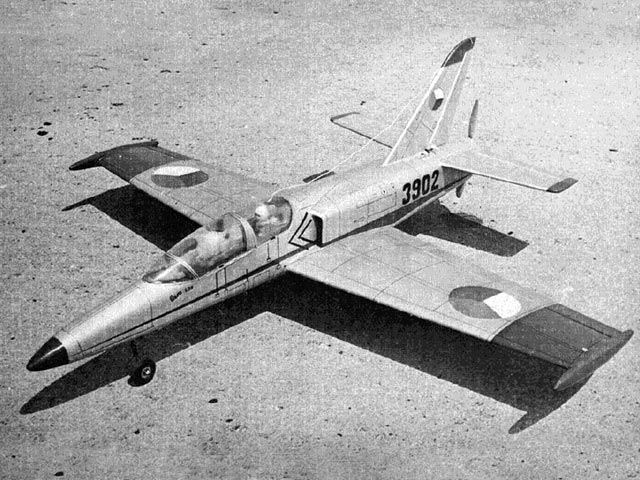 There seems to exist a more recent, more scale like version of this plan with round air intakes instead of the "boxy" ones of this early version.
Thomas - 09/09/2021
Add a comment