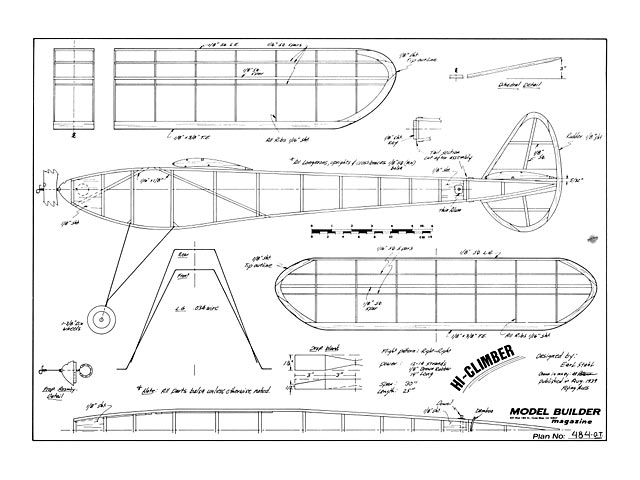 Earl Stahl is best remembered by OT modelers as the designer of a great series of rubber powered scale models that appeared in the magazines (mostly Model Airplane News) during the last few years before the US entered World War II. The Rearwin Speedster (oz3845) and Fairchild 24 (oz3322) were the most popular, and even today are almost sure to show up at any contest offering a rubber event.

However (without digging into the old model mag flies to verify it), I believe the Hi-Climber, and its low-wing counterpart, the Hurricane (oz12066) were published in Flying Aces magazine before the scale jobs appeared. Anyway, the Hi-Climber (oz2706) appeared in the August 1939 issue of FA, and the Hurricane in the July 1949 issue.

As the plans indicate, this 30-inch span model is quite basic, and easy to build. We'd only suggest two modifications: build the fuselage in one piece and rig a simple DT for the stab. We're not sure how the OT rules apply, but Earl does suggest in the article that a one-bladed prop could be used.

The balance point is not specified on the plans, but Earl suggests that the wing be slid back and forth for glide adjust-ment. He also suggests 12 to 14 strands of rubber (shouldn't need that much of the modern stuff) and right turn under power and in the glide.

In typical Flying Aces lingo, the sub-heading says: Yessir, she's a push-over to build and a humdinger for turning in long endurance flights. So don't lose any time in constructing YOUR copy of this thermal-loving balsa-baby! Well, Twenty-three skidoo to you too!" 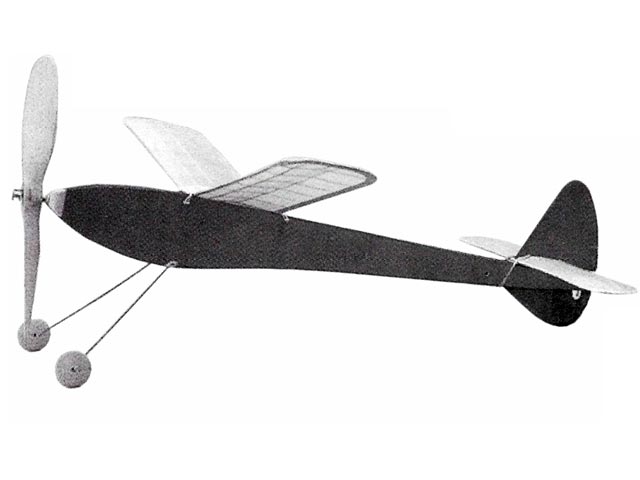