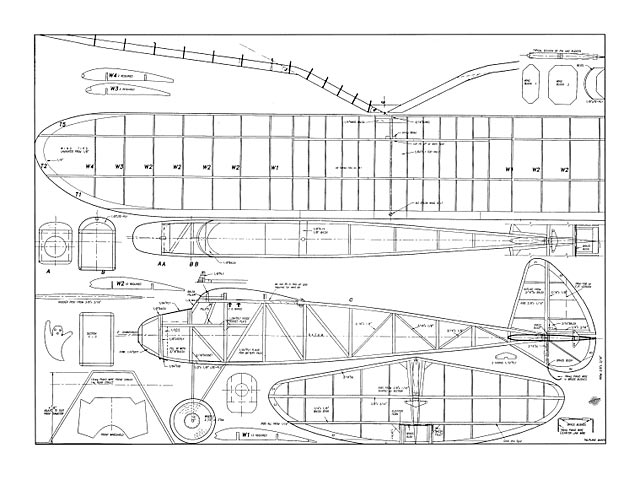 The Electric Spook design also appeared in RCM see Spook 48 (oz7808). This here is the plan as it appeared in Slient Flight, 2000.

This here is essentially the same plan - and also the same article with only some minor changes in wording - but this plan scan here is much clearer and easier to read. Still low res.

Quote: "Back in April 1989, RCM&E featured the plan of my 96 in span glow powered version of the 1940's Spook. Since then many Spooks have been built, and I have had many letters and pictures from happy owners from all the world. My own Spook has had over 1,000 flights, is still undamaged and in good flying condition. As I got older I became interested in electric powered models - I found it was easier to go to the flying field with a charged model, transmitter, charger, and a few tools and be able to fly. No heavy toolbox, fuel container, pump, starting batteries, cleaning materials etc, are required. Also there were no fuel stains in my car or on my clothes after a day's flying.

There is much interest now in small lightweight electric powered models and I felt that the Spook would be an ideal model to build.

The original Spook (oz53) was 48 in span, designed in 1940 by Barney Snyder and John Muir, was a free-flight model, and with its beautiful gull wing and large stabilizer was an extremely stable flier - a combination which makes it eminently suitable for electric power.

Motor: I used a Master Airscrew 3.51 geared electirc motor for power and 7 cells (see battery box details), giving approximately a 12 to 15 oz/sq ft wing loading, depending on the size of the battery pack..." 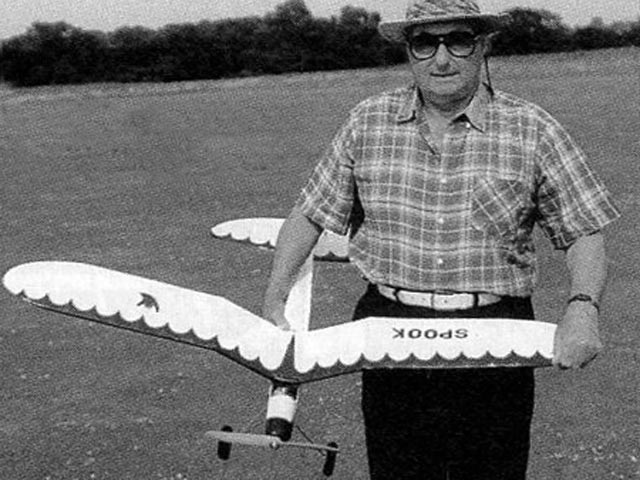