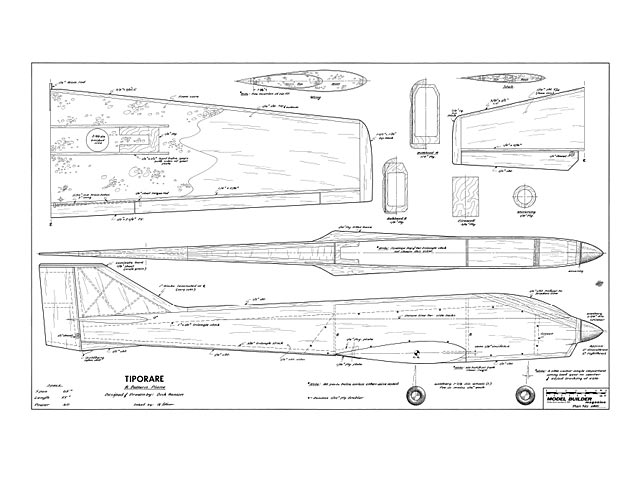 Note this here is the Tiporare design at it appeared in MB, Feb 1980. The Tiporare was also later kitted by Dick Hanson and by Great Planes.

Quote: "Tiporare, by Dick Hanson. Currently the hottest pattern ship, the 'Tipo' is being flown by many of the top competition fliers, including National champ and FAI Team member, Dave Brown. Build one - it's the best.

Just exactly what is a Tiporare? If you are an active pattern flier you probably already know the answer: it's a Curare (oz5527) with a nose job, silicone shots and a fanny tuck.

We watched the championships at Ohio a few years ago and were particularly impressed with Hanno Prettner's plane, as well as his flying. Dave Brown was also impressed with what he saw and it wasn't long before little stacks of balsa and styrofoam were shuttling between his home and mine. When finished, I had a reasonably close example of a Curare.

We have built many pattern planes in the last five or six years, perhaps 150 or more. Big ones, little ones, bipes, .40 size, built-up wings, foam wings, etc., etc. But we really haven't come up with a bird that was as easy to fly correctly as the Curare.

Several more were built with various changes to see what would happen. Among these changes were side mounted engines with tuned pipes, decreased stab angle (cathedral), long ailerons, altered engine thrust lines, CG shifts, coupled flaps (Dave Brown and Tony Frackowiak both liked the coupled flaps, and I admit that the corners on the square eights were very crisp on Tony's plane when I flew it), landing gear relocation, thicker stab, and an old trick to artifically increase effective lateral area, a tuck down each side of the fuselage.

The plane as we show it here is our favorite arrangement of this design and is very easy to set up for Novice or Masters class flying, using any solid running side exhaust engine with a pipe. We feel you do not need or want the Tipo to fly at very high speeds. We have seen numerous pattern contests where good fliers have lost points simply because their planes flew so fast that the ballistic shot rolls and oversized loops and eights failed to impress the judges who were there to judge precision flying, not a one-man pylon race!

We have a few suggestions which should help you get the best results flying the Tiporare:

1) Select the lightest possible wood for all sheeting, leading and trailing edges, rudder and elevators, and fuse-lage blocks. Use medium wood on fuselage sides and use firm wood on the ailerons.
2) Avoid engines with high vibration levels. They will ruin your servos, among other things, and make it difficult to keep the plane in accurate trim.
3) Select a propeller which will give maximum vertical performance, not maximum speed out of a split-S.
4) Use a dual rate transmitter if possible, with rates on ailerons and elevators.
5) Use retracts or use itsy bitsy tires to eliminate the steering effect that can occur when you yaw the plane with the wheels down.

6) Do not try to redesign the construction to make the plane crashproof. This is a waste of time and will only add weight, which is the enemy of any pattern plane.
7) If you end up with a Tipo which weighs over 9 lb dry, consider selling it and building another, lighter one. We can find no reason to build this design heavier than 8-1/2 lb. We have built many of them at 7-1/2 to 8 lb finished, including pipe. Remember, a heavy plane will not fly better through any maneuvers, and excess power will simply make it faster, not better.
8) Balance is extremely important if you expect to realize maximum performance, especially in rolling or point maneuvers. A nose heavy set-up does nothing but screw things up. Sensitivity is best handled by an accurate dual-rate radio.
9) Flaps are a questionable feature. They do work, they are fun to play with, and they can be hooked up to be used as dive brakes (a la Curare) or as coupled controls with elevator (a la Dave Brown). It must be understood, however, that they can cost you 7 oz in weight penalty, they must be postively equal in operation, they can vibrate, they can be adjusted (misadjusted) to cause weird pitch control, and they require some good linkage fabrication to work properly. Our personal recommendation is leave 'em off. The plane will be lighter and easier for most people to set up.
10) Do not worry about slight variations in wing size (outline) from the plan, but make certain both sides are identical. This rule also applies to stabs, elevators, ailerons, etc.

You will need only the usual tools plus some long, straight sanding blocks. If you are building a balsa fuselage, we recommend that you carefully fit all pieces and use cyanoacryiate adhesives as much as possible. The blocks (top, nose, etc.) are easiest to final shape if they are joined with polyester resin.

Buy, beg, borrow, or somehow obtain use of accurate gram scales and use them when selecting balsa. We will give suggested weights in each building step.

Install 1/4 x 1/2 x 12-inch hard balsa spars using epoxy (go easy on the epoxy!). Install plates using epoxy and sawdust to provide a bond between plate and spars. Wipe off all excess epoxy and trim parts flush when dry, using a sharp hobby plane. Do not sand this area, you will only succeed in making a flat spot on the wing.

Prepare balsa sheeting using 1/16 x 4 x 36-inch sheets which weigh less than 24 grams per sheet. I use 16-gram sheets if I can get them. If you plan on Monokoting the wing, use approximately 25-gram stock for safety reasons. Select and mark the heavier pieces for the left wing panel to offset engine weight..." 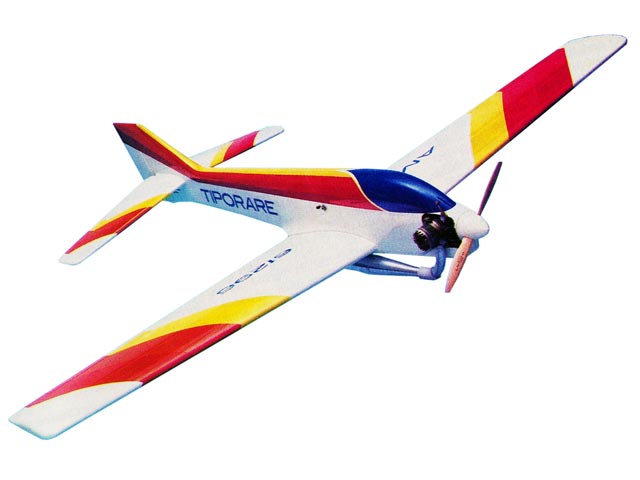