Quote:"Great Lakes Trainer, by Bill Northrop. Designed when rudder-only was all you could fit into a model of its size, the GLT is now a natural for small-size 3 and 4-channel radio systems. At 1-1/2 inch scale, it transports in one piece.

Two circumstances brought about this ego trip. For one, the feature R/C aircraft construction project originally planned for this month wasn't quite ready to publish. And for the other, we received our second letter in about 12 years from Everett Coyle, of Yuba City, California.

Everett's first letter, received while we were R/C editor of MAN, included photos of, and told about, the Great Lakes Trainer (oz10105) he had built from our plans and construction article in the June 1958 issue of American Modeler. Incidentally, AM was then a Street & Smith publication, with editorial offices in New York City, when Al Lewis, AMA's first president, was editor.

The second letter from Everett arrived just recently, and in it he enclosed some photos of the GLT he had built almost 20 years ago - still going strong after some minor facelifting and the addition of modern radio.

The Great Lakes was this writer's first commercial literary effort and first scratch design/building project - you might know it would be scale, and a biplane! Plans were drawn using Wylam 3-views as published in May 1956 MAN, and some construction ideas were taken from a control line GLT, possibly by Vern Clements, also from an earlier MAN.

Using standard free flight pro-cedures, we added stab area and wing dihedral - after all, this was to be rudder-only R/C, and when we say 'only', this means only - the length of engine run was determined by the amount of fuel in the tank, period! Incidentally, the original was powered (?) by a Mc-Coy .09 engine. Only a few takeoffs were ever accomplished - most flights began from a hand-launch. Very little R/C was needed, as the ship had a natural, wide turn to the left. You simply heaved it off a little to the right of the wind and calmly watched as it navigated the perimeter of the field, finally passing overhead to begin the second lap at about 25 to 30 feet of altitude - scale speed has been around longer than you think!

R/C in the original consisted of the great Kraft Single receiver, using a single IAG-4 'hard' tube. It required two 22-1/2-volt hearing aid batteries for the 'B' supply and two 1-1/2 volt pen cells in parallel for the filament, or 'A' supply. The remaining two cells in the 4-cell Acme battery holder provided 3 volts for the escapement. Rudders were primarily operated by torque rods in those days, so we devised the cute little 'L' shaped slot in the rudder to maintain the scale hinge line. It never gave us a problem.

The nose shape may seem a little strange. From previous experience with low thrust-line models, we decided that the normal upright engine version might give us some offset problems (having to use ex-cessive down-thrust), so selected the inverted Cirrus cowl, which raised the scale thrust line. Actually, the upright version looks a lot better, and the thrust is not all that different. Besides, with today's constant-trimming radios, why worry - simply invert everything forward of bulkhead 13, and relocate the motor bearer holes in 'B' accordingly.

Speaking of today's radios, the 1-1/2 inch scale GLT ought to be just a ball with rudder, elevator, and throttle. The extra weight and work of adding ailerons would not seem worth it to us. If you decide to go the whole route, drop the bottom wing dihedral to 1 inch and take it all out of the top wing. We haven't detailed a modern radio installation - they are all pretty much the same - just keep everything well forward. Surprisingly, the original model required a small amount of tail ballast; this in spite of nylon fabric covering and many coats of clear, orange., and black Aero Gloss dope.

The following construction text is taken almost verbatim from the original article... " 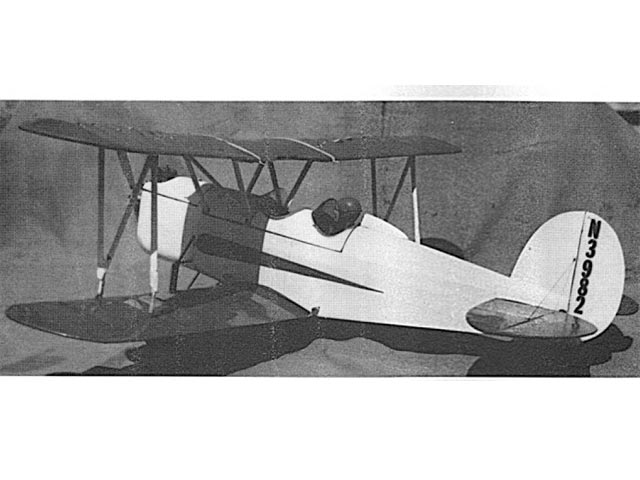