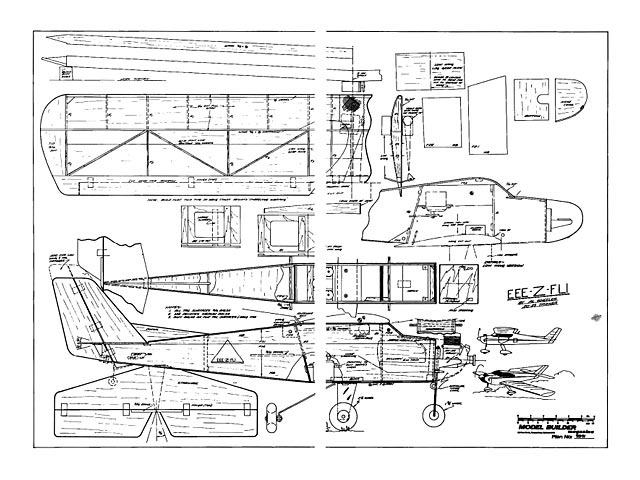 Eee-Z-Fli. Radio control sport trainer, for .20 - .25 engines. Can be built as either a low-wing or high-wing model.

Note this is low resolution plan.

Note this Oz entry is really just about the article, the text and the pics (which cover the first of the EEE-Z-FLI designs that appeared in MB). The plan itself is very low resolution, not good, and has a large central band missing from the scan. If anyone can submit a clearer scan of this plan, that would be great.

Quote: "Here's a simple, basic airplane designed to handle windy conditions and also to be tough enough to stand up to a beginner's abuse. A bonus feature is that it can be built as a high or low wing, trike gear or taildragger - take your pick.

Those of you who have visited and flown with uson the Hawaiian island of Maui are aware that our widely touted 'gentle trade winds' frequently become quite energetic, particularly during the summer months. Flying during these periods leaves the enthusiast with few choices; get up with the proverbial chickens and fly from 6 am till about 9 am when the winds pick up, fly a pattern type aircraft with good penetration, or pack it in and go home. Unfortunately, many modelers (and some well known editor/publishers) are not early risers, not all of us are into pattern aircraft, and those going home are often faced with mundane tasks like mowing the lawn, trimming the hedges, or worse.

Seriously, the least fortunate are the students, as most of the 'leading trainers' just plain blow away before they even get off the ground. The obvious answer is an airplane capable of handling the windy conditions in the hands of a student, one that is tough enough to withstand the inevitable knocks of training under adverse condi-tions and, most important, an airplane that introduces the newcomer to R/C flying as an affordable pleasure rather than an expensive task. Other considerations for those who like to build is ease of construction without a need for exotic materials and a basic structure that, should it be damaged, is easily repairable.

In addition to the foregoing, basic design goals are quite simple:

1. A landing gear that is 'student strong' and properly triangulated to prevent easy tip over when operating in strong winds and one that provides straight tracking and easy rotation.
2. A combination of airfoil and wing loading that provides stability, good penetration and minimized gust effect on approach and landing.
3. A control system adaptable to both the student's slower response requirements and the more advanced flier's aerobatic taste.
4. The completed model has to look more like an airplane than a 2x4 with a wing attached.

Although not initial design criteria, follow-on considerations have produced easy conversion from tri-gear to taildragger configuration and from high wing to low wing, using all the same basic components, and one set of drawings and building instructions.

The design and test phases have now reached the point where, with over ten aircraft in all variations flown extensively, we find that all initial design and performance criteria have been met, or exceeded. Perhaps the time has come to tell all windy weather fliers about EEE-Z-FLI, the Maui Wind Machine.

1. It is recommended that all parts be cut out prior to the start of construction, more like a kit.
2. Any installation item peculiar to the low wing version is noted in italics.
3. It is important that this wing be built flat, as this type of construction is rigid and resists corrective warping.

CONSTRUCTION: FUSELAGE: Select two matched sheets of 1/8 medium hard balsa. Cut FS-1 and FS-2 pieces from each sheet and edge join on a flat surface. For the low wing join FS-3 as shown. Cement FD-1 and FD-2 to the sides starting with FD-2. Position FD-2 1/8 inch behind the front of fuselage side; this pro-vides a slot for the firewall. Install FD-1 1/8 inch behind FD-2, this provides a slot for B-1. 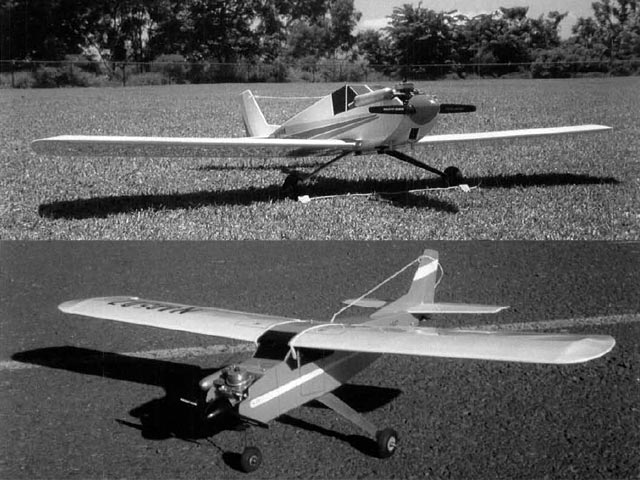