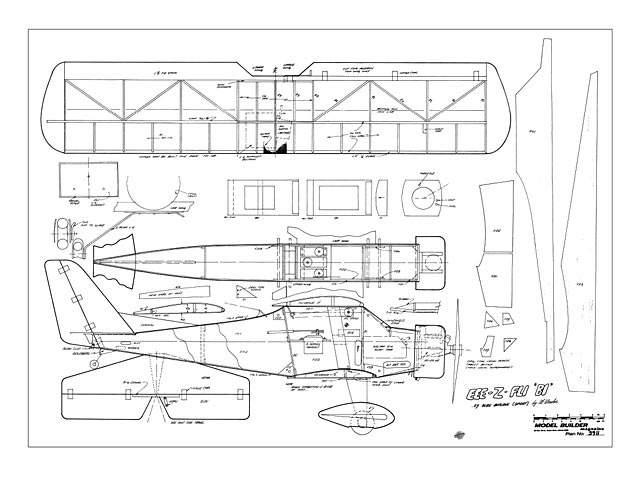 Quote: "Several years ago I sat in the back of my hangar at Schellville Airport, Northern California's mecca for homebuilt and antique aircraft in the beautiful Sonoma Valley. The object of my attention was a neat little 90 hp Lambert radial, recently removed from a Monocoupe to make room for a flat Lycoming. What an ideal engine to power a little two-place tandem bipe, the one sketched out on the hangar floor... Time passes and dreams slip away, people move to Hawaii and dusty hangars complete with their dreams sketched on doors and cement floors become a thing of the past. The dream of the little bipe remained and somehow the Lambert got traded for a Magnum .25 FSR and the welding equipment for a tube of model cement. So, throw in a little balsa wood, a roll or two of MonoKote and herein we present EEE-Z-FLI 'BI,' a somewhat dehydrated version of an old dream.

BI follows the basic Eee-Z-Fli (oz12170) construction techniques throughout. The fuselage, wings and tail group are of simple construction, providing an airframe of moderate weight and good abuse tolerance factor. Also, no need for aircraft Medicare; repairs, if required, can be accomplished at home.

Flight characteristics are pleasing, ground handling and tracking are without problems, and with a flight weight of 3.2 lb and a wing area of 532 squares, the Magnum .25 swinging a 9x6 Master Airscrew provides excellent performance. Ailerons, rudder and elevators may be adjusted to provide aerobatic capability to the builder's taste. So, clear the workbench, spread out the plans and let's scratch-build an exciting little biplane!

FUSELAGE: Edge join FS-1 and FS-2 to make two fuselage sides. Now install FD-1, 1/8 of an inch behind the front of the side piece. Using a piece of 1/8 balsa as a spacer, install FD-2 behind FD-1. The space provides a slot to support B-1. Complete both sides, being sure to make a left and a right.

With one side flat on the work surface, install B-1 in the slot provided. Install B-2 flush against the rear face of FD-2. Join the two sides by cementing B-1 and B-2 to the remaining side - use a square to assure alignment at the tail. Install the rear vertical members, FD-7, and FD-3,4,5, and 6. Drill holes for wing attachment dowels and cut slots for the rudder and elevator pushrods.

The firewall (FW) may now be glued in place with epoxy. Add vertical supports between rear face of FW and fuselage sides, also with epoxy. Now pull the rear end of the fuselage together, align carefully and ce-ment, holding with clothespins. Add rear fuselage cross supports at the vertical members and install the triangular block at the tai !post. The bottom of the fuselage from B-2 aft is covered with1/16 balsa. Cover the bottom from the wingcut out to the firewall with 1/16 balsa with the grain running fore and aft.

F-1 may now be fitted in place and the top skin, also 1/16 balsa, fitted with the grain fore and aft. Cover the top of the fuselage from B-2 back to the stab cutout with 1/16 balsa. Fit and install the stabilizer support pad.

The servo supports may be installed at this time. They mount to the top of FD-2, the rear one as shown and the front as required to accommodate the servos used.

The windshield may be fitted using any type of flat plastic sheet. Where the edges meet the fuselage sides, leave about 3/16 inch of extra material and bend it over the edge of a flat surface so that the edges lay flat against the outside faces of the fuselage.

The engine mount may now be posi-tioned as required for muffler clearance. Center the mount as marked on the FW drawing. The FW angle provides for the required down thrust (approximately 3 degrees). Drill mount holes and install blind nuts. The required holes for fuel and vent lines are shown, but the throttle control position will have to be determined by your engine positioning.

The cowling on the prototype was made from a plastic dog tablet bottle, 'Filaribits.' Cowl mounts may be made from aluminum angle as shown or, if preferred, wood sup-ports. Cut openings for cylinder head and muffler clearance, mixture adjustment and carb throat if required.

TAIL SURFACES: All tail surfaces are 3/16 medium hard balsa. Elevators are joined with 3/16 dowel as shown; join on a flat surface and be sure the leading edge is flat and straight. Cut hinge slots and cement hinges into stabilizer only. Join the fin and dorsal and install hinges in the fin and aft fuselage only. Trial fit stabilizer and fin to the fuselage. Sand all edges round and put surfaces aside for covering.

WINGS: Two things are unique about the BI wings. First, the upper and lower panels are identical with the exception of the ailerons in the upper. Second, there being no dihedral, the wings may be built flat with the bottom skins, spars, leading edge and trailing edge in one piece, tip to tip. This is quite a savings in time and makes for a super strong wing.

From 1/8 scrap balsa make skin supports for the area between the R-3 ribs. Cut to fit 1/16 inch below the top of the trailing edge. These provide a support for the rear edge of the center section planking. The area between the outboard R-3 ribs may now be planked with 1/16 balsa. End the planking at the center of the spar. Cut a length of 1/16 sheet for the leading edge, notched to clear the center section planking at the spar top. Wet the top side and install flush with the rear face of the spar. Assure adequate cement on the spar top, all rib tops and the top of the leading edge dowel. Tape around the leading edge to assure a tight joint.

The ailerons can now be cut from the trailing edges of the upper wings. Trim the inboard ends as shown and round the trail-ing edges. Cut hinge slots in ailerons and trailing edges and glue hinges in trailing edges only. Install actuating hardware as shown; DuBro strip aileron hardware may be used. Bend the actuating arm forward from vertical to provide clearance at B-2. Trim and sand the bottom sheets and top planking to form a round contour with the leading edge dowel. Make wing tips and install as shown. Finish sand the wing for covering. Epoxy the landing gear support plate to the bottom of the lower wing as shown. Epoxy servo supports to bottom of upper wing as shown.

LANDING GEAR: If your landing gear is not already drilled, lay out and drill according to the hole pattern in the support plate; if it is pre-drilled, drill the support plate to match. Shown is a typical wheel and pant installation; modify to suit your type of wheel pant as required. At the aft bottom fuselage area install a Goldberg or similar tail wheel support, bend the wire as shown and make an aluminum clip to tie it into the bottom of the rudder.

COVERING: Sand all surfaces a final timed round the fuselage edges to suit, remove all dust, and cover. The prototype was covered and trimmed in Super MonoKote. Mark and cut the covering from all assembly joints to assure a wood-to-wood cement joint.

ASSEMBLY: Cement stabilizer to fuselage, checking for alignment. Position fin on top of stabi-lizer with rudder temporarily attached and check alignment with aft fuselage, then mark and install fin. The elevators may now be permanently installed, followed by the rudder.

Install the servos and control pushrods. Complete servo-to-aileron hookup on upper wing. Install engine mount, engine, throttle control, landing gear, and fuel tank. Prior to muffler and propeller installation the cowl may be installed; additional trimming may be required. With the stabilizer level, the upper wing support should provide 0 degrees incidence and the lower wing saddle 1.5 degrees positive.

Do I hear questions? Remember, the lower wing is the leading wing, and as with most real-life bipes, we want the leading wing to stall first. The same principle applies to models. Adjust control travel as follows: elevators, up and down 1/2 inch; rudder, 3/ 4 inch right and left; ailerons, 1/4 inch up and down. Throttle travel as required to obtain full throttle and a satisfactory idle, including cutoff.

Roll the aircraft on the ground to assure straight tracking. Range check your radio and double check all controls for the correct travel in the right direction!Too many brand new models are stacked because the ailerons were hooked up in reverse. It takes a pretty hot pilot to detect this problem in time to save the ship and get it back down in one piece! Balance the model to hang nose low at the point indicated. Do not attempt to fly tail heavy!

FLYING The prototype has been flying on a Mag-num .25 FSR turning a 9x6 Master Airscrew, burning 5% fuel. When satisfied that the BI taxis well, add throttle slowly for take-off. Tracking on the prototype is good and the tail comes up by itself with neutral elevator trim. Liftoff is straightforward as is the climb out.

If you have a trim problem, throttle back a little and correct it. Once trimmed the BI tracks well, and even with the initial control settings is quite responsive. Approaches are normal at reduced throttle and flare and landing are normal.

The BI is fast at higher power settings and, with the control throws increased, it becomes pretty quick. The prototype has been flown under varied conditions of both weather and pilot ability and seems to live up to the EEE-Z-FLI tradition." 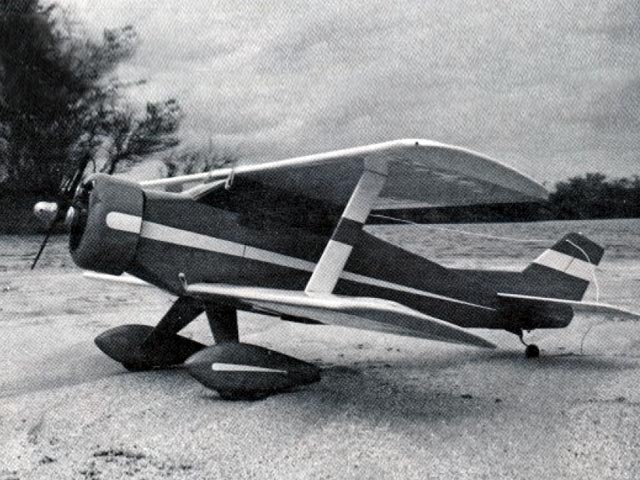