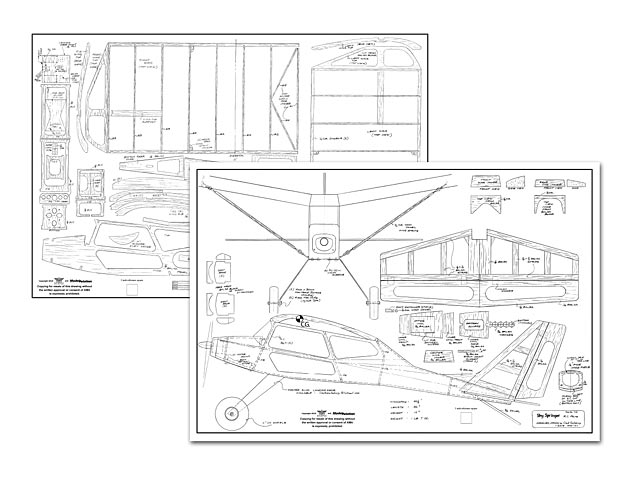 Note this plan is a free download, available from theModel Aviation site at http://www.modelaviation.com/clark-salisbury-skyspringer where it appears along with the full build text, full bill of materials, and some great build pics. Also a free download of the plan in tiled format.

Quote: "Before you build this little airplane, I need to explain why I dreamed of it in the first place.

In 2000, I designed an airplane called the SkyCrawler. I have since designed quite a few other airplanes, but the SkyCrawler is one of the slowest and most forgiving designs that I have done.

Because of its undercambered high-lift, high-drag wing, the airplane flies slowly, which is excellent for anyone who is learning to fly. The other characteristic of this design is the Short Takeoff & Landing (STOL) distance. Because of its big wheels, the aircraft can also be flown from grass at any park or soccer field.

The SkySpringer is simply a more modern-looking version of the SkyCrawler, using the same wing but with an enclosed fuselage. In this design, weight and size were critical because I wanted to be able to transport this airplane in the back of my Lincoln Mark VIII car or a trunk without detaching the strut-supported wing.

This airplane is a three-channel design instead of a four-channel with ailerons because the high-dihedral wing effectively banks well when rudder is applied. Just think of the rudder as “sliding” the airplane left or right, forcing the wing to bite into that air on either side and causing it to bank.

The SkySpringer is designed as a beginner, non-aerobatic airplane and it excels in that role. I recently began adding LED lights to my models, including cars, trucks, boats, and aircraft. Using two AAA rechargeable batteries to power the LEDs, I can now operate many models in the dark.

The SkySpringer, which “springs” into the sky, can be flown at night, although I recommend flying at dusk to get used to the lights before flying in total darkness. Let’s build!

When building the fuselage sides, glue the plywood pieces together so that both sides can be cut out at the same time with a scroll saw. In Figure 1, you will see how the drawing cutouts need to be added to the balsa block to cut out the wingtips. Make sure you build a right and a left wingtip. You will need to cut the 2 x 3 x 12 block in half to be able to make two wingtips.

When cutting out the wing ribs as shown in Figure 2, the 1/8-inch balsa can be stacked and glued together. Do not add glue except on the outside edges so that you don’t glue the ribs together..." 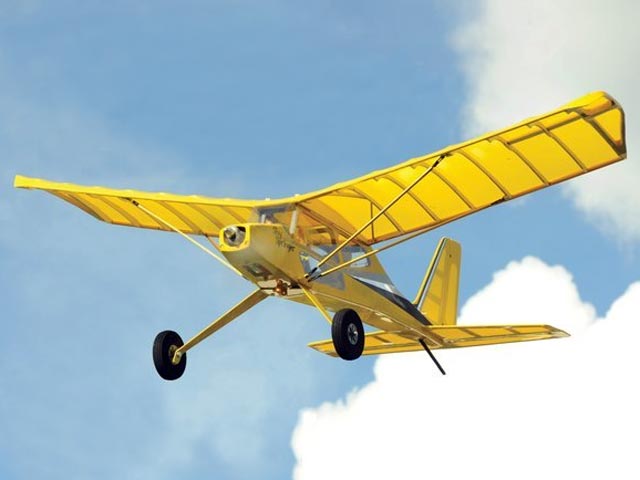