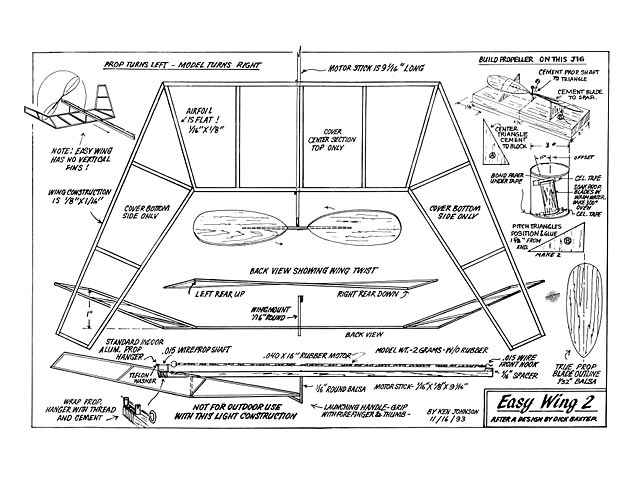 Quote: "It couldn't be much easier! This clever little flying wing builds quickly and is a real ball to fly. Try one!

This model was first seen about 10 years ago in the Paul Revere High School gym in Santa Monica, California. It sprang from the fertile mind of Dick Baxter, of Laguna Niguel, California.

Every so often, Dick comes to our indoor sessions with a new and wondrous flying machine. Most often he experiments with ornithopters, trying a new planform or some linkage that is completely original. I'm currently flying an ornithopter with a wing that wags its tail. It's one of Baxter's concepts. It won't break any duration records, but it sure gets a lot of attention!

My son Chris built an Easy Wing off of Dick's original plan. It flew quite well, even though it was quite heavy by indoor standards. It used a plastic propeller, the wood was heavy, and it was covered with regular Japanese tissue.

I decided to build a lighter indoor version to see how it would fly with lighter wood, a balsa prop and condenser paper covering. The plans were drawn to fit the magazine centerspread, but the model also flies well in larger or smaller sizes. I have a 6-inch version that flies great in my living room. Eventually I plan to blow it up to 40 inches for the Northrop Flying Wing contest at Taft each year.

One of the unusual features of this model is that it uses no airfoil and no vertical fin! What it does need in order to fly well is a generous amount of wash-in in the inboard wing.

CONSTRUCTION: The motor stick is made from medium hard balsa. A standard aluminum indoor prop hanger is bound and cemented to the rear of the stick. Form the propeller spar by sanding a 3-inch length of hard 1/16 square balsa to a taper at each end. The square balsa should be sanded round before tapering the ends. Fold a small piece of medium sand-paper in half and spin the balsa to the left and right while drawing it back and forth through the sandpaper, tapering toward the tip. When completed, drill a small hole through the center and insert the prop shaft in the hole. Bend the straight end of the shaft 90 degrees, 3/16 of an inch from the end, and ce-ment it to the prop spar. Build the prop jig per the plan. Cement the prop shaft to the upright triangle at the center.

Taper the prop blades at the edges to make them I ighter and form an airfoil shape. Soak the blades in warm wa-ter, then tape them, at a 15-degree angle off the vertical, to a 3-inch diameter can and bake in a 300-degree oven for 20 minutes. Place each blade on the triangles on the prop jig and cement the blades to the spar. When installing the prop on the hanger, don't forget to place a small Teflon bearing on the shaft between the prop and the hanger.

Build the wing over the plan. Add the dihedral to the wingtips. Cover the center of the wing on the top and the outer panels on the bottom.

The wing mounts are 1/16- inch round balsa. Allow the bottom 3/16-inch of the front mount to hang below the wing. Cut a small diagonal brace and cement it from the bottom of the wing mount to the center wing rib. This little triangle becomes the launch-ing handle for releasing the model.

FLYING THE EASY WING: Starting with a small rub-ber motor (about .040) 16 inches long, wind to about 600 turns and launch. The wing will begin flying in tight circles; an 8-foot circle is a good size. If the model tries to spin in, it means you need more wash-in in the inboard wing. The wing should climb to about 20 feet and go into its cruise. If it's not climbing high enough, make up a new rubber motor .005 thicker in cross section. The size of the motor your model needs will depend on how heavy you built it.

I don't recommend trying this model outdoors if you purposely built it light for indoor flying. It's too delicate for movng air. Build a stronger one for outdoor flying if you like. If you like the way the model flies, you might try a larger, lighter version with a rolled tube motor stick and a built-up propeller. Polyfilm covering would be ideal for this super-light wing." 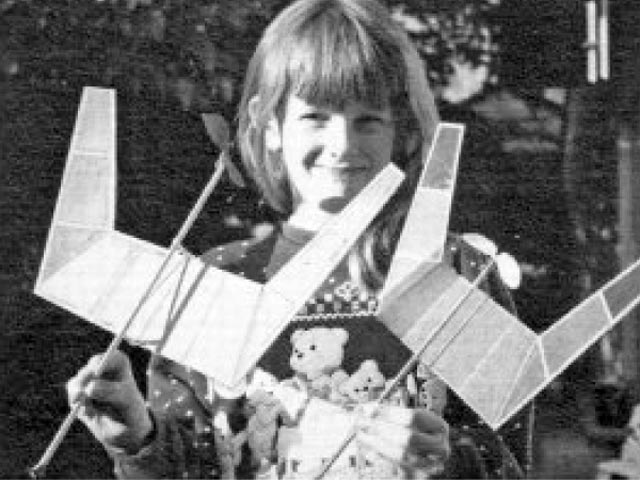