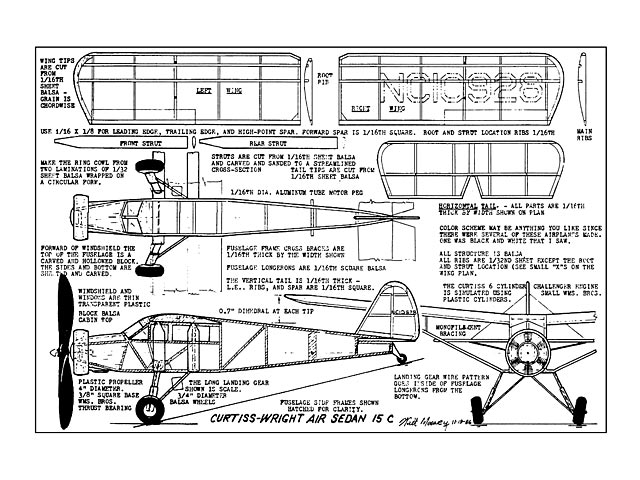 Quote: "Curtiss-Wright Air Sedan, by Walt Mooney. This month's Peanut is a design from the 30s reminiscent of many aircraft from the Golden Age. With a long landing gear and long nose, it should be a good flyer for you.

Reminiscent of the more widely known Curtiss Robin, the Air Sedan also makes an interesting design for a rubber-powered model. The general configuration was very popular in the 1930s Travelaire, Monocoach, and Stinson, all built airplanes of a similar shape. The Air Sedan has two characteristics that lend itself well to free flight rubber. For some reason its designers gave it a very long landing gear, and it has a relatively long nose. Covered with white tissue and decorated with black trim and numbers, it makes an attractive and nice flying model in Peanut scale.

All major structure, with the exception of the landing gear wire and the small diameter struts, is balsa. The jury struts, (small, vertical struts between the main wing struts and the wing), and the struts to the horizontal tail as well as the landing gear aft and inner struts are round bamboo.

The fuselage is built using the time-honored method of building two fuselage side frames (shown hatched on the plan for clarity), directly over the plans from 1/16-inch-thick balsa sticks. When dry, these sides are removed from the plan and are separated (it's almost impossible to keep them from getting a little cement between them during assembly if they are built on top of each other at the same time, but that seems the most accurate way of getting two sides just alike) using a thin razor blade. Cement the sides together at the tail post, and add cross pieces top and bottom as shown in the top view.

When the fuselage box structure is dry, the forward end is shaped by adding balsa blocks to the sides, top, and bottom, which are then carved and sanded to a circular cross section at the front. A Williams Brothers' plastic thrust bearing is just right for the very front end. Note that the top nose block is hollowed out and that this must be done before it is finally cemented in place. The forward end of the cabin top is carved from a soft balsa block also.

The Air Sedan was supplied with a variety of engines, one of which was the Curtiss 'Challenger,' which had six cylinders. Obviously it was two rows of three cylinders, and this is simulated on the model shown using Williams Brothers' dummy cylinders. The smallest available are used, and they must be shortened to fit inside the ring cowl. The ring cowl is made by first finding a usable dowel of a diameter to match the inside of the cowl.

A broom handle will work but may have to be wrapped with several layers of masking tape to bring it up to size. Wrap the forming dowel with waxed paper. Using some A-grain, 1/32 sheet (it must bend easily), cut several strips the width of the cowl with the balsa grain running cross-ways to the strips. Three layers of strip are wrapped and cemented around the form. When thoroughly dry, they are sanded to the cowl contour. Note that most, if not all, of the top layer will be sanded away..." 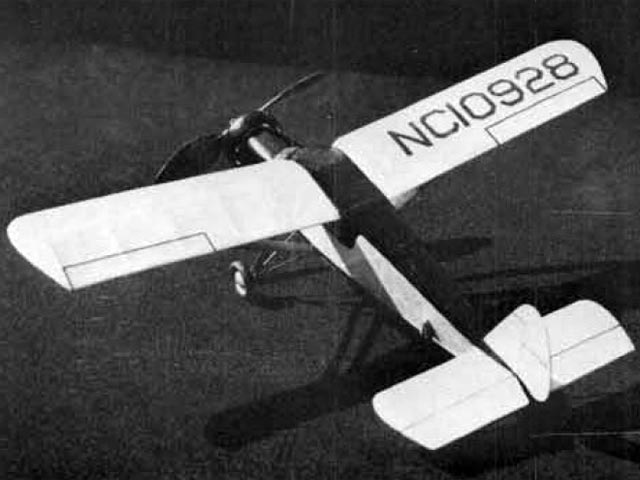