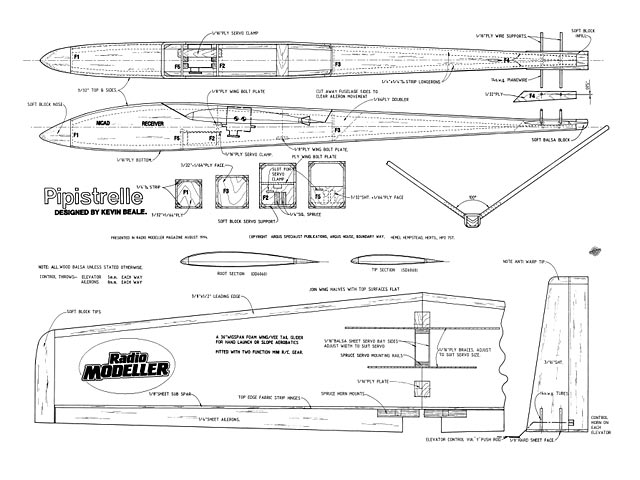 Pipistrelle was born because of a need for a small, efficient fun model to keep in the car for a quick half hour flying on my way home from work. I have had a couple of small models but all had something I didn't like about them. I also wanted to try a vee tail and the wing section (SD 6060) on a small model before committing myself to a larger, more expensive machine.

The name came from watching the bats in my back garden darting about catching moths for their supper! They are the commonest and smallest British bat, the pipistrelle.

The construction is fairly straightforward, just a bit fiddly. I will not describe in depth the build details but simply mention points of particular interest.

Fuselage: Cut the sides out, together with the 1/64 ply doublers, with the over wing hatch in one piece with a slot to suit the wing section. Glue in the formers, longerons and 1/16 ply bottom sheet.

Epoxy F4s and tail joiners in place. Great care is required to get the tail end set at the correct angle and incidence. Add the top sheet, nose block and tail block. Carve and sand to shape.

Trial fit the wing, without ailerons. to check alignment and fit of wing to top hatch seating. Note the hatch is not cut out until the fuselage is covered. painted and glued to the wing. This ensures an accurate fit of the hatch.

Wings: The prototype had blue foam wings although white foam would he strong enough. Cut them as accurately as possible and veneer. Cut slots for 1/16 ply joiners spaced to suit your servo and epoxy together. Note that it is best to build wings inverted to keep the top surface flat.

Add 1/8 aileron spar, leading edge and tip blocks. Cut ailerons to size and epoxy spruce horn mounts to each. Tack the ailerons in place with a small drop of cyano in three places. Carve and sand to accurate section. cut servo aperture and acid mounting blocks. Remove ailerons and chamfer to suit throw.

Tail: Cut out tail and elevator in one piece. Fit tubes, tip blocks and root faces. Sand to a proper section as shown then cut off elevators and sand to suit throws. The fuselage is covered in 1 oz glass/epoxy and painted with car paints. The wings and tail are covered with Solarfilm and trimmed with Solartrim. All hinges are Sylglass waterproof tape on the top surface.

Installation: The only unusual bit here is the fitting of the elevator servo in the bottom of the fuselage. The slots in F2 and F5 should be positioned so that a 1/16in ply clamp strap will slide through and hold the servo in place. The servo mounting lugs are held between balsa blocks to stop side movement.

The pushrod should be installed with only one leg of the rear linkage fitted. The second leg is tied in place with fuse wire and soldered when in position. Control throws are shown on the plan.

Note: Standard receivers and 500mAh batteries will fit but mini servos are required. The prototype had micro servos and 270mAh battery because that is what I had lying around.

Flying: The prototype weighed 16 oz with no lead and the CG on the rear position; an ounce of lead brought the CG to the forward position for test flights. A final check on the controls and from the back of the slope in 4- 5mph wind, she flew straight and level out into very light lift.

Climbing away with the 100 in floaters it was soon clear that the elevator was much too fierce as an interesting flick resulted if a lot of up was applied, at any speed. The stall was at very low speed and resulted in one or other wing dropping.

With the CG moved back and in better lift Pipistrelle is almost as manoeuvrable as the real bat. A lot of fun in a small amount of sky. Try one." 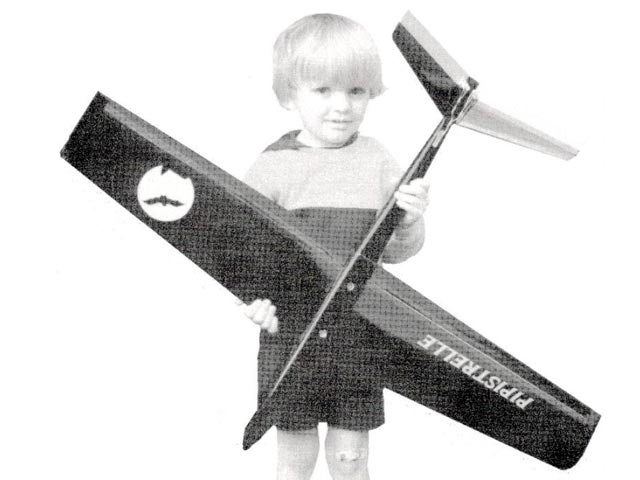