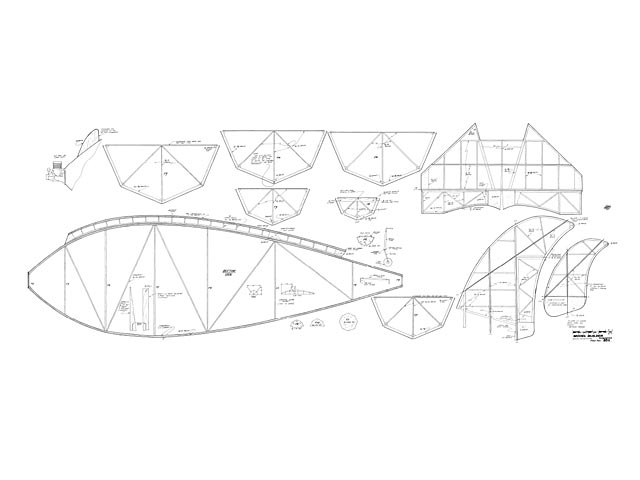 Those of you who have been involved in the sport of model aviation for 20 or more years may remember the name of Roy L Clough Jr. Between the years 1945-1968, Roy published no fewer than 70 articles on various types of models including, but not limited to, helicopters, autogyros, flying saucers, lifting bodies, hovercraft, ducted fans, pressure jets, jetex turbo-props, flying wings, slat wings, ring wings, radial wings, custer wings, tandem wings, and just about anything else you can imagine. His articles appeared in magazines such as Model Airplane News, Flying Models, Air Trails, American Modeler, Popular Science, Popular Mechanics, Science & Mechanics, and Astounding Science Fiction. A true genius, his designs were both innovative and highly unique, and to this day, you can still see the results of his pioneering work in the field of ducted fans and F/F helicopters, such as those marketed by Cox.

Since childhood, I've admired and been fascinated by the wild and wacky models he has designed, especially the rotary-winged stuff and the ones with a science-fiction theme such as the Venusian Scout (oz9730), the Moon Scout, Saturnian Space Skimmer (oz10877), and the subject of this article the Martian Space Ship (oz3863), which was originally published in the April 1954 issue of Air Trails magazine as a 30-inch long, 1/2A powered free flight. As is sometimes the case with an unorthodox design such as this, Roy did not initially set out to build a 'Flash Gordon' type spaceship, but was actually trying to perfect a flying blimp that used no helium. After the many modifications necessary to get the thing to fly, it resembled a 1930's type spacecraft more than a blimp and Roy went ahead and published it as such.

I'm quite certain I'm not the first person to attempt an RC version of this er, uh, 'aircraft' and, if memory serves me right, I remember seeing, in a later issue of Air Trails, a 1-1/2 size version with a single-channel escapement radio for control. It was a static photo and flight test results were not available. I also have it on very good authority, if you can believe this, that someone actually built a man-carrying version powered by a 65 hp. Continental. Again, test results are unavailable, although I have a pretty good idea of what happened if someone actually strapped himself in and tried to fly it!

Not to change the subject, but you might be interested to know that another of Roy's designs was very successfully adapted to RC by Fran McElwee and was featured in a construction article entitled 'Super Saucer #5' in the April 1973 issue of Model Airplane News.

Anyway, in regard to my version of the Spaceship, I was finally motivated into action (after having it for years in the back of my mind as a future project) by a sketch of it as the 'Mystery Model' in the April 1988 'Free Flight' column of this magazine, and by the statement a certain Editor/Publisher (who shall remain anonymous to spare him further embarrassment!) that this model could NOT be adapted to RC!

Being somewhat skeptical of the lifting ability of such a configu-ration, I decided that to fly properly as an RC ship, the model would have to be larger, built light and use a lightweight radio system. I constructed a double-size version following the original shape as closely as possible and made modifications only to allow the use of a landing gear (the 1/2A original had none) and the control system utilizing throttle, rudder and elevator.

To say the first flight was exciting is an understatement! As soon as the wheels left the ground the ship rolled violently to the left. For a split second I thought torque was the culprit and that my brand new creation was going to roll inverted and auger in! After reaching about 90 degrees of left bank, the roll suddenly reversed to the right until the model was at 90 degrees on its right side, then went to the left again and so forth, left, right, left, etc, swinging rapidly through a 180° arc while gradually climbing. I was able to make (I still can't quite remember exactly how!) a slow circuit of the field and get the thing pointed into the light breeze at about 100 feet of altitude. A reduction in power produced a gentle, near vertical, descent with the oscillation continuing until touchdown, whew!

Obviously something was not quite right! Although much more rapidly, the model appeared to be doing a classic dutch-roll. After some experiments with a couple of small foam spaceship gliders, vertical stabilizer area was added in the form of tip fins glued onto the ends of the horizontal stabilizer. The next flight was much better, with only a slight oscillation. Next, the forward fin on the nose (which gave dihedral effect on the F/F) was cut down to a stub..." 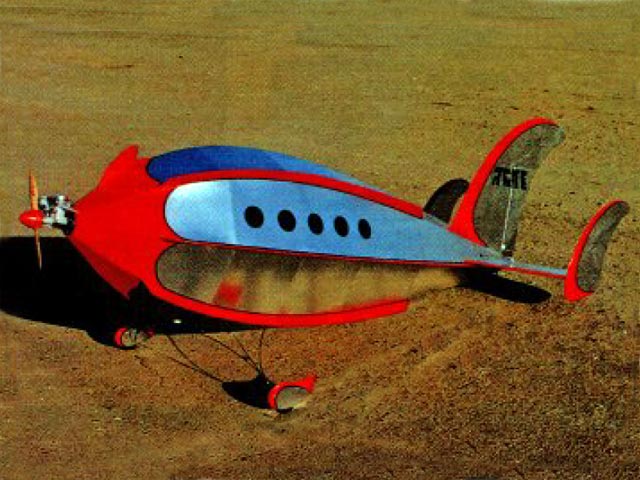