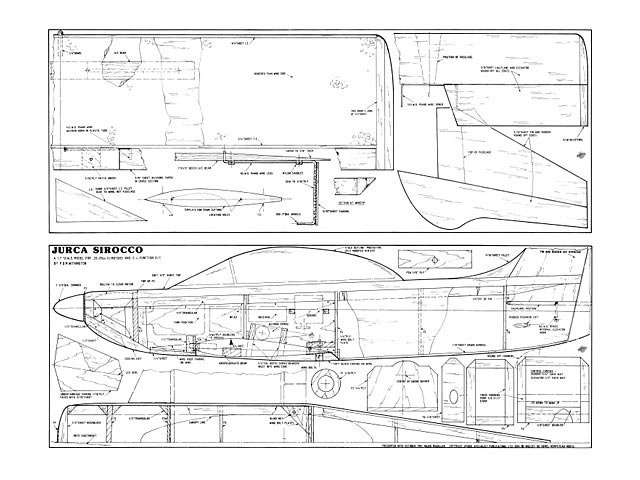 Quote: "Try this scalish replica of the French homebuilt by PDM Withington.

If a full-size aeroplane is designed so it can be built by a home con-structor then a model of that aeroplane should be a cinch to build! Such an aircraft is the Jurca Sirocco, a smart looking French homebuilt with a good acrobatic performance for the experienced pilot to enjoy. The model is just as aerobatic and, hopefully, just as enjoyable to fly. Incidentally, a Sirocco is a hot sultry wind blowing from the Sahara. This model is hot, worth flirting with but shouldn't put the wind up you! If you are looking for a small, acrobatic model with a scale appearance, then this could be the one for you.

One of the distinctive features of the Sirocco is that oddly shaped canopy. The shape can be approximated on the model by modifying a Micro Mold item and fitting it on backwards. Interestingly, an ex-owner of a full-size example told me that he had been talking to Marcel Jurca in Paris and had been told that the canopy of the full-size prototype was, in fact, the hood of a glider that was fitted on backwards to give headroom for the passenger! (If he was pulling my leg, don't write to me!).

Let's cut timber: Structurally the model is very simple and should present no problems to any modeller capable of flying it. The wing is in one piece (no dihedral as per full-size) and, being made of veneered foam with balsa LE and TE is virtually indestructible, fully proven by bad luck with the prototypes, I'm afraid, but at least I know that the models are tough! Ailerons are cut away after the TE has been glued in place and u/c mount is a very solid piece of hardwood glued into an accurately cut slot in the bottom of the wing with lots of epoxy. To simplify the wing, the LE extensions are simple triangular section strakes glued to the wing, but for maximum stiffness and strength note the grain direction.

To strengthen the TE tips, cut a slot with a razor saw and insert scraps of 1/64 ply. A drop of thin cyano holds it in place. Cover the wing with film. I did the underside first to hinge the ailerons but without covering the centre section so that the fuselage fairing can be glued in place firmly. The aileron torque rods and bearing tubes can be fitted now followed by the wing top covering. The original model was all film finished, including the markings, so this will take longer than it sounds but should be neater done now rather than when the model is complete. The mount can now be drilled for the u/c. Epoxy the retaining dowel in place and cover the general area with a bit of glass cloth and epoxy.

Tail feathers: Nothing unusual about the tail and fin, just butt join the sheet before cutting the shapes out. The anit-warp tips are important, LE and TE sections are shaped before the pieces are separated. The elevators are joined with 16g piano wire and I used a central horn of brass, silver soldered in place to give a hidden elevator connection. Cover the tail and fin with film now to make the finished job look neater. The rudder is centre-hinged and I used a tailwheel attached directly to it for ground steering. Rudder line is non scale as the real one has an enormous all-moving surface that I didn't like the look of.

Fuselage: Fuselage formers can be built up as on the plan or cut from sheet; the fuselage sides are cut from fairly hard stock and reinforced with 1/64 ply stuck on with Evo-Stick. They may sound to be so thin as to be not worth the effort, but they add a lot of strength with a little weight. With one side flat on the board, formers 2, 3 and 4 can be glued into place. The position of F2 will vary dependent upon the motor and mount used but note the built-in side and down thrust. It is best pre-drilled, too. When dry, the other side is glued on followed by the front triangular section. The rear can now be drawn together though it may be helpful to crack the fuselage sides just behind F4 and reinforce with thin cyano. Add formers 5 and 6, followed by the rest of the triangular stock. When dry, the top decking can be glued in place.

Temporarily slide the tail and fin in place, instal the servos and their rails and make up the pushrods. When satisfied, the underside of the fuselage can be sheeted and the tail surfaces removed again. Fit the motor and tank and the throttle servo pushrod/snake if used. The tank on my models has been glued in place with silicone after fuelproofing the tank bay - glued to one side the batteries can go alongside it. Try the wing in position and add the dowel retaining plate to the fuselage. Glue the bolt gussets to the fuselage and the ply reinforcement to the wing TE, drill the appropriate sized holes through the assembly after checking that the wing is true to the fuselage and bolt the wing in place.

The rest of the motor cowling and wing underside fairing can now be glued in place and carved to shape. The wing can now be removed prior to carving the rest of the fuselage to section (sort of rounded on top and flat on the bottom behind the nose). Cut away the cowl hatch and cover the fuselage with film. I retained the hatch with dress snap fasteners cyanoed in place. Finally, glue the fin and tail in place along with the canopy. The latter is a Micro Mold V73 cut and glued (with neat acetone brushed on) to shape prior to sticking to the fuselage. Paint the framework on the inside.

Flying: It shouldn't have taken too long to get to this stage but don't rush the pre-flying checks. Neither of my models needed lead to balance at the point shown which is at a good average point. You may prefer it a little fore or aft of this, dependent on taste - too far forward will result in a lack of pitch control on landing, too far aft doesn't bear thinking about! Do all the other normal checks, control deflections and directions, insurance, prayer mat, list of plausible excuses, etc! (It's not THAT hairy, really). Take off is a typical tail dragger; full throttle, full up and a little right rudder till the speed builds up, ease off the elevator and rudder, a touch of up and away she goes. The rate of climb was good when fitted with an Irvine .20 but an OS 28 FSR of ST 29 gives the model a true vertical climb and a very short take off run with no time to ease off from full up!

Roll rate is quick and fairly axial but inverted needs a touch of down elevator. Stall should be either very gentle or non existant with no sign of dropping a wing. Even with the model's very good low speed handling it prefers to be brought in to a smooth and apparently fast 'wheeler' type landing. Any attempt at the traditional three pointer seems to result in a heavy and bouncy 'arrival' due to an apparent inability to flair out at low speed. I fly over grass and used to worry that the model would trip over itself doing 'wheelers' but, in practice, this doesn't happen. Needless to say, touch-and-goes are fairly easy. The second prototype had plain flaps (4 in either side) and landed much more slowly though it still preferred 'wheelers'. The modification was well worth while but I didn't draw it on the plan as it complicated matters; the arrangement is easily seen from the photographs if you care to try it.

In summary the model is pretty close to a scale model, very aerobatic, very strong and, as a consequence, very reliable. My favourite manoeuvre is to give full up/down, full aileron and rudder at full throttle with the ST .29 pulling. The resultant flick roll has to be seen to be believed! Both prototypes have flown as regular weekend machines for many months now with no end in sight yet. Try one." 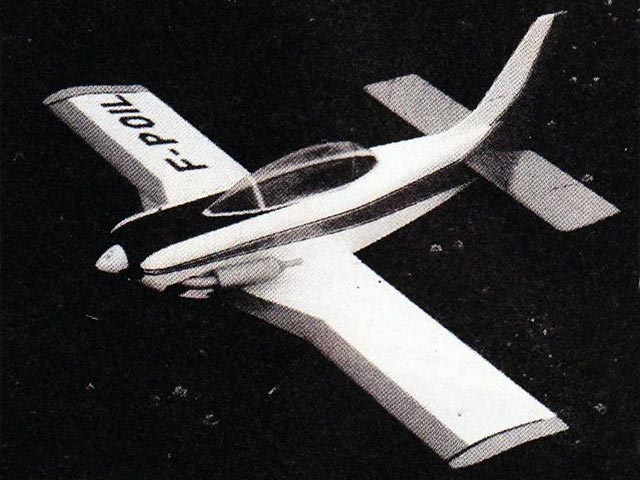