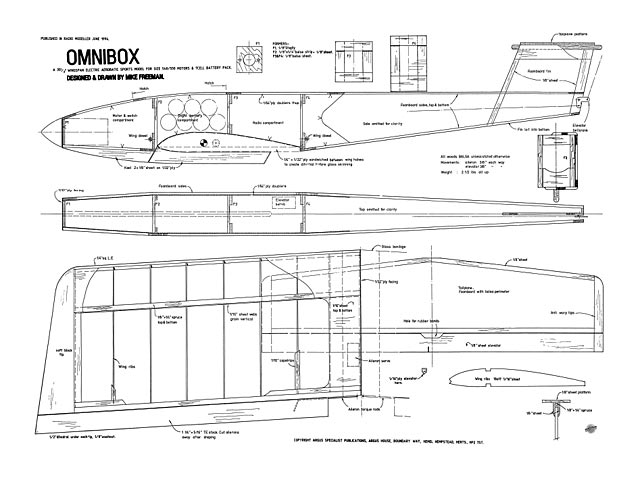 About three years ago I built a little electric sports aerobatic job to fly from a small field in our village. I have been so pleased with it that I thought I would offer the plan for fellow modellers to have a go. It's called 'Omnibox' (all box!) because of its boxy shape which is due to the fuselage being made of foam boards for cheapness and the wings being of constant chord for speedier building. The tailplane and fin are also made from foam board with a balsa edge all round for strength. There is no reason why the fuselage could not have been built from balsa with triangular fillet and rounded off corners but 'speed and cheap' were paramount in my brief.

It flies on a standard 540/550 ferrite motor and six or seven cells; it has on/off motor control and elevator/aileron. All roll,' pitch manoeuvres are possible and launching is no problem with the low wing as there is a 'keel' underneath to hold on to. Flight times are in the order of six to eight minutes depending on how you fly. If you haven't tried ek'ctrics before and can handle ailerons (ic you're not a beginner) have a go with Omnibox - it won't cost the earth. You never know, you might just like it and realise what you have been missing!

Fuselage: The fuselage sides, top and bottom are made from foam board available from stationers; this consists of two layers of card with foam in between. The thickness required for Omnibox is 1/8 thick. Cut out the sides and 1/64 ply doublers. Glue the doublers onto the sides using contact adhesive. Now mark all the former positions on each side.

Make up the formers as shown from 1/8 balsa (F1 from lite ply), then glue formers F2, 3 and 4 in place between the sides ensuring that all is square. When dry, draw the nose together and glue F1 in place.

Tailplane: Cut out and make up the tailplane and elevator from foam board and balsa as shown on the drawing. When dry, add the elevator horn.

Wing: Make a plywood template to the shape of the wing rib and cut out 18 ribs from 1/16 balsa sheet. Pin the bottom spar in place over the plan with 1/16 packing underneath and pin the trailing edge in place direct on the board. Cut out and glue in place all the lower sheeting and strips aft of the spar. Next, glue all the wing ribs in place ensuring they are all perpendicular, especially the root rib. When set, add the top spar.

When the glue has set prop up the tip TE to give the required washout. Glue the leading edge and top sheeting in place, and the vertical webs between the top and bottom spars. When fully dry, remove the wing from the board and add the remaining lower sheeting.

Now add the tip and sand the wing smooth. Cut away the ailerons and make up the torque rods. Then glue these in place using epoxy. Repeat the above for the other wing using the underside of the plan and using the other wing for a pattern.

With both wings made, glue in place and sand to shape the 1/32 ply wing root facings. Glue the two wings together with packing between to achieve the dihedral. Make sure the incidences are always the same. Leave to dry. Now cut out aileron servo box and line with balsa sheet. Finally, glass skin the centre section with 2 or 3 in wide bandage.

Covering and installation: Cover Omnibox using your favourite method - the original was covered with Solarfilm throughout. Fit the radio gear into the radio bay. On the original the receiver battery was located behind former F4. Note the offset aileron servo to miss the elevator servo. Install the motor (screwed to F1) and motor switch and wire everything up. Now hang the ailerons and elevator - 'Magic' tape was used on the original. Check for balance and correct movement then head to the field!

Flying: Launch is no problem, hold the keel like a paper dart. If there is no wind it may be necessary to launch from the run but normally a good chuck gets it away. The climb out is quite reasonable and a good height for aerobatics is soon reached.

As is the norm with electric flight you will have to respect the power you have available. Any attempt to increase the climb rate too steeply will reduce the motor run and thus the flying time per charge. By careful flying and almost letting the model fly to its zenith (this can mean the edge of easy visibility) it is possible to get flights of 10-12 minutes.

Having said that., Omnibox was designed for aerobatics and this is where it is at its best. All roll and pitch manoeuvres are possible (except prolonged vertical ones!) My usual flight pattern is launch, climb to about 40-50 feet, buzz about at low level for three to four minutes doing aerobatics and low fly pasts then climb as high as possible on the remaining power and glide down throwing in the odd manoeuvre on the way using gravity as the motive power. Then land using any remaining power to stretch the glide if necessary. Total flight time is six to eight minutes.

Landing is best done by coming in slow and easing back on the stick to stall the model onto the ground, the flying speed being quite low. Clearly, runway landings should be avoided! Crash resistance has been tested (not intentionally) with heavy landings and the occasional cartwheel with only minor site repaired damage sustained. The original has been flying since the end of 1990 and is still going strong. Happy landings!" 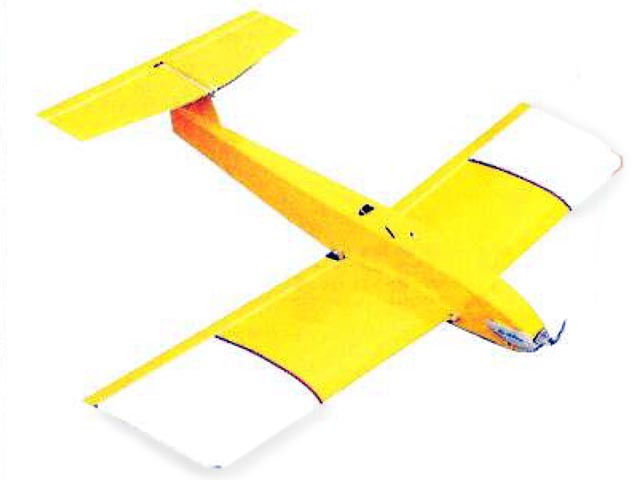