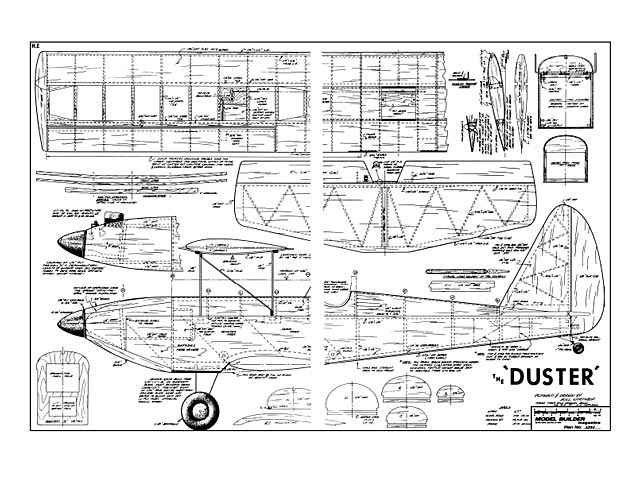 The Duster (oz1943) design first appeared in MAN September 1964. This here is a later reprint from MB in 1979, which includes only very minor modification (the addition of wing struts, for cosmetic appeal).

Note this Oz entry is really just about the article, the text and the pics. The plan itself is low resolution, not good, and has a large central band missing from the scan. The original MAN plan is much clearer than this one.

If anyone can send us in a good clear scan of this plan, of course we'll happily add it here.

Quote: "Duster, by Bill Northrop. One of the most popular designs by MB's editor, the Duster is a smaller version of the ever-popular Big John (oz2364). Article includes tips on how to modify the appearance to suit your tastes.

Back in April of 1964, at supposedly an early age (42) for such happenings. we experienced a myocardial infarction. Translated into clean English, that's a heart attack. Although such an occurrence is unquestionably serious, in our case, we walked into the hospital following the attack and didn't know for sure that it had happened until our doctor examined the EKG and convinced us that a hospital stay of several weeks was definitely in order.

The point of giving you the above sad tale is to bring out the fact that one bright spot during the enforced bed rest was a note from MAN's Walt Schroder saying that ourcurrent pride and joy, the Duster, a 7/8 size version of our prototype Big John (oz2364), was to be published in the September issue of that year. Incidentally, credit for the Duster idea goes to R/C pioneer Walt Good, who suggested that a smaller version of BJ might attract more serious builders, as in those days, good .60-size engines were in the minority.

This was back in the days of off-set printed full-size plans, which meant that one large size order of prints was made, and when those were sold out, the plan was simply no longer available. We became aware that MAN's supply of Duster plans was sold out several years ago when letters began arriving at MB's office, asking if original plans were available.

Our main reason for not republishing plans sooner was that we needed a model for photos to go with a new article. Oddly enough, we have had a Japanese kit for the Duster, using an exact copy of the MAN plans, and renamed the 'Flying King', but have never had the time to build it. (It's now being constructed by Editorial Assistant Phil Bernhardt.) Stupidly, we had completely forgotten about a completed Duster belonging to local modeler Tom Laurie, one which we actually test flew soon after moving to California! All of the photos. therefore, are of Tom's Duster, now powered by an OS 60, with Futaba radio, and blue and yellow doped silk finish.

One addition to the original plans is outboard wing struts. Though not needed for strength, they improve the appearance. Tom uses 1/16 dowels in the ends of the struts, which plug into holes in ply inserts set flush with the wing surfaces, where needed. This method isn't too good, as the wings can spread out, allowing the struts to pop out during maneuvers and/or when handling the assembled plane on the ground. An added hazard is that the loose strut end can (and does) punch a hole in the fabric when the wing panels come back to their normal position.

We prefer the system used on Big John and the Spruce Goose (T'Winger). In this case, the strut ends are shaped into plugs as part of the strut. These are about a 1/4 inch square. Ply inserts, with strut sockets cut out, are glued flush with the wing surfaces, at the appropriate locations, and a small wire hook is inserted and epoxied just forward or aft of each strut socket. After the struts are sprung into position, a rubber band is stretched between the top and bottom hooks to hold the wings together, keeping the plugs in the sockets.

Everyone likes to create some of their own modifications to a basic design, and to assist, we've added some suggestions for nose and tail variations. By cutting the nose off flush with the firewall, and shaping sheet aluminum brackets, a radial cowl may be added to the Duster. Our original model carried one of these, and the appearance was very striking. Unfortunately, we've not been able to locate a photo of this version: Also, we've included a sketch showing three fin and rudder variations, based on the Curtiss 'Fledgling', the Curtiss Hawk series, and the deHavilland biplanes. Add different stab and wing tip shapes, wheelpants, etc., and you'll probably be able to claim a model of your own design!

And now, with a considerable amount of correction and a whole lot of deletions (we were even 'windier' back in 1964), here is part of our Duster article from the September 1964 issue of Model Airplane News..." 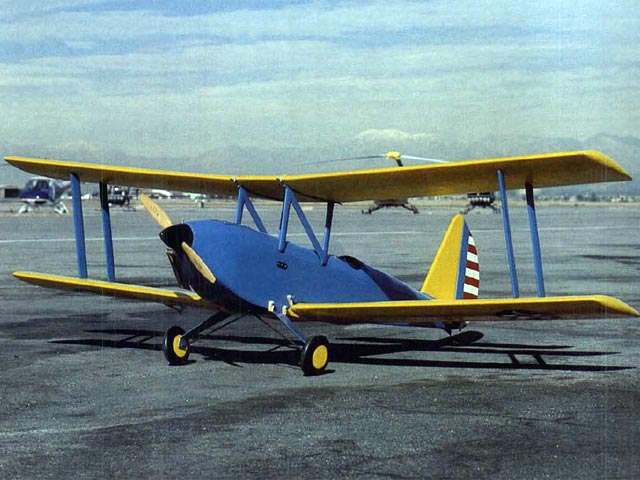