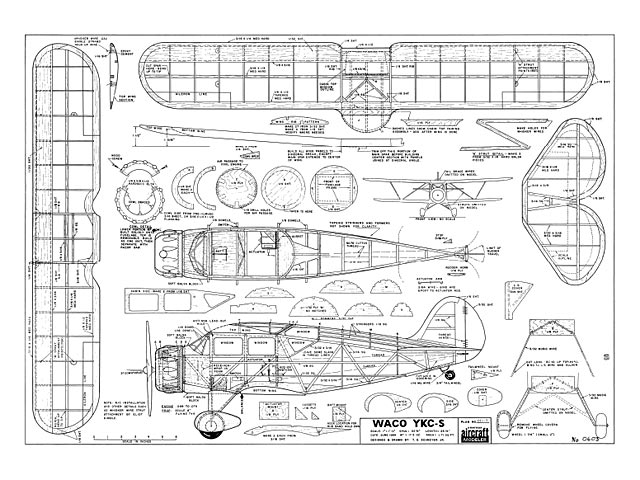 THE Waco YKC-S cabin biplane was chosen for a radio control flying scale model because of its similarity in planform to that of a highly successful non-scale biplane. The important features were a cabin fuselage for a rigid and sturdy top wing mount, plus a similar wing area, stagger, gap, dihedral, and equal and constant-chord wings, for easy building. The tail-moment arm and short nose also had to approximate that of the non-scale model. The Waco YKC-S aircraft fits the design requirements perfectly.

Eliot Kimble, long-time modeler, R/C enthusiast, and partner in this project, expressed interest in the Waco design possibilities as we flew the non-scale model. He went so far as to volunteer to build the model if I would draw up working plans. The photos show his handiwork.

As the model took form, Eliot worked out the details of R/C installation, strut attachment, cowl construction, and so forth. Covered with blue and yellow silk and clear-doped to a lustrous finish, the Waco has an eye-catching appearance and often steals the show from the bigger multi jobs at the local flying field.

The real enjoyment comes when flying the Waco, for it has a smooth and steady powered flight, easily controlled with the pulsed rudder system. The glide has a gentle, almost floating, quality. We wondered whether it might come out too heavy, but at 17-1/2 oz it flew beautifully, even with the 049 at reduced power.

Actually, the Waco could be flown free flight, but the addition of the simple and relatively inexpensive rudder-only R/C system makes it much more enjoyable to fly. With rudder control the model can be turned, circled, dived, and put through other maneuvers at the pilot's command. Best of all, the model can be landed near at hand.

The Waco has proved to be an excellent subject for rudder-only because it has the good maneuverability of a biplane and the reserve stability that makes even low-altitude turns in the landing approach an easy matter. Those who decide to build the Waco will be pleasantly surprised to find that a scale job can perform as well as a functionally designed model.

The R/C equipment consisted of an Adams actuator with a double-arm added to work two threads to the rudder horn, a Controlaire-5 receiver, add-on switcher, Ni-Cad button battery, and on-off switch. A super-regen receiver was used, but a superhet receiver would be better for near-city or crowded flying sites. An escapement-operated R/C unit will work well in the Waco. However, the pulsed system gives smoother flight control.

An 049 engine gives satisfactory and realistic flying performance. It is recommended that an 049 be used to properly adjust model, R/C system, and flier to each other. For those who want more power to put their model through loops, rolls, or other maneu-vers requiring power in excess of normal flying, an 06 or 074 would be right.

It might do to mention a few things the author found by experience with biplanes. Since there are really four wing panels developing lift and providing lateral stability, careful alignment of these panels is necessary, as is the elimination of warps, with the exception of washout which will be mentioned later..."

Update 21/11/2018: Replaced this plan with a clearer scan, thanks to firefly's post on HPA see http://www.hippocketaeronautics.com/hpa_plans/details.php?image_id=10681. Minor dusting down and cleanup.

Note for more about Ted Schreyer's design process, see the Bippie Bipe (oz6781) article which adds a little detail on the development from the preceeding model to this, the Sperry Messenger, then on to the later Bippie Bipe GG design. 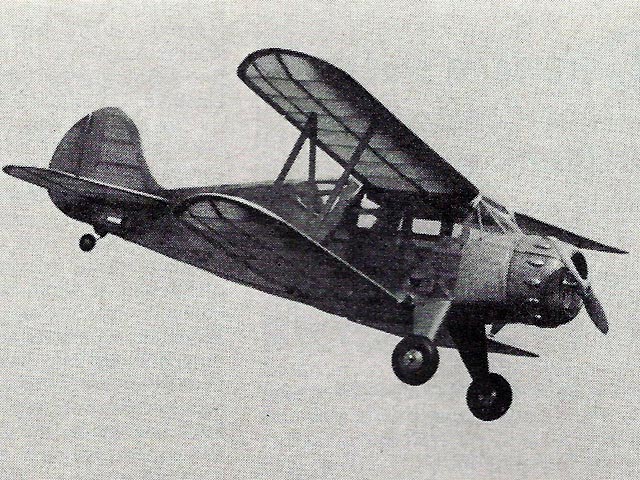 Nice to have a better, clearer copy of this one. This has been a favourite of mine since I first saw 50+AirYears' scan back in 2011. It's that second pic showing the stringered fuselage with nice tight covering. Very tempting to have a go at this one - and its a perfect size at 34 in span.
SteveWMD - 21/11/2018
Add a comment