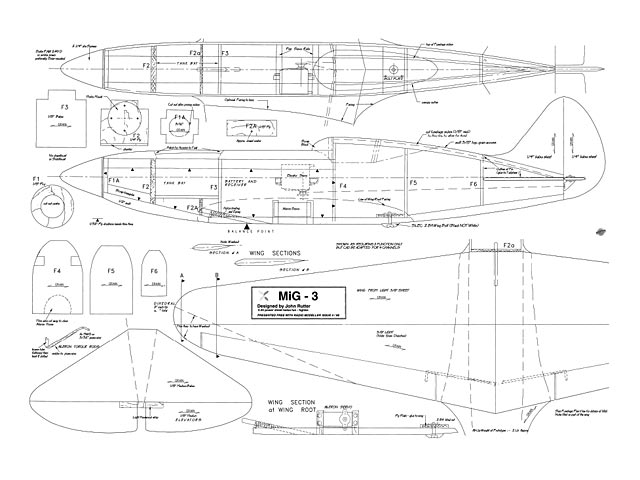 I first looked at this design as a suitable model around 12 years ago. I even drew it up at about the same size as the model presented here for foam wings, but somehow I never quite liked it enough. Time and technology march on though, so when I discovered that I could 'tile' any drawing to any size and print it out from my computer, I had another look at the MiG. The end result of all this was that I traced and drew up structural drawings on Christmas Eve of 1997 and built it on Boxing Day! I got a bit diverted on the day in between, some sort of family day and I wasn't allowed to play with MY new toy!

Construction is obviously very quick and mostly very easy, though I can imagine some readers looking dubiously at the all-sheet wing. If you choose the right grade of wood it really isn't all that heavy and I've yet to have an all sheet wing that didn't work well in the air. It is also incredibly tough as well as very easy to repair, if you do manage to dent or snap it.

Flying: First, the best bit! How does it go? The answer has to be very well. My PAW 2.49 is a bit feeble (getting a bit tired perhaps) but still with enough power for much greater than scale speed and as this model at around 2 lb is 8 oz lighter than my Spitfire Mk22 (oz9984), the climb is still good. Anyway, you can still buy a PAW 2.49 in various versions. As regards control throws, I found that 10 mm is more than enough on the ailerons for very rapid rolling (rates off) and 6 mm is smoother (rates on). In similar fashion the initial 15 mm of elevator throw was reduced to 10 mm each way - this is still more than enough for very tight turns. especially if the CG comes out a bit aft of the one shown.

My first flights were on a typical Hartlepool calm day, it was almost dark (at midday) with overcast and raining! I could actually have done with a bit of breeze to give the model a head start, as I found it has a tendancy to drop from a less than good hand launch in calm conditions. I'd recommend having a helper launch for you - I don't usually have that luxury! A nice bendy nylon propeller is also useful, it's far less likely to snap on contact with the ground than a glass filled one.

Once in the air the model quickly settles into a brisk climb and is quite stable in between manoeuvres. I've flown it in very blustery conditions that have grounded other models but the MiG remains pretty steady. Roll rate is higher than a lot of sports models, dependant on the throws of course. and the 'bank and yaw' turn rate would bring tears to the eyes to the pilot of a real plane. The early flights with loads of elevator throw showed that the model can drop a wing if you are violent with the elevator, so I took it home, reduced the throws to those mentioned and carved a bit more washout into the wings! The model is capable of any 2 channel manoeuvre I can think of, although of course, constant inverted is impossible without a clunk tank. Rolling the model inverted and holding it there (it only takes a modest amount of down to keep the nose up) is a good safety feature in my opinion, as it gives you a chance of stopping the motor - you can't do this with a clunk tank.

Perhaps the most enjoyable manoeuvres are those that involve a half roll to dive past in a low turning pass followed by a rolling climb out - it looks very realistic, if smoothly done. The glide is fast and quite flat..." 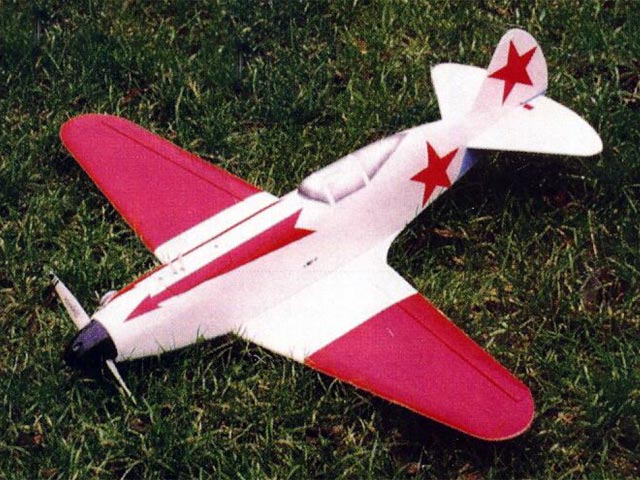