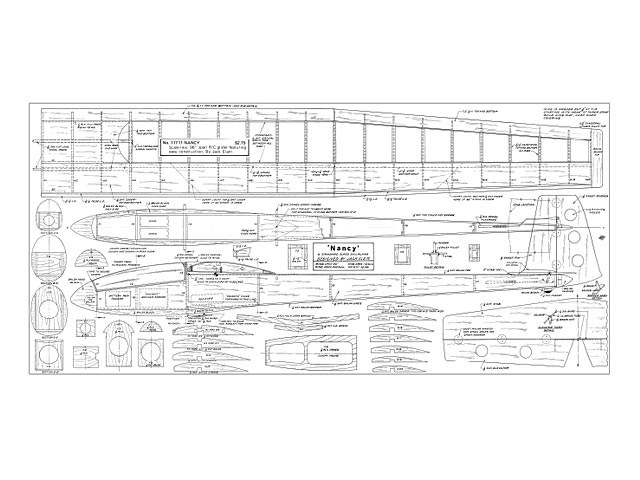 Quote: "Dance with Nancy. This scale-like R/C soarer was designed to be quick and easy to build, yet maintain pleasing lines. The objectives were accomplished - with a bonus thrown in - its flying capabilities are above average.

Nancy is a bird 'hatched' out of sheer necessity. As any of my friends in The Harbor Soaring Society (of which I'm a proud member) will tell you, my lack of skill and confidence could set the flying of R/C sailplanes back twenty years. My first attempt was my pal Bob Hahn's design Lil' T (oz3749) and it flew great until I stalled it out coming back toward myself - reversed controls and augured it in smack dab on the white divider line on the highway below the cliff. Most people would have been smart enough to tackle a Nordic type trainer next, but not old Hot Thumb. We had to try a fiberglass Phoebus. Beautiful and fast, but any lack of talent on the stick and you had a problem.

After looking long and hard at kits and plans I decided to attempt to design and build my own, with these criteria; easy and straight forward to build, pleasing lines that would hopefully resemble a full size sailplane, clean and fast for good penetration when needed, able to be flown slow for light lift, and most importantly, forgiving of some of the impossible positions that only I could put it into without radical stalls and falling off on one wing.

Nancy 'flew right off the board' (how's that for an original saying). She has done all I could ask as a nice docile trainer for me, but little did I know her real potential, until in the expert hands of my friend John Donelson.

John flew her to 4th place in Standard Class at this year's Nationals in Chicago and then a few weeks later placed 4th in Precision, 2nd in Duration, and 3rd Overall in 'The Big One' - The League of Silent Flight Soaring Tournament at Livermore. Nancy turned out to be quite a dancer with the right partner. I've been happily surprised by a few people asking for plans and in particular The Model Builder, so here you go.

Hopefully the plans are more or less self explanatory, however a few suggestions. The airfoil, wing and tail areas, nose and tail moments were designed with helpful counsel from Bob Hahn and John Donelson, both famous as designers, builders, and winning flyers, so stick to these. If you want to change wing tip shape or use your own particular shape for the nose blocks, go ahead. You may not want to make the soldered brass rudder and elevator horns. Use conventional nylon but make certain you have plenty of throw. Retain the angle of incidence shown for the wing, and zero for the stab. Minimum dihedral was used without loss of agility in turns; too much detracts from a sailplane's appearance.

The original Nancy was built with a one-piece wing, in which case dihedral braces B-1 and 2 are used. If your transportation size is limited, build the wing in two pieces, using 5/32 music wire bent to the same angle as B-1, and brass or fiberglass tubing.

Regarding the canopy, it can make or break the beauty of your ship. The plans show how a Fliteglas Phoebus canopy which we happened to have (remember glider number two?) however, Francis Products has one for their Cirrus which is beautiful. Large Sig or Du-Bro canopies will work fine also, take your pick, but get the canopy before you start carving the nose area, then you can blend the shapes of both more accurately to your taste. Try and use care and keep the beautiful compound curve in mind when trimming the canopy..." 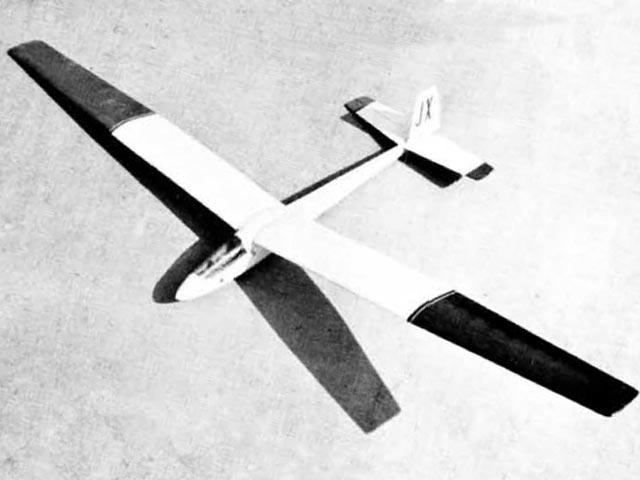