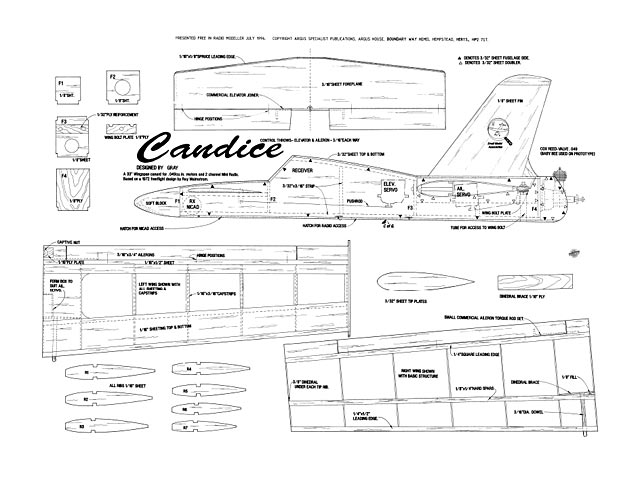 Quote: "A 33 in canard sportster for .049 engines and two-channel mini R/C, based on an original 1972 free flight rubber design by Ray Malmstrom - this version by 'Gray'.

Do we need to introduce Ray Malmstrom? His fertile mind has created flying devices of fancy over the years and at a splendid rate. 'Candice' is a fairly new 'Malmstrom' from 1972. Despite being a pusher canard, she rates about five out of a score of ten on the off-beat scale as far as Ray's output goes!

There is a precedent: Ray Malmstrom's rubber powered Miss Flighty appeared in Aeromodeller in the mid '60s. Shortly after, another modeller published a rudder-only 049 powered version the Miss Flighty II (oz8519) followed by Dereck Woodward's PAW 149 aileron/ elevator version - seen pushing the envelope at Old Warden before Dereck's departure to the USA.

So, in tribute to Ray's genius, I present my slightly scaled up version of the Candice (oz5532), hopefully in keeping with Ray's ideals of small, fun and unique models, I kept the size down and a Baby Bee, hardly the most powerful Cox engine, powers her well.

The idea of publication did not occur until Old Warden Small Models Day, 1993. After our first flight. Candice and I were force-marched into the Argus Control Tent and presented to Alec Gee. Alec, being a man of taste, took a look at Candice and asked when the plan would be ready. It's taken long enough, but we're here. Don't just loaf around - find the little wood needed and get going!

Wing (the big one at the back): All the ribs are drawn, there's not that many, so cut them out first. With the symmetrical section, first glue the ribs to the lower spar then use a length of straight 3/16 under the ribs' rear ends as a jig before adding the top spar, trailing edge etc.

With both panels complete bar the bottom centre section sheet, join them, noting the 3/8'. dihedral under each tip. Then add the centre brace and 1/8" fill-in to accommodate the spar sweep angle. The servo box can now be fitted - the smaller the servos used, the better - and fit the torque rods, ailerons and fixed trailing edge sections.

You can buy suitable torque rods - American Carl Goldberg 3/32 torque rods are available here - or make them from 16 g wire and matching tube. The pushrod connector is flattened, drilled for the pushrods and soldered to the wire torque rod. These are light, custom made for the job and, correctly bent, give no differential action. By the way - put the bearing tube on before you make the second bend!

Run your sanding block round the structure and, when happy, add the tip plates. These came off the original, naturally. All that remains is to drill the holes for the two wing mount dowels, using the fuselage and F3 as a jig to get the holes spot-on.

Tailplane (the little one at the front): The elevator joiner is still available at enlightened model shops - it's a control-line unit. It allows an internal pushrod which looks far tidier than a dowel joiner and external pushrod. Making one up is easy, as long as the builder can silver solder. Soft soldering is not strong or dependable enough for this critical joint. The hardvood leading edge will prolong the life of the leading edge's shape considerably for little penalty in work or weight. If you fly off a rough site, you will soon regret leaving it oft! Sand to the flat bottomed section shown and that's it. At the size and speed of 'Candice', this fulfils the need for the foreplane to stall before the mainplane. This gives the canard its charming and safe handling in pitch, the foreplane stall causing the nose to pitch down, restoring its own lift and keeping the mainplane clear of its own stall angle.

The fuselage: This reflects Ray's original - it's simple and boxy. Hence it builds fast, too. Little ply is involved and there aren't that many balsa pieces, so cut the lot out and go from there. The 3/32" sides, from light, stiff sheet..." 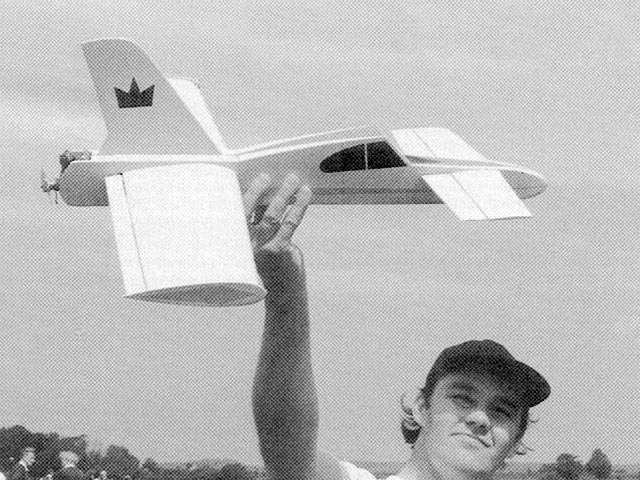 It seems the name 'Grey' was misspelled throughout the printed article in RM, and the correct name is 'Gray'.
SteveWMD - 01/05/2020
Here was I searching for the above plan/article this morning and it appears on the site in all its glory less than 12 hours later. You folks must be psychic, thanks very much for that it's much appreciated.
IanM - 01/05/2020
My electric candice pictures. With front-mounted motor [more pics 005, 006].
Avi - 22/07/2020
Add a comment