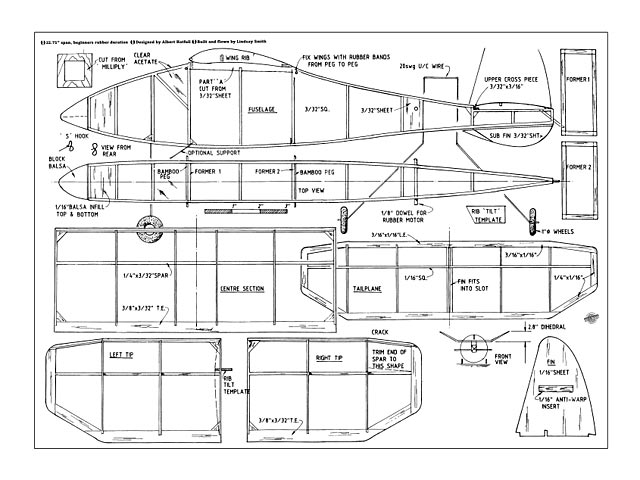 Whilst on a visit to relatives and friends in East Anglia, I enjoyed a visit with Albert Hatfull, the famous designer of many models in the Keil Kraft range of yesteryear. We were looking though one of his portfolios of past designs, some of them never kitted or published, when this little gem appeared. Named Oscar after a little dog he once owned, it appealed to me instantly, for two reasons. Firstly, it is an ideal first rubber powered model - and secondly, given the increased popularity of the under 25" wingspan class duration competition for small field sites, it could be a real contender to the Achilles and Commandos which dominate the class at present. So, I begged a copy of the plan from Albert, took it home and built it.

As this is an ideal beginners model, I will go into some detail of the construction sequence. Experienced builders can skip this bit and get on with it!

FUSELAGE: This is built from 3/32 square strip. Select four strips of medium hard balsa of equal stiffness. To do this, take a bundle of strips and lay them side by side overhanging the edge of your building board. You will see that some droop more than others. Pick out the four that droop least and use them for the longer parts of the fuselage called longerons. Trace Part A, the wing seat, and cut two from 3/32 sheet. Do the same with shape at the rear of the fuselage with the hole in for the rubber peg. It is best to hold both these pieces together and, pierce them with a drill bit, or sharp pencil, to get the holes matched. Cut out the shapes at the front of the fuselage in the same way.

Now we are ready to start construction. The first thing to do is to prevent the framework from sticking to the plan. You can either lay cling film over the plan or rub the plan with a wax candle end. Now, pin one of the 3/32 square sticks over the lower longeron. Pin part A over the plan and cut the two top longerons to size and pin and stick them in place. Now, cut the uprights to length checking the fit and cutting two of each to ensure that both sides are identical. Fit the rear motor peg piece and nose piece and leave to dry. Note that the short upper longeron under the tailplane butts up against the upright next to it.

Whilst waiting for the first fuselage side to dry, amuse yourself by cutting out 12 wing ribs. The easiest way to do this is to make a template of ply using the shape shown on the fuselage side view, then use this template to cut 12 blanks the same shape with the notches for the 1/8 square leading edge, 1/4 x 3/32 main spar and 3/8 x 3/32 trailing edge, accurately cut to ensure the ribs are identical. Put them all together side by side and pin them together with two pins, true up the notches - and sand the top and bottom surfaces. Set them aside.

Back to the fuselage. Build another side on top of the first, on the board, and leave to dry. Now cut 2 each of the cross pieces shown on the fuselage top view, two of the 3/32 sheet shapes at the nose and two of the long thin triangles at the tail. Construct formers 1 and 2 over the plan from 3/32 x 1/8 strips.

Now comes the first tricky bit! Carefully release the two fuselage sides from the plan. If the candle wax or clingfilm hasn't worked, slide a razor blade between the plan and balsa, but be careful not to slice into it. Now separate the two sides but leave them stuck together at the tail. Now glue former 1 between the uprights at the front of the wing seat, with its top cross piece facing to the wing seat piece A. Leave to dry, then stick former 2 at the rear of the wing seat in the same way, but with the cross pieces facing forward..." 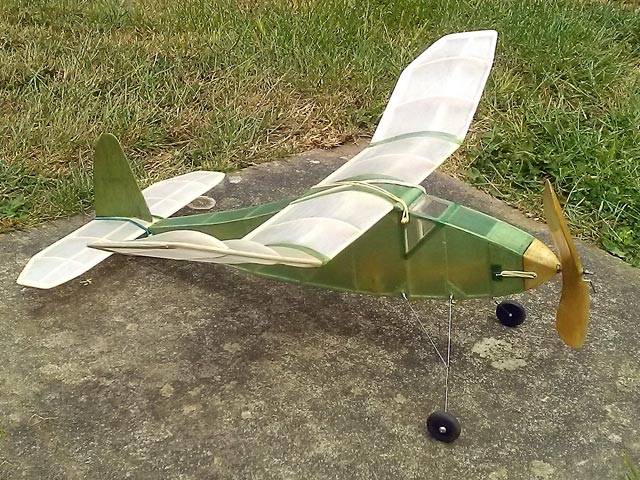 Good afternoon Mary. I hope you are both free from lurgys. Some pictures attached of Oscar [main pic, 003,004]. Another great little model for my small meadow although I think this one could escape quite easily.
Thanks for your continued hard work to give us something to keep us going in these strange times, it is much appreciated. Very best regards,
Trevor Tabor - 08/06/2020
Hi Mary, I couldn't resist having a go at Albert Hatfull's Oscar, after you posted pictures of Trevor Tabor's lovely model. Here are a couple of pictures of my effort [008,009]. I even had to copy Trevor's colour scheme! Regards,
Len Bridge - 28/07/2020
Add a comment