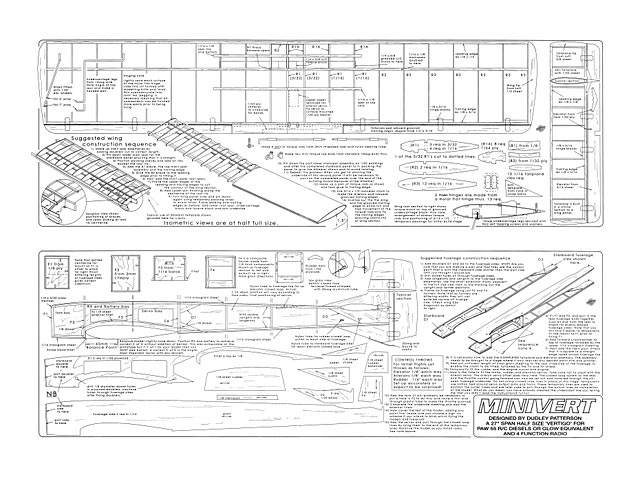 Quote: "About thirty years ago (was it really that long?) I built Frank Van Den Berg's Vertigo, to the front of which I nailed a twin plug Merco 61. That old Merco was not the most powerful of beasts, it was rated at seven pounds static thrust but after discarding the plastic Merco carburettor and fitting an aluminium Kavan carb, it was an extremely reliable and easy starting motor. As an aside I remember my shock and disbelief when a retailer at the Sywell Symposium (forerunner of the Cranfield and Leicester shows) relieved me of four pounds sterling for the Kavan carb. So, a motor with seven pounds of thrust in a model that weighed in at a little over five pounds!

The first flight was very interesting. Frank had shown an extremely long elevator horn on the plan which I replaced with a standard Micro-Mold horn. Like all 'club experts' I knew better than the chap that had designed the thing!

So, what was wrong with using the outer hole on the standard horn? Well, you must bear in mind that in those far off days of proportional radio control there was no such thing as servo reversing or rate switches and a lot of the servos had linear, rather than rotary outputs. To overcome the 'handing' of servos the manufacturer, Skyleader in my case, usually supplied a radio set with three servos of one orientation and one servo with the reverse orientation. This 'reversed' servo would be marked with a coloured dot. It was usual to sort out the ailerons first in a new model as you had the choice of either hand servo, the ailerons would normally present the biggest headache if you got to them late in the installation with only one 'hand' type left and needing the other. Without rates a linear output servo obviously cannot have the volume of its output altered, at least with a rotary the output can be taken from differing radii on the disc, thereby altering the volume.

So, I took off with nearly double the elevator throw that Frank had intended. It must have taken all of 3.2 nano seconds for me to realise that I was wrong and the chances were that Frank was right. One circuit was all that was flown that day and a few hours later, whilst fashioning a horn extension from eighteen swg aluminium, my heart did drop down out of my throat to its more normal position (despite the rumours that I haven't actually got a heart).

On the next outing the model behaved impeccably and would climb almost vertically out of sight. a feature that was a little more unusual in those days. The balance must have been perfect as it handled so sweetly. I had marks deducted in a limbo contest once for flying under the tape with the tail skid scraping the tarmac for some distance even though all three wheels were off the ground throughout the pass (the original model was a trike rather than a tail dragger). Of all the models I've flown, whether of my own design or others, I think that the Vertigo has given me the most pleasure on the flying field. Phil Kraft's Kwik Fli III would come a creditable second, but the honours have to go to the beast that I single handeolly tamed by simply following the instructions!

I vividly remember the models untimely end. The Swindon club chairman came up behind me as I was flying to introduce me to the newly arrived RAF C/O of Wroughton aerodrome. While Jimmy was telling the RAF officer about the club and how responsible we were I thought it was time to show this new chap just what a well trimmed Vertigo could do. So the model climbed vertically for about two hundred feet, I then performed a reasonable stall turn, and started vertically downwards. At this precise moment the trusty Skyleader SL decided to 'throw in the towel' and shut down completely. After bending the elevator stick all I could do was enjoy the crash along with everyone else. Bye bye Vertigo, bye bye Merco 61. The RAF officer walked away muttering, 'very impressive,' well I think it was that anyway.

DECISIONS, DECISIONS: So, when I bought a miniature radio at the Sandown show last year I wondered what I could build to put it in. The first, and obvious thought, was a Magnattila at about forty five percent, but I've built three Maggies over the years and I felt like something a little different.

Jack Bishop (no relation to 'the voice') an old friend from the Reading club (I met Jack when I tucked him up, sorry, sold him my first microlight, a Rotec Rally 2B with one hundred and eighty seven pulsating cc's of power, and he still talks to me!) had built a half size Junior 60 for a similar engine and radio. Jack said it flew very well and although it was without ailerons it rolled on rudder extremely well He kindly sent me a copy of his drawing and whilst I'd seen his model, which looked really nifty, I just couldn t get enthusiastic enough to start hacking at the unwilling balsa wood to create one for myself.

It was at that point that I remembered how good my Vertigo had been and immediately phoned my old Club 20 chum Bill Burkinshaw at Nexus to see if the plan was still available. Bill found one and sent it to me. On receipt I spread it out in the study and using a ruler and a protractor for the odd angle, loaded it into my CAD programme the hard way.

Now, the nice thing about CAD is that once you've got the model drawn in at full-size it's very easy to retro scale the design to whatever size you like. Half size came out at twenty seven and a bit inches (690mm) wing span and that was just about what I thought I d be looking for to suit my PAW 55 R/C diesel. So, hit the button and presto, a half size Vertigo.

Some of the wood sizes do not lend themselves to half scale, for instance, the original used 3/32 quite liberally but where on earth are you going to get 3/64? Having said that my little prototype tipped the scales at 11,6 ounces (330 grams) which gives a wing loading of 12.35 ounces per square foot (37.9 grams per decimetre) which was much better than expected at the start of the venture.

I think, at this point, it's fair to warn you that if you build a Minivert you'll have to be prepared to spend time selecting your wood and you'll have to be prepared to work very accurately as any error is magnified as the model gets smaller. Having said all that about the building it's only right and proper to also point out that this is no beginners model from a flying point of view. As a general rule the larger the model, the easier it is to fly. So turn that on it's head and yes, they do get more difficult as they diminish in size. I was horrified at the full-size show at Oshkosh last year to find an American retailer selling ready built models of about twenty eight inches wing span, complete with radio and engine, as first time trainers! 'Yeah, they're real easy to fly fella.' And there on the video behind this charlatan you could see this little model twitching all around the sky. The real aerodynamics expert will talk about Reynolds numbers and the like but a major factor when down-sizing models is wing loading. You have to work very hard on a small model for this to remain within bounds, the I'll just add a bit there to make it stronger approach has to be replaced with how can I add more lightness?"

LET'S GET BUILDING: Well at least you only need a small board, so it shouldn't be too difficult to find a flat one. As it's expected for you to have some experience (otherwise you shouldn't really be tackling this particular project) I don't think it necessary for me to expand much on the instructions given on the plan, although a few tips may be of value to you:

1. I cannot emphasise too much the importance of weight. The necessity to keep things light must be at the forefront when selecting the balsa. Balsa wood varies from three to thirty five pounds per cubic foot. Good model shops will normally have stocks of between six to sixteen pounds per cubic foot. Six pounds is considered light, around eleven or twelve pounds is medium, and sixteen is hard, or heavy. About half an ounce is required at the front end to balance every tenth of an ounce that you add to the tail end. I'm in the lucky position of being able to select balsa from the not inconsiderable stocks held by my old company, Flair Products, but whatever your situation, think light at all times..." 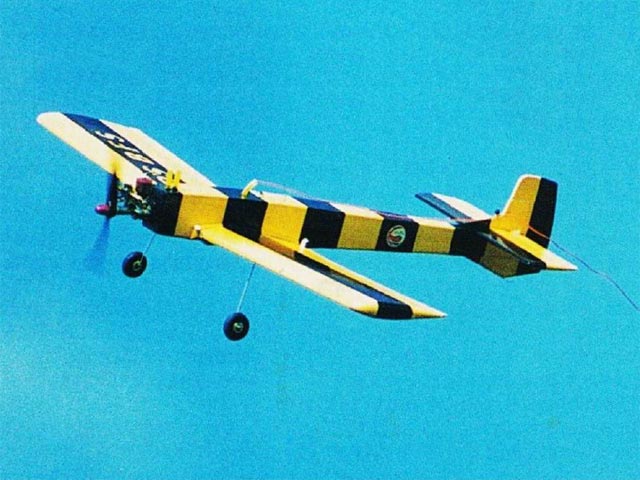