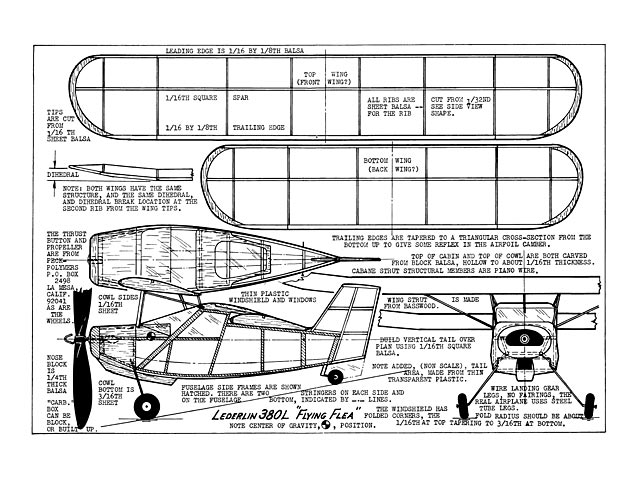 Quote: "The Flying Flea has been a popular and controversial airplane almost from the first flight of Henri Mignet's original Pou Du Ciel. Of course, the accurate translation of 'Pou' into English is 'Louse', which maybe explains things a little. There were lots of versions of the Flying Flea, almost as many as there were builders of this early and some-times disastrous homebuilt airplane.

This version is the Lederlin 380 L 'Flying Flea', and the model was drawn up from a three-view that appeared in the March 1969 issue of Sport Aviation, which is published by the Experimental Aircraft Association, of Hales Corners, Wisconsin. Although the three-view shows a spinner, none of the photos in the article show one, so the model does not have a spinner.

There is a fine article by John W Underwood on Henri Mignet and the Pou Du Ciel in the Premier Issue of Air Trails, which came out in the fall of 1976. In the article, there is a very similar three-view of the Lederlin version and some others, and a considerable number of photographs of various versions, but none, unfortunately, of the Lederlin aircraft.

Whether you see the Flea as a tail-less biplane or a tandem wing monoplane, or a big-tailed parasol, it looks like an interesting Peanut Scale subject. There is a lot of supporting surface and an interesting shape.

The model is built using standard techniques, and most or all the instructions are on the plan. Only one or two things need be mentioned.

First, use lightweight stock as far as possible, to keep the model weight down.

Second, the model's fuselage is short and fat, so that care in selecting flexible balsa for the fuselage structure will help.

Third, the front wing on the real airplane is free to pivot about the wing strut attach points, and is controlled by a control system that penetrates the windshield. The model has the trailing edge of the wing supported by a pin through it and the cabin top.

Fourth, to come nearer to the reflex airfoil section that is used on the full scale airplane, without actually cutting reflexed ribs, the underside of the trail-ing edge is tapered up to give the sharp trailing edge.

Assuming that the reader has been reading these peanut instructions in earlier issues or at least if he hasn't, he'll order some back issues from our illustrious editor, building instructions will be dispensed with and flying suggestions will follow.

Note two items on the plan carefully. The first is the center-of-gravity location. No, it isn't that funny circle under the title. That is only to indicate what symbol shows the balance point on the side view in the drawing! The original model was unstable in pitch until it was ballasted to balance as indicated. It seemed as though a model with a tail this big should be trimmable with a CG further aft than this, but less incidence in the forward surface to cope with a more aft CG resulted in either increasingly steep dives if the model was launched level, or a pitch-up and stall followed by the same kind of dive if it was launched nose up. (Incidentally, the early versions of the real airplane suffered from a somewhat similar malady, and after several permanently spoiled days for their unfortunate pilots, the building of 'Fleas' was banned in England). If your model acts funny in the pitch axis, move the CG forward and increase the incidence of the forward wing.

The model in the photographs also demonstrated a deficiency in directional stability. It wallowed, waggling its tail left and right as it flew. Therefore, a non-scale vertical addition was made to cure the problem. An area of thin transparent plastic (left-over window stock), was added above the tailwheel.

With those two 'adjustments', the model flies nicely in fairly tight left circles. One interesting aspect of this short model is how suddenly it will nose over if the wheels hit an obstacle on landing. Of course, all peanut models will nose over on landing if their wheels hit an obstacle, but this model flips over quickly. Mr Underwood's article shows the 'Appleby' Pou on its back after landing in a cabbage patch, so a 'nose-over' could be judged a scale type landing.

The registration letters for the real Lederlin Flea were, F-PMET with the dash in line with the bottom of the letters. It was on the sides of the fuselage, starting just aft of the aft wing, with one letter on the rudder. It was also on the upper left wing top surface, with the first leg of the M centered on the dihedral break." 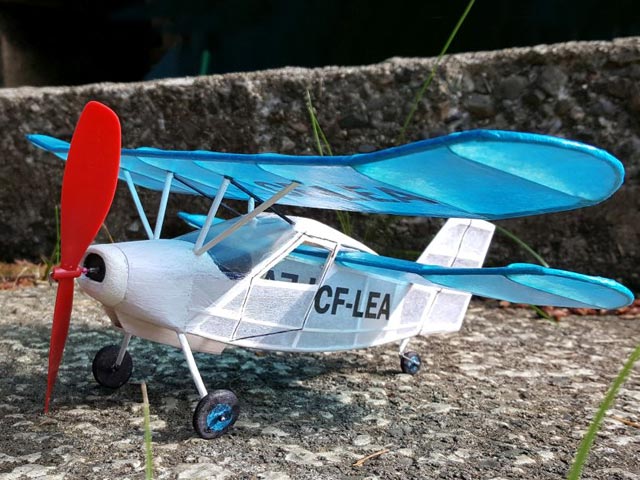