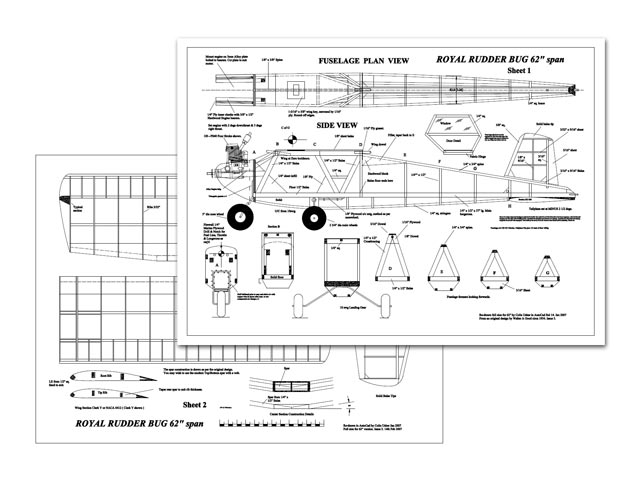 The Royal Rudder-Bug (oz1730) first appeared in Flying Models, Feb 1954. This here is a modern re-drawn version of the design, in vectorPDF format.

Note this plan was previously available as a free download, from the now-defunct Colin Usher website. We found this file in 2020 using the Wayback machine, see datafile link.

Quote: "Royal Rudder Bug Notes. Walter Good's Rudder Bug was one of the more popular radio control designs in the 1950's when valves were all the rage and rudder control was as good as it got. The original version was designed as a 72 in model, but for some reason it was re issued in 1954 as the Royal Rudder Bug with a 62 in span. There is also a much large version, still called the Royal Rudder Bug, but this is simply a scaled up version of the 62 in model.

I built the 62 in version and fitted ailerons. With all that dihedral this was a big mistake. It was, quite literally unflyable, the ailerons introduced adverse yaw and left input gave a right turn. The ailerons were disconnected and the rudder servo plugged into the aileron slot. The model is very sensitive needing only small control throws, 3/8 in either way on both is plenty.

Initially I fitted an OS 40 MAX and this was far too powerful for the 62 in model. I have now fitted an OS 25 FSR and this is gives plenty of power. Model climbs well and will loop with ease. If you do wish to fit ailerons reduce the dihedral to about 1 in max on each tip and use very small throws to start with, also try differential. Very hard to ROG but gets away well with a hand launch.

Incidentally Dr Walter Good was a leading American scientist during World War II and played a major role in developing the 'Radio Proximity Fuse', an artillery shell fitted with a radio sensing device that detonated the shell as it flew past the target. For the full story read 'The Deadly Fuse by Ralph Baldwin'. The Proximity Fuse was considered to be one of the major technological developments of WWII." 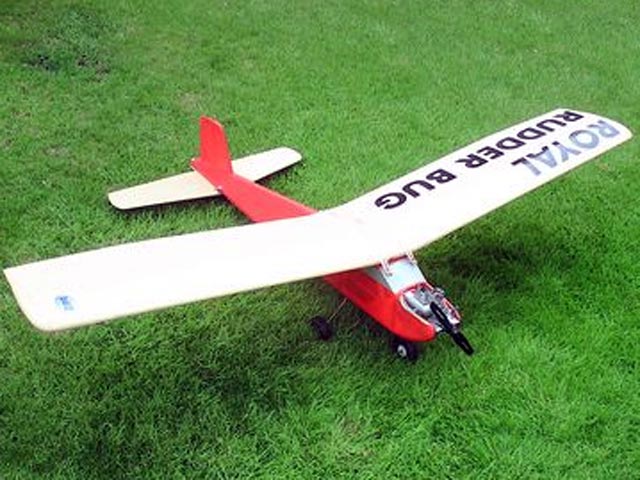