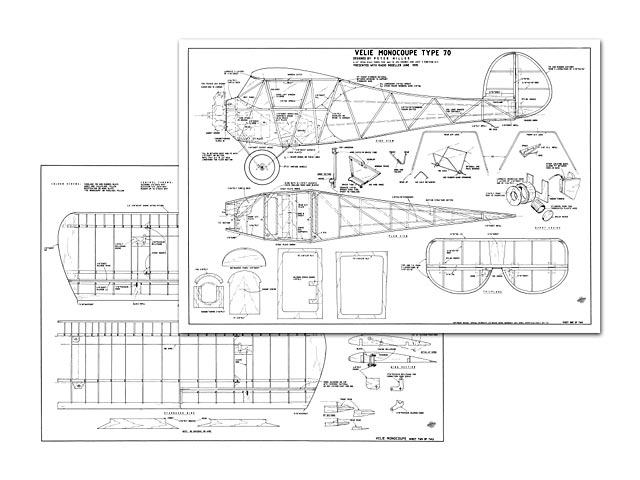 The Monocoupe aircraft are relatively unknown in Britain and yet they were highly successful in the in the USA. They were designed to provide comfortable and reliable transport and yet they won hundreds of races and aerobatic competitions. Let me tell you about them.

In 1916 a 19 year old Iowa farmer's son called Clayton Folkerts (whose name was later associated with those very fast Folkerts Speed King racing aircraft such as 'Jupiter, Pride of Lemont') saw a troupe of barnstormers performing - he became hooked on aviation and began to read everything that he could on the subject.

In the winter of 1918 young Clayton built a crude biplane in his cellar using scrap materials from around the farm which he powered with an old motorcycle engine. The plane fell to bits on the first taxi run and, although he rebuilt it, it never got off the ground! The second Folkerts attempt was also a failure but his third effort did make quite a few flights of around the minute mark. This prototype was also abandoned after trying two engines and rebuilding it a couple of times.

Clayton's fourth aircraft was a success. It was a shoulder-wing aeroplane which featured geodetic construction and it carried Folkerts around for some 50 hours flying time in 1926.

Don Luscombe (later of Luscombe Phantom and Silvaire fame) was a businessman who had learned to fly in the war and wanted to continue in peacetime. He was soon fed up with the draughty cockpits of the day and decided that he wanted an aircraft that he could fly in a suit. Don convinced a group of businessmen of his ideas and they coughed up $5,000 to get a company going. Don now needed a designer and novelty salesman Milt Miller suggested Clayton Folkerts.

Clayton was hired and the first thing that he did was buy some welding gear and teach himself to weld! The aircraft that he designed and built was a funny looking side-by-side two seater high wing cabin plane. This was the original Monocoupe.

Monocoupes were a success - even the great Lindbergh bought one. Anthony Fokker used to put on aerobatic displays in borrowed Monocoupes and it is said that FAA officials would tactfully turn their backs as it was well known that Fokker had never bothered to take out an American pilot's licence. Two Monocoupes flew in the 6,300 mile Ford Reliability Tour and both finished. And then they started racing Monocoupes. The tubby little plane was averaging 95 to 101 mph, on its 60 hp engine. 370 of the Type 113 Monocoupe were sold and, in 1928, 10% of all aircraft registered in the USA were Velie Monocoupes.

Monocoupes gained further national publicity when one took off by itself, circled the field until the fuel ran out and then landed close to where it had started from without any damage! Ripley's 'Believe it or Not' feature gave that event world wide exposure! The little aircraft was quite a performer. At the 1929 National Air Races it featured strongly, winning some races against serious opposition such as the Chevrolaire-powered Travel Air racer.

Directly developed from the Velie Monocoupe came the 90, 110, 90a and sensational 110 Clip Wing Special which had a top speed of over 200 mph and a stalling speed of 75 mph. Monocoupe enthusiasts and those building this model will find a wealth of information in the book 'Visions of Luscombe' which includes three-views and colour information on Monocoupes and the Luscombe designs.

The model: Monocoupes are my favourite aircraft. I had just finished my version of Livingston's 110 racer (see RM June '94) and felt that I would like something a little more docile. I wasn't quite ready to design the 90a which I feel is the definitive Monocoupe and so I drew up the Velie Monocoupe. There is a rubber powered kit available for this version and some three-views. The drawings in the kit are not accurate, they feature dihedral because it is a free flight model and the tailplane is not correct. The three-views are, to be polite, suspect as the undercarriage is completely ridiculous. I worked from the three-views and photos in the book 'Monocoupes and Men' which look very accurate, plus a set of photos from Scale Plans and Photo Service in the USA.

This model is as easy as a vintage model to build and should be capable of adapting to Texaco Scale very easily, indeed the drawings were prepared with that in mind but I wanted more control and a throttle. Later in this article I have suggested the alterations to make this a true Texaco Scale model.

Fuselage: The fuselage is built in the normal way with two sides constructed over the plan. The longerons are spruce but all diagonals and cross braces are balsa. Use PVA for these joints.

Glue the sides to the 1/64 ply doublers and leave to dry while cutting out the formers. All longerons are cut through as far as the ply just in front of F-2 and behind F-3 locations. At this stage you can chamfer the tail posts slightly. Glue the sections of trailing edge stock onto the front of the fuselage. These form a firm location for F1. If you have a good building jig it will help with assembly but it isn't essential. With sides held over the plan, upside down, assemble to the two formers making sure that everything is square.

Cut the rear cross braces and then clamp (but do not glue the rear of the sides) and fit the cross members. You will need elastic bands to hold the sides in. You can use CA glue here. Once the cross members are in, glue the tailposts together. Pull the sides in at the front and glue F1 in place. I used epoxy for this joint. It is easier to fit the engine mount at this stage - if blind nuts are used it can be removed until you are ready to fit it finally.

The undercarriage can be bent from one piece of 12 swg wire although the plan shows it bent from two. Bind to the two undercarriage plates with copper wire - thicker wire is best, about the gauge of 30 Amp fuse wire - and glue the plate in place. At the same time glue in the small pieces of ply which take the strut mounting screws. Fill in the bottom of the fuselage back to F-3 with 1/8 sheet.

Fit the ply gussets which will take the blind nuts for wing mounting. Add the stringers and snake outers and the ply tail skid mount. Plan the location of the tank and drill F-I for the pipes and then fit F-1A right at the nose and the instrument panel. This will have to be cut away for the tank unless the Texaco version is built. Now add the 1/64th ply turtle decking at the nose. Other jobs that can be done at this stage are making the window frame for the left window as this opens for charging and for connecting the aileron controls. The laminated sheet that takes the top of the wipdscreen can't be made until the wing is complete.

The wing: The wing is very easy to build. The top hinged ailerons are built at the same time and cut away at the trailing edge and tip later. The aileron controls are quite conventional except that there is an extra bellcrank, and the servo is in the fuselage..." 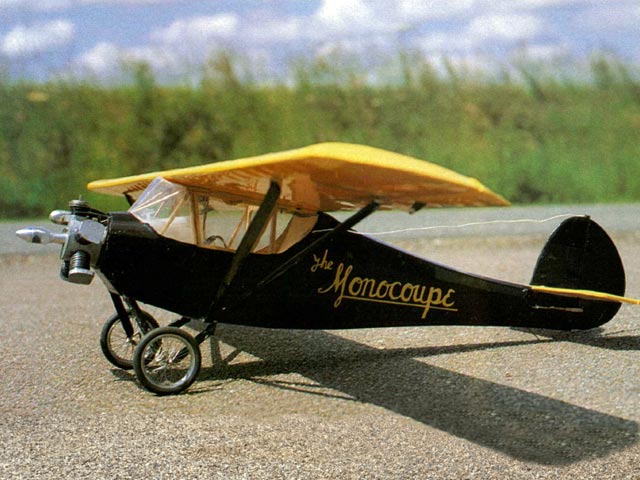