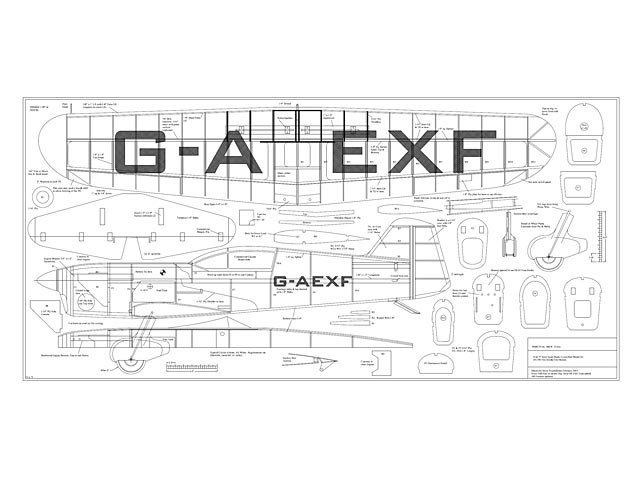 Note this plan was previously available as a free download, from the now-defunct Colin Usher website. We found this file in 2020 using the Wayback machine, see datafile link.

Quote: "The prototype Mew Gull first flew in March 1934 and was not a particularly attractive aircraft. The second Mew Gull to appear was an altogether different aircraft, many would argue that it was one of the most beautiful aircraft ever built. It was designed as a racer from the start, intended to compete in the popular Air Races of the inter war period, (1918-1939) in particular the Kings Cup Air Race.

5 Mew Gulls were built to the new design and the initial prototype was converted to the later design giving 6 in total. It was frequently flown by its designer Captain Edgar Percival, the last example remaining airworthy until the 1990's. One has recently been restored to flying condition. When fitted with a 235hp de Havilland Gipsy Six R Series air cooled inline engine and the latest Ratier variable pitch propeller it was capable of nearly 250 mph.

The design presented here is a 'stand off' scale model of Alex Henshaw's modified G-AEXF which completed a record breaking England to Cape Town return flight in 1939. More details and a full colour scheme can be seen in The World's Greatest Aircraft pg.301. Chant - Taylor ISBN 1-85605-523-X Alex Henshaw has also written a book, The Flight of the Mew Gull. Crowood Press.

The model is of straightforward construction. cowl & canopy from MyHobby Store will fit. Make sure your fuel tank will fit. I installed an OS 90 TS. Covered in white Oracover/Profilm ready to fly less fuel and with no wheel pants, it weighed in a 6 lb 11 ozs."

Update 18/10/2020: Replaced this plan with a rescaled version, now at correct fullsize with wingspan at 61-1/2 inches, thanks to Gene.