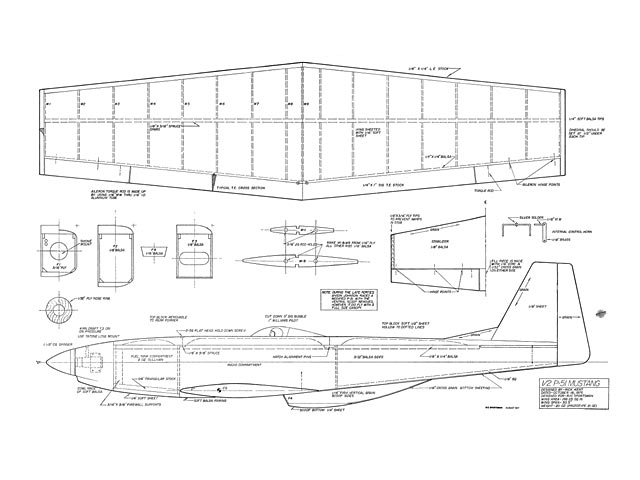 Quote: "Having been involved in drag racing for the past 10 years, it was only natural that I got involved with racing model airplanes after learning to fly radio control.

After flying in a 1/2A race recently, I became hooked on these little bombs. However, being basically a scale builder, I decided that 1/2A racing could use the color and excitement of scale type planes. This was when I drew up the preliminary drawings for 'Miss Foxy Lady.'

CONSTRUCTION: It is best to start construction with the wing as it will be needed for alignment of the wing saddle and the empennage shortly after fuselage construction begins.

Make a root and a tip rib template (two each) out of 1/16 plywood and drill 3/16 in alignment holes for the jig rods. Now cut 1/16 balsa rib blanks to length so that you have a balsa blank for each rib template. Align templates and rib blanks into position above the plan and glue on the leading and trailing edge pieces.

You should now have a wing assembly made of shaped root and tip ribs and un-shaped balsa intermediate ribs.

To bring wing to proper contour, make a sanding board about 18 in long and an inch wide (I use the edge of a small carpenter's level with sandpaper cemented to it.) Sand the balsa blanks with the board all the way from root to tip until rib contours match properly chord-wise and from tip to root. When the top half of the ribs are completed, sand in the spar notches and install a 1/8 by 3/16 spruce spar. Turn the wing and the. jig over and repeat the process on the bottom of the wing. Repeat this process for the opposite wing panel.

With both sides of the wing ready, join with 1/2 in. dihedral under each tip. To join the two panels together, place a 1/16 in. balsa rib between the two panels and glue to one panel. Now, sand this rib at an angle until the proper amount of dihedral is obtained. Next, glue both panels together. A strip of light glass cloth should be placed around the center joint to keep the wing from folding up during the high G turns experienced on a two pylon course used in 1/2A pylon racing. On my plane the glass was bonded to the wing with Zap or Jet instead of epoxy.

TAIL SURFACES: Both the vertical and the horizontal surfaces are made from firm, but light 1/8 in. balsa. The vertical fin and the rudder are cut out in three sections and glued to-gether, then sanded to shape. They can now be laid aside until needed. The stabilizer is similar to the fin, except that the elevators need to be hinged. The center piece of the stabilizer is laminated from one piece of 1/16 in and two 1/ 32 in pieces of balsa. Next, bend the elevator joiner and silver solder on the elevator hot n. When the horn is cool it can be installed in the stabilizer filler and then the filler glued to the stabilizer. This assembly should now be ready for installation in the fuselage.

FUSELAGE: Begin by cutting out two identical fuselage sides from firm, but reasonably light 3/32 balsa. Mark the locations of the bulkheads and the firewall. Glue the upper longerons in place. Next, mark a center-line on the 1/2 by 2 in balsa top block. Cut the top block almost through at the back of the hatch so that it can be easily cut through once the top block is shaped. This will make the radio hatch.

Tack glue the firewall and F-2 to the top block and permanently glue F-3 in place. When the bulkheads are dry, glue the fuselage sides to the formers and the top block behind F-3. Be sure the sides come together on the centerline of the top block.

Next, the 1/4 in triangle stock and the 1/4 in tank compartment floor is installed. While this is drying, cut out the slot between the top and the fuselage sides for the stabilizer, and it can be installed - being careful to align it properly.

The elevator pushrod should be made now and installed on the control horn. Be positive that this is strong because it can't be reached when finished..." 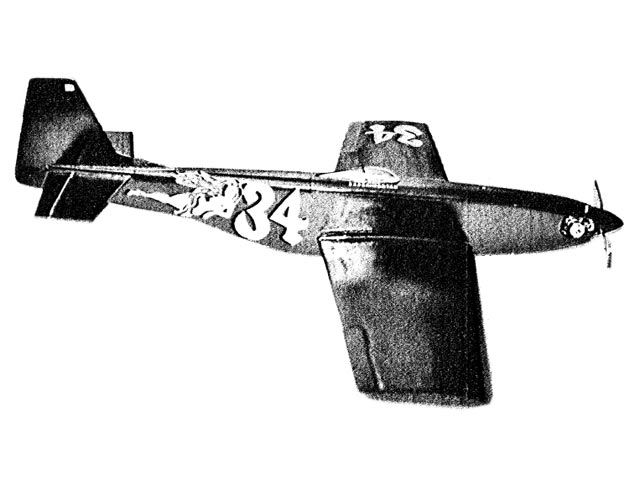