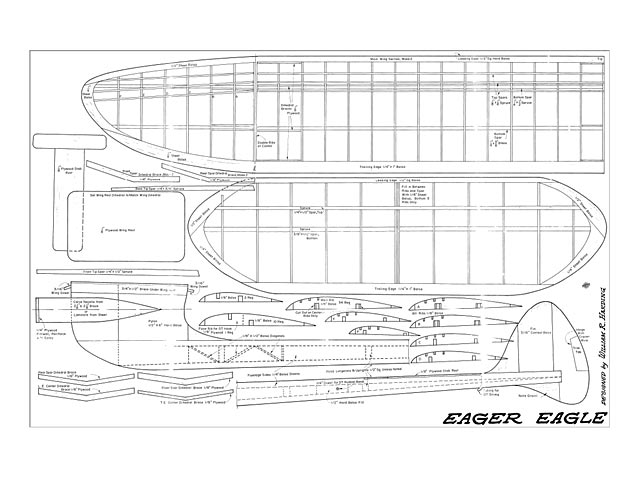 Quote: "Shake the cobwebs off your .40, it's got work to do. Eager Eagle, by William Harding.

At the sudden roar behind me, I nearly dropped the 1/2A I was cranking. Anxious to locate this nut with the lawnmower before he chewed up my models and me with them, I turned quickly in the direction of the sound. Following the gaze of the crowd, I saw not a lawnmower, but a football huddle of modelers near the center of the field. Then suddenly, out of the huddle, a giant yellow free-flight jumped skyward.

The big engine screamed like a banshee. Its canoe paddle prop chewed up and spit out huge chunks of the summer sky as it clawed its way to a tre-mendous altitude on sheer power. Awestruck by what I'd seen, the picture of the big ship repeated itself in my mind as I journeyed home from the contest.

The big yellow free-flight still haunt-ed my daydreams when Kenny Rohm dropped by later that year.

How about designing me a free-flight, he blurted out as though I could sit down and draw one up for the weekend. I would have laughed at anyone else but Ken is a real competitor in the free-flight field. Having a ship in his hands is a tough test of its ability to produce trophies. I was weakening and Ken's next statement clinched it. I want a big ship, he said. One for a .35 or .40.

That did it! Visions of the big free-flight exploded in my brain. Rushing Ken out of the house, I almost broke my neck getting down the basement steps and to my drawing board.

It would be nice to say that 'Eager Eagle' came to me in a flash of inspi-ration, and that after a sleepless, coffee filled night, I emerged sleepy eyed but victorious from my basement dun-geon carrying a roll of completed draw-ings under my arm. Oh I had a sleepless coffee filled night. Then I had another and another until about a month later the first Eager Eagle took shape.

The time spent in design paid off for the present Eagle is very much like the first. About the only changes needed were certain places that we felt needed beefing up a bit. Ken and I have learned the hard way that a contest ship, no matter how good a per-former, can prove worthless unless it can stand up to a rigorous contest schedule. Eager Eagle is not only a high climbing floater, it is a rugged workhorse capable of taking hard knocks and still being there for the fly-off.

Although not intended as a beginners ship, construction is straight for-ward and fairly standard. Anyone who has built a couple of free-flight kits should be able to struggle through this design, so let's grab a truckload of balsa and get to work. The wing is a good place to start..." 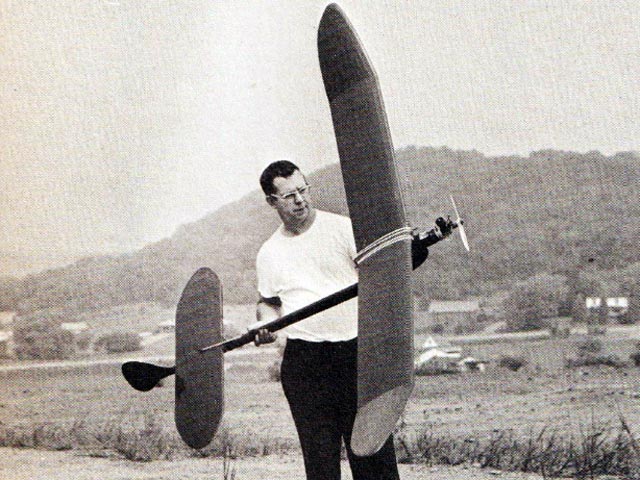