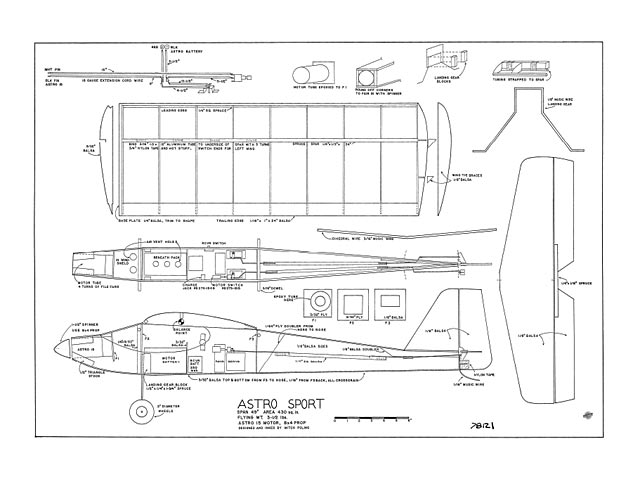 Quote: "The Astro Sport is an ideal plane for the Sunday flier who has to deal with windy days and a lot of air traffic at the local field. It has the speed to keep up with the big guys, and the stability and penetration to handle quite heavy winds. It uses the Astro 15 (equal to a sport glow .15) which has all the power needed for sport stunting, and is smooth running and reliable. A measure of the success of the Astro Sport are the comments of my fellow fliers that they didn't know an electric could fly like the Sport does; most had assumed all electrics, were powered gliders! Another plus is it is simple in design and fast to build for flying the next weekend, so let's go!

WING CONSTRUCTION: The ribs are all the same, I stack them and cut them out with a Dremel motor saw; however, the traditional razor blade works just as well. I try to pick light balsa for all parts of the plane. My guideline is 1/2 oz for a 1/16 x 3 x 36-in sheet, 3/4 oz for a 3/32-in sheet, and 1 oz for a 1/8-in sheet. If you pick out balsa of this weight, the plane should come out light. The trailing edges are cut from a 1/16-in sheet, the leading edges and spars are spruce. Do not use balsa for these, the wing will not be strong enough.

Build the right and left panels using Titebond aliphatic glue. Hot Stuff on the end plates and the wing tips (at a 45° angle). Install the aluminum spar tube, using it as its own drill. Notch one end of the tube, then bore through the ribs by hand with the tube. Hold a block behind each rib as you bore through so the rib won't break. Bind the tube to the spar with 3/4-in nylon tape and Hot Stuff. Use three turns of tape in each rib bay.

Cover the wing with Solarfilm and make the dihedral wire. Slip the wings on the wire, and tape around the center seam with vinyl tape. Don't worry about gaps at the center, the tape covers them nicely. Put 1/4-in washout in at each tip...

EMPENNAGE
The rudder and stabilizer are cut from a 1/8-in sheet. I make Solarfilm hinges by beveling the hinging edges to 45°, then covering the stabilizer and elevator in one piece, and likewise with the fin and rudder. The areas where the fin glues to the stabilizer and the stabilizer to the fuselage are then stripped of film so that epoxy will hold firmly.

FUSELAGE: The sides are cut from 1/8-in balsa. Cut the doublers from 1/64-in plywood (used for covering foam wings) with scissors, then lay lines of Hot Stuff on it. Press the doubler and fuselage side together, then trim around the edges with scissors. Hot Stuff in F2 and F3 and the 3/32-in braces for F2, then cover the fuselage bottom from F'2 to F3 with 3/32-in. balsa. Trim the bottom, then glue the fuselage ends together. Check the trueness of the fuselage by laying it on its side on the table. Measure the vertical distance from the table top to the fuselage end, then turn the fuselage over and repeat. The distance should be the same.

Plank the fuselage top and bottom from F3 to the end with 1/16-in balsa. Hot Stuff in the 1/8-in tail doublers and the 1/2-in triangular nose pieces. Cut the motor tube from file card, wrap it around the motor and use five-minute epoxy to glue it, being care-ful not to glue it to the motor. Epoxy the tube to F1, then epoxy F1 in place.

Plank the top and bottom from F2 to the nose with 3/32-in. balsa, and round off the nose to fair in with the motor tube. Cover the fuselage with Solarfilm, then install the wing dowels, cut the air vent holes and the slot in the bottom for the landing gear. Epoxy in the landing gear blocks and the empennage.

The landing gear is removable, just slip it in. Wrap tape around the wire if it is neces-sary for a tighter fit. Install the radio equipment and the Astro 15 unit, using the layout and diagram on the plans. Hot Stuff in the 3/32-in balsa partition to hold the battery pack in place. Hot Stuff the switch on a 3/32-in balsa plate, then Hot Stuff the plate to the cabin side so the switch button just touches the servo arm..." 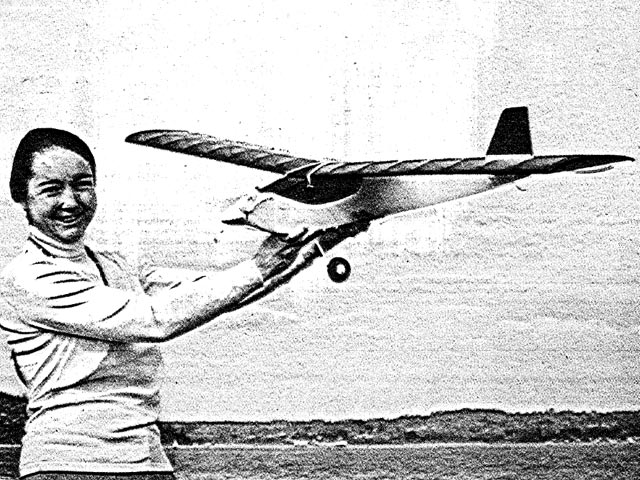