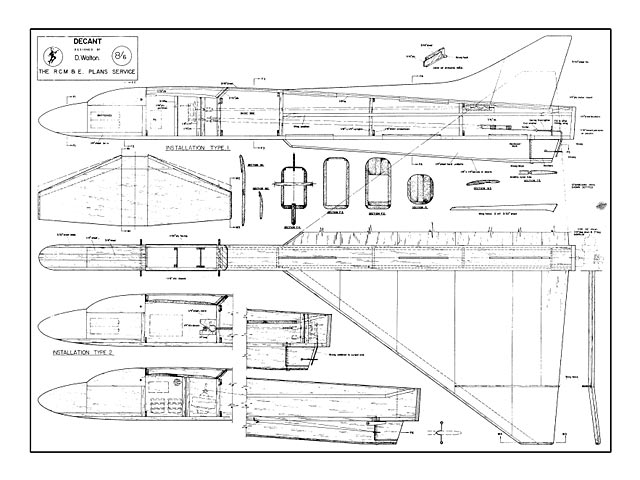 Quote: "Tired of the same old model shapes? Try this one for a difference in looks and performance. Decant, by D Walton.

Decant is the fifth in a series of delta canards developed from a free flight B-70 Valkyrie (oz4257). Delta canards have several advantages over ordinary deltas in stability. In particular, the stall is very gentle as each wing is carrying a proportion of the weight and when the foreplane is made to stall first only a part of the lift is lost. On Decant, 'wash in' is added to the fore plane to allow the stall to occur progressively inwards from the wing tips. The CG may be adjusted to vary the glide from a fast flat glide to the equivalent of a flaps down landing. Inevitably, the delta canard is slower in flight than a delta of the same area and power due to the extra drag.

No effort has been made to make Decant into a guided missile, the emphasis is on ease of flying and safety. To many people's eyes it must be grossly underpowered. OK, fit a 1.5 cc, but don't blame the designer. When the first radio version was produced it was found to be too stable and was difficult to manoeuvre, so the tips of the rnainplane were anhcdralled and the dihedral of the fore plane was reduced to that shown on the plan. It was also found that in certain attitudes the wing blanketed the rudder causing a partial loss of control.

The obvious answer to this was to fit the rudder below the wing. This meant that when the rudder was faired in with a ventral fin the size of the fin could be reduced.

Although, as stated, it is not a guided missile, Decant still draws a crowd whenever flown because of its realistic appearance and long flat glide. In fact, the originals have been used as slope soarers for a change of pace. The prototypes have weighed between 20 and 24 ounces.

Radio Installations: The fuselage has been made rather slim for aesthetic reasons and this brings its own problems in radio installations. Three types of installation are illustrated to suit most types of equipment. The choice, as always, is up to the builder. All have been used with equal success, although manual pulse is more suitable for the hairy chested flier.

Type 1. The more traditional installation is for all miniature 3 v. receivers such as the Futuba, Kraft, etc.

Type 2. This installation is more suitable for the larger receivers such as the Terrytone but may be used with 3 V receivers using a 3.6 V DEAC and fairly heavy wiring to minimise voltage drop to the escapement It is the simplest of all the installations but the model will need ballast to obtain the correct CG.

Type 3. Manual pulse, the simplest of the proportional rudder systems is for the brave ones but may be used to advantage by setting the stop on the no-signal side to give the tightest turn possible without the nose dropping, allowing one to rest their thumb between manoeuvres. No claim for originality is made for this system, all details may be found in the July 1967 issue of RCM&E.

Initially, this installation gave quite a lot of trouble due to interference on the sensitive Futaba receiver and could only be cured by introducing a relay with suppression across the contacts, suppressing the motor and wrapping it in cooking foil which was then connected to the battery negative.

Wing: It is essential to choose wood of the lightest grade that is not 'spongy', otherwise the weight will creep up too much. Cut each piece roughly to shape allowing about 1/4 in oversize for final trimming. Mark the centre line on each piece using a carpenter's square. Butt joint together, ensuring that the centre lines coincide and weight to prevent warping. Be careful that excess cement does not stick the assembly to the building board. When dry, cut to final shape and add the hardwood wing tips. Lightly sand both sides to remove all ridges and globs of cement. Add hard L/E stock, ensuring the feathered edge is to the rear. When dry, sand to section.

Carefully saw almost through the wing on the under-side and prop up the tips 1/2 in and cement well, forming a cement skin over the break. Weight well to prevent the cement skin pulling up the tip.

Foreplane: Use the method of construction outlined for the wing. The LE stock should be cemented in position as shown so when cut to shape it will taper in thickness to give the wash-in. Saw almost through at the centre and prop up the tip 1 in.

Fin and Dorsal: Cut the two pieces to shape taking note of the direction of the grain. Remember to leave the tongues. Butt join together, weighing as necessary to prevent warping When dry, lightly sand all over and round off all edges.

Ventral Fin: Cut from hard sheet remembering the tongues. Butt join the hardwood leading edges and skid as shown. When dry, sand all over and round off edges as shown.

Rudder: Cut to shape, allowing a gap top and bottom to allow free movement. File a groove in the front to accept the nylon tube hinge. This can be cut from a scrap of Micro-Mold flexible push rod outer or use a biro refill or similar. Araldite tube in position. When hard, sand assembly to a streamlined shape.

Fuselage: As already discussed, the control system will have been decided upon and the alterations made to suit. No complete formers are used except the engine bulk-head. The spacers are cut to width from a sheet of 1/8 in
balsa and stripped to height as required.

Take care to select two identical pieces of wood for the sides. Trace out one side, not forgetting to mark the up-right positions and wing slots. Rough cut the profile but do not cut the wing slots yet. Using minute dabs of cement around the perimeter, stick the rough cut side to the other piece of wood carefully aligning the bottom edges. Rough cut as necessary and sand to final profile. Cut wing slot and removable hatch accurately, but not completely, as there is a tendency for the sides to spring open, making accurate assembly difficult. Add longerons and uprights to one side. When dry, for quickness push a pin through the sides at the top and bottom of each upright just touching it and use these as the guides when adding the uprights to the other side. Separate the sides. Laminate nose and cabin blocks, rough cut to shape and cement to one side. Cement other side to nose block ensuring bottom edges are level. Add all spacers. Cement sides to sheet bottom, ensuring they are straight. Sheet the top, taking note of the grain direction. When dry, cut slots for the ventral fin and fin. Add hardwood block for rudder hinge. Sand all corners as shown and round of nose and cabin blocks.

Cut wing slots completely and cut free the hatch. Add wing dowels, remaining spacers around the hatch and the 1/32 ply stiffeners. Temporarily strap leading plane in position and trim hatch to fit. Cement in position and add 1/32 ply facings. Add fin, ventral fin. Carefully drill a hole to be a tight fit on 1/16 piano wire through the ventral fin skid into the hardwood block. Add wing, 1/4 in hard balsa doublers and fill the remaining slots and add the engine bulkhead. Cut free the elevons and cement to the correct angle. Run a fillet of cement around all the joins.

Finish: Some builders will prefer to cover in tissue, but as the author is lazy, the benefits do not seem to justify the extra work. The only place to need any additional protection is the lower nose. This may be done by cementing a piece of nylon in place or fibre-glassing.

The prototype was finished with one coat of sanding sealer and three thin coats of white Ethylrate dope. The cabin is painted with silver Humbrol. The trim is orange dayglo. Fuel-proof as necessary.

Flying: To trim for a glide when using manual pulse, push in a pin to hold the rudder straight and trim in the normal way.

The flying speed is fairly fast so a reasonably hard launch is necessary. A stall on this model is a little unusual and is indicated only by a 'mushy' flight and a nose-up attitude, not by the usual nose-up and dive. All adjust-ments must be made only by moving the batteries or adding ballast. Under no circumstances should the leading plane have packing added, as this will upset the longitudinal stability. When satisfied that the model has a fast, flat glide, remove the pin, if used, and commence power flights on about power. Any 'mushiness' under power is corrected with downthrust, ie by pointing the propeller towards the ground. " 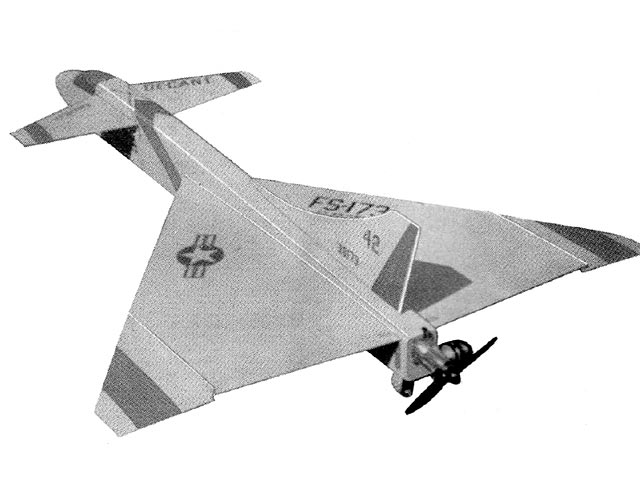 2 Items: 1. Plan is missing Starting CG location. 2. Plan does not call out balsa thickness, although this could be determined from the full size plan.
Ben Musolf - 08/12/2020
Add a comment