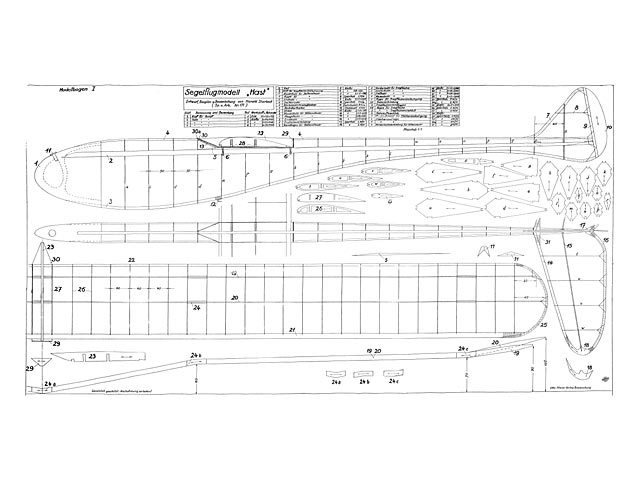 Quote: "Hello and good Morning Mary and Steve, I send you 3 scans for the missing Part 2 from the vintage Hast glider 1934 (oz 12056) model plan. This is the alternative and invisible wing attachment for the vintage Hast glider. Have a very nice Easter Monday and take care Kind regards and best Wishes from Berlin Germany,"

Quote: "The 'Hast', a kit from Aeroplan based on a soaring model designed in the 1930s. Kit Review by Rainer Eckert.

Back to the Roots: Soaring model competitions are nothing new at all - already 70 years ago they were held in Germany (and other countries, too) on a regular basis aimed to promote model-ling techniques and to increase the youth's interest in aviation. However, as there was no technology available to precisely control flight paths, lifetimes of sailplane models often happened to be quite short. Frankly speaking, a lot of models only lived a couple of minutes as they either crashed on their maiden flight or simply were flying out of sight and never returned.

The original 'Hast' - named after the first two letters of the name of his designer Harald Storbeck - almost shared the same kind of fate. In 1935 the Hast took 3rd place during the annual German model soaring competition on the Wasserkuppe (a mountain range north-east of Frankfurt, still famous for both full-size soarers and RC-models) after having reached 8 minutes of free flight at the slope! Later the same year near Berlin the Hast managed to perform several thermal flights of more than 25 minutes until on its last flight the model was finally caught by a mighty thermal and was lost..

Ok, the Hast was gone - but there still was the plan! It was published by Otto Maier in Ravensburg, Germany and available until the late 1950s. Lots of modellers all over Europe have built this model and enjoyed its remarkable flying characteristics. In 1986, the late Dr Volkmar Troebs, who was known to be a real vintage model aficionado, had the idea to convert the Hast into a radio-controlled soaring model designed for thermal flight and slope soaring (at minimum wind!). The modifications comprised: Two wing halves (instead of a one-piece wing) with 10% more wingspan and a 10% larger wing chord resulting in 20% more wing area, the use of a more efficient airfoil (Goettingen 500), elliptic wing tips with aerodynamic wash-out, a full flying stabiliser operated by a bellcrank plus a fin/rudder section with almost twice the size of the original Hast.

The latter modification indeed was in fact the most decisive one converting the model into a controllable RC-soarer. In the old days free flight soaring models were designed to fly stable into one direction, which the original Hast with its large fuselage area and its small fin and rudder did quite well. Despite all these modifications Dr Troebs managed to preserve the elegant shape of this beautiful soaring model - the bird still looks antique! Since last year now Aeroplan, a German manufacturer, is offer-ing a kit of Dr Troebs' version of the `Hast' and this kit is the subject of my contribution this month.

CNC-milled Plywood instead of punched Balsa: It is a bit difficult to write about the attraction which vintage soaring models are holding for today's RC-pilots. For all those who love to build wooden soarers instead of high-tech fibreglass ships, the early days' sailplane models keep many treasures. You will learn a lot about old building techniques and enjoy these models once they are airborne with the sun shining through wing and fuselage revealing their real beauty. Golden moments like these will also make you forget all those long hours you needed to spend in your workshop before.

So much for philosophy - now let's get back to the kit. Aeroplan have a nice range of vintage kits featuring both soarers and powered models. QFI readers interested should visit Aeroplan's homepage at www.aeroplan-modelle.de and have a look. All Aeroplan kits are coming with CNC-milled ribs and formers. This not only saves a lot of building time but also guarantees excellent flying characteristics due to exact airfoils as the wing ribs do not need any sanding! Also part of the kits are plywood spars, stringers, longerons, scale 1:1 building plans and informative sets of instructions, which guide you through all the different stages of assembly.

The first moment I saw the Hast pictured in the Aeroplan catalogue, I knew I had to have this kit. So to me it was a special kind of Christmas present when I received the kit for review in December 2000. I couldn't wait to open the box and when I did I was really amazed about its content. Honestly folks, I have built quite a lot of wooden models, but I never had a kit with wooden parts of such excellent quality. All the different CNC-milled plywood ribs and formers, which are packed separately according to the different sections of the structure, as well as all of the pine wood sticks and the sheets of 0.4 mm birch wood (needed for planking the wings) were immaculate; ie a constant thickness, not any knotholes and a perfect even grain! Later I had some phone calls with Aeroplan and found out the reason for this high quality: They are using 'A ' wooden material, which is also employed for building full-size planes!

Before you start building, you'll have to build: As the Hast was my first vintage model I had to do some rethinking: There was no need of a large level building board as with all my other models. Instead I needed to make a special cradle to assemble the fuselage and a very strange looking building board in order to build the two halves of the gull-wing in one piece. At first I was kind of reluctant to do so - but today I am quite glad to have spent four extra hours to design and build these fixtures. Without them it would have been impossible to build a straight fuselage and a lot more difficult to produce two identical wing halves free of warps..." 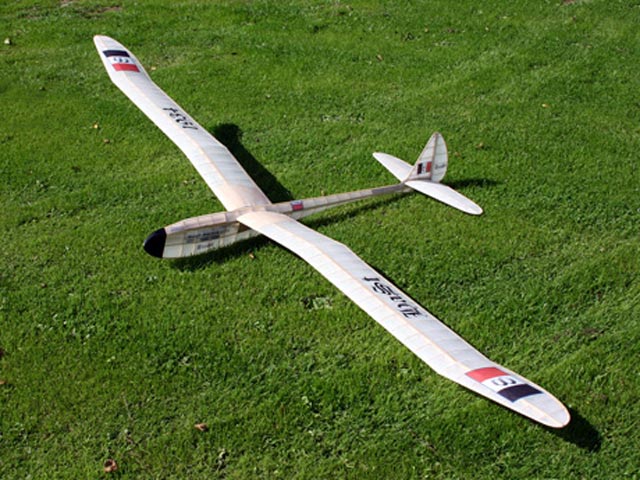 Doh. Added missing instructions file, now.
SteveWMD - 03/04/2020
This is an interesting glider and I have been following it since it first appeared on Outerzone. Thanks to those who supplied the plans and additional information! Google translate tells me the Hast means Have in English, so not the most inspiring name, but I think I might build it anyway! It looks complicated but it's actually a pretty easy build.
Simon Blake - 14/04/2020
Hi Outerzone Fans,
Hast are the two Initial Letters from the Designer of this Vintage Glider Harald Storbeck.
Kind regards,
Axel_VPF - 14/04/2020
Hello and guten Tag Mary and Steve,
the Scanned Pages 30 + 31 from the (4 Pages Article)
FMT 6/88 Magazine are missing.
Kind regards and best Wishes from Berlin Germany
Axel_VPF
Axel_VPF - 20/04/2020
Doh. My mistake. I have added the missing pages now. Many thanks :)
SteveWMD - 20/04/2020
Add a comment