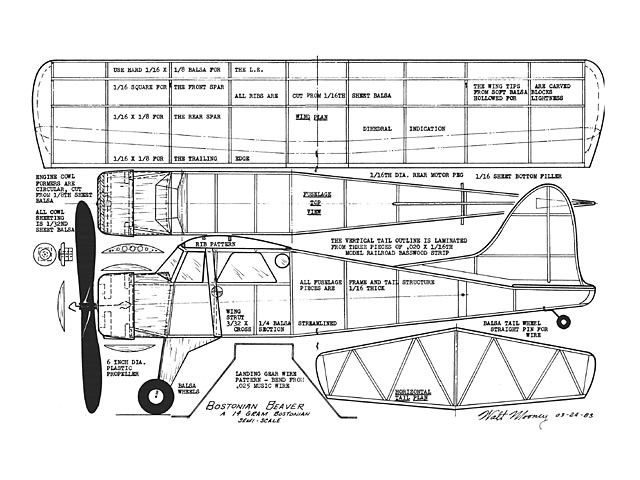 Quote: "Bostonian Beaver, by Walt Mooney. Although this little Bostonian is not a true scale model, it can be built as such with stretched wings if you prefer, but it will no longer be a Bostonian, so you can take your pick - or build both, they're cheap!

Here is a relatively simple little model that will fly well and has some of the flavor of the deHavilland Beaver. As a Bostonian, its wingspan is limited to 16 inches. It was originally built with that class in mind, and had neither wing struts nor landing gear fairing sheets. When it was completed, it looked like a racing version of the Beaver, so a second wing was built. The second wing was built with a span which would be scale for a fuselage of this length. Now the model looked more like a Beaver, so struts and wire fairing sheets were added to fill out the impression.

Take your choice, and build either one. If you choose the long wing version, you'll have to draw up a 24-inch wing. This may be a little challenging if you have never done it before, but it's not hard. Simply get a long enough piece of paper, and make three parallel lines 12 inches apart. Copy the tips from the plan at each outer line. The two root ribs will remain in the same position relative to the centerline. Draw the spars, and the leading and trailing edges from tip to tip. Draw in rib locations equally spaced between the root and tips. You'll need 16 ribs instead of 10.

The wings, vertical tail, horizontal tail, and fuselage side frames are made directly on top of the plans. You'll need two fuselage side frames. I suggest building them on a flat building surface directly on top of each other so they will turn out as nearly identical as you can make them. When the side frames are completely assembled and the cement is dry, they can be removed from the plans. Both sides will most likely be cemented together by excess cement at the joints. Use a thin, double-edged razor blade (half a blade is enough), and carefully slit the two frames apart. A single-edged blade has a thick rear edge that will pry the sides far enough apart to break them during the separation opera-tion; a single-edged blade is thinner. and won't cause this kind of problem.

Once the fuselage side frames are separated, you can begin the fuselage 'box' assembly by cementing the side frames together at the very rear end. It is imperative that the two frames be exactly matched at the rear end for perfect alignment. Next, add the cross braces as you work forward from station to station. Note that there is a sharp angle in the longerons at the wing trailing edge in the top view. Carefully crack the longerons at this point before adding this cross brace pair. There is a similar break at the landing gear/instrument panel station that must be dealt with in the same fashion.

Try to get the fuselage as true and square as possible. The cross-braces at each station should form perfect rectangles, not skewed parallelograms. Viewed from the side, both side frames should be lined up with one another, Viewed from the top, the longerons breaks and frame cross-braces should be in the same imaginary planes, centered on and perpendicular to the centerline of the fuselage. It is difficult to true up a fuselage box frame after it is completely assembled, so you must check your progress at the addition of each set of cross-braces to make sure the structure you are assembling matches the plans.

When you are satisfied with the fuselage frame assembly, add the formers at the forward station, and add the former at the instrument panel location. Cover the front of the fuselage with 1/32 sheet balsa. The nose cowl and the removable thrust button should be constructed next. The cowl formers are all circular. Sizes are shown in the side and top views. The thrust button is made of several layers of hard balsa, and a plastic thrust bearing is installed at its center. Note that the cowling former in which the thrust button fits has a square hole in it to accommodate the button. The thrust button should be a snug fit in the nose cowl former. The cowl formers are wrapped with 1/32 sheet balsa to complete the cowl.

Cut the wing ribs out of 1/16 sheet balsa. It is probably best to cut one rib pattern out of harder material, and then use this pattern to guide your blade while cutting out all these ribs as identically as possible. Pin the leading edge to the plan, and using the ribs as a guide, pin the trailing edge down over the plan at exactly the right distance behind the leading edge. Now, cement all the ribs in place. Cement the spars in place in the rib notches..."

Note see Electric Beaver (oz4276) for a later 3x enlarged version of this plan, for RC and electric power.

Update 03/04/2020: Added colour photos, thanks to David Terrel and David Scigs, of the original model as built by Walt Mooney.

Quote: "I am currently building a Bostonian Beaver. I mentioned the project on the Facebook 'Stick and tissue' group. I received the following photos and information from David Scigs, who gave me permission to send it to Outerzone.

Photo [006]: I have the original that Walt built himself that was shown in Model Builder Magazine.

Photo [007]: When Mooney first built this, he had a larger wing but then cut it down to make Bostonian rules. You can see how he modified the wing on his build with the dihedral in the middle of the wing.

Photo [main pic]: He also carved his own balsa wheels.

Photo [008]: He did not make the wooden cowl, he used the plastic cowl from an old Monogram Beaver Speedee built kit. 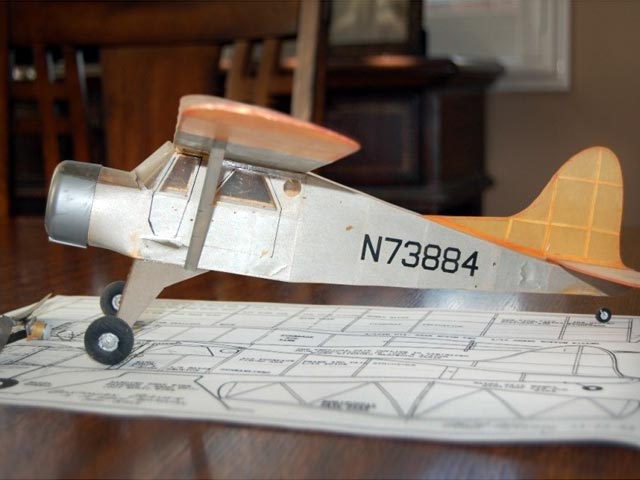 The plastic cowl is not from the Speedee built line but from the very short run of Lamilite models of which there were only three. Mr Mulligan and a shoulder wing Cosmic Wind racer were the other two. I have all three of these very rare kits. I am building the Walt Mooney clone of this model using the plastic cowl from a partially ruined kit.
MS - 24/05/2020
Greetings, Recently I built a (slightly modified) Bostonian Beaver from your plan, so if you want you can add some pictures I took of it to the page,
Wibert Sluys - 13/07/2020
Add a comment