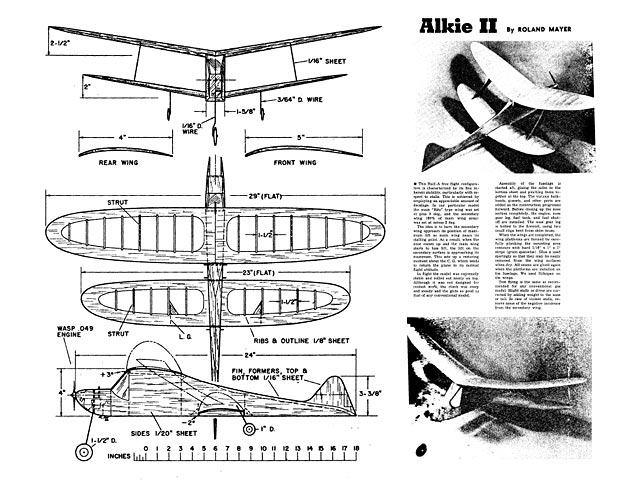 Quote: "Alkie II by Roland Mayer. This Half A free flight configuration is characterized by its fine inherent stability, particularly with respect to stalls. This is achieved by employing an appreciable amount of decalage. In our particular model the main 'Ritz' type wing was set at plus 3° and the secondary wing (60% of main wing area) was set at minus 2°.

The idea is to have the secondary wing approach its position of maximum lift as main wing nears its stalling point. As a result, when the nose comes up and the main wing starts to lose lift, the lift on the secondary surface is approaching its maximum. This sets up a restoring moment about the CG which tends to return the plane to its normal flight attitude.

In flight the model was extremely stable and rolled out nicely on top. Although it was not designed for contest work, the climb was steep and steady and the glide as good as that of any conventional model.

Assembly of the fuselage is started aft, gluing the sides to the bottom sheet and pinching them together at the top. The various bulkheads, gussets, and other parts are added as the construction progresses forward. Before closing up the nose section completely, the engine, nose gear leg, fuel tank, and fuel shutoff are installed. The nose gear leg is bolted to the firewall, using two small clips bent from shim brass.

When the wings are completed, the wing platforms are formed by carefully planking the mounting area contours with hard 1/16 x 1 x 1 in strips (grain spanwise). Glue is used sparingly so that they may be easily removed from the wing surfaces when dry. All seams are glued again when the platforms are installed on the fuselage. We used Silkspan on the wings.

Test flying is the same as recommended for any conventional gas model. Slight stalls or dives are corrected by adding weight to the nose or tail. In case of violent stalls, remove some of the negative incidence from the secondary wing." 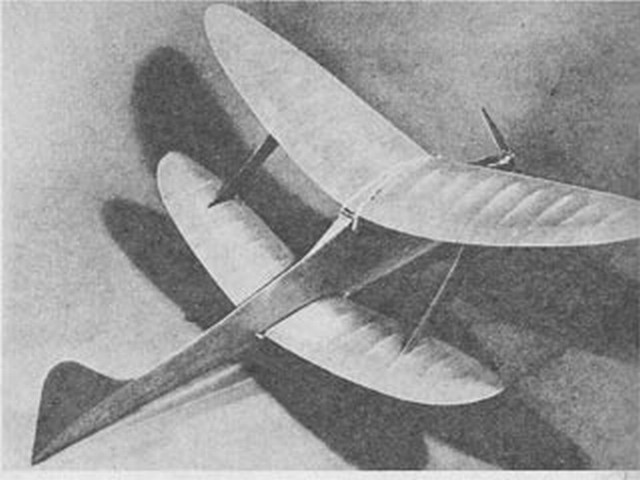