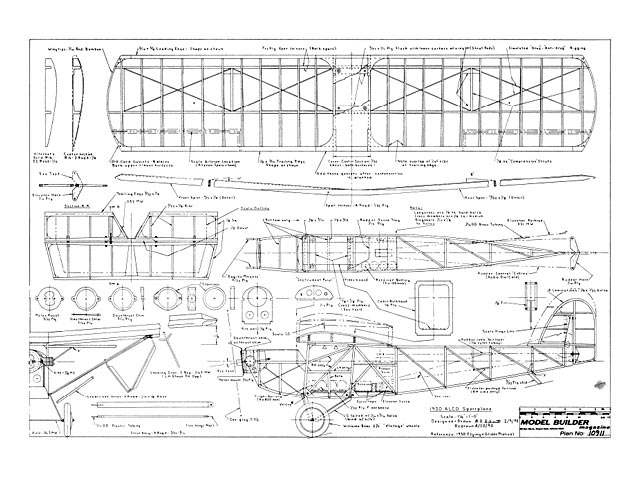 The year is 1930. Charles Lindbergh had flown the Atlantic just over two years before the world, and America in particular, had come down with a bad case of Aviation fever and many knew the only cure was to feel the wind beneath their wings. Yet the world was plunging into the deepest depression ever experienced, and money for flying was scarce indeed. Still, to a few, the desire to fly was so strong that they would find a way to achieve flight, even if they had to create it themselves.

Thus was the real birth of the 'home-built' phenomenon. World War I surplus aircraft Jennies and Standards had all but disappeared from the market, and besides, they were too expensive to maintain and operate. But it was possible to build, for very little money if one were clever and handy enough, a small single or two-seater which could be constructed and hangared in a garage, trailed behind the family car to the nearest 'flying' field (maybe a pasture?), and soon the harsh world could be left behind.

Such an airplane wasthe ALCO Sportplane designed by John M Allison, an aeronautical engineer from the University of Kansas, who, while still a student, taught himself to fly in a home-built of his own design in 1922. After graduation, he became associated with his brother in a firm manufacturing parts and kits for modified war surplus planes, and for home-builts. In his detailed 'how-to-build' article in the 1930 Glider and Flying Manual (Fawcett Publications), he states that this design would cost only $100 to build, exclusive of engine!

Engines have always been a problem for home-builders, even till today. Many home-builders opted for automotive engines, because of their availability and low cost. Prime examples; BH Pietenpol with his Model T Ford-powered Sky-Scout and Model A Ford-powered Air-Camper (to-day Volkswagen and Corvair engines are used). Others chose to go the 'motorcycle' route, such as Ed Heath (of Parasol fame) with his Heath/Henderson conversion. And, of course, the ever-present Harley 74 V-Twin, modified and used by many builders (and available for only $15, used!). Many other builders chose to build their own, starting from readily-available casting kits costing about $35.

There were actually several small (under 50 horsepower) aircraft engines available, such as the Aeronca opposed-twin of 35 hp, the three-cylinder Anzani radial (also rated at 35 hp) and, from England, the opposed-twin Bristol Cherub of 32 hp. Unfortunately, the cost of these engines was far beyond the pocketbook of most builders - the cost of the Cherub, for example, was $1270 in 1928 dollars, when one could buy a new Ford coupe for $600!

The engine which tempted many builders, however, was a small opposed-twin which was Lawrence-designed and built in quantity to power the WW I flightless training plane, the Penguin. These engines were still available in the late '20s and early '30s, new, in-the-box for $100! We pay more than that for a good model engine now. It was rated at 28 hp, but its output was probably more like 24 hp.

The Lawrence C-2 engine, which was chosen to power the ALCO Sportplane, was cheap, light, fairly dependable, easy starting, and easy to maintain. HOWEVER, being a two-cylinder opposed engine with just a single-throw crankshaft, it vibrated beyond belief, and if it didn't shake the airframe apart, it was sure to give the pilot one horrendous headache! Several remedies were available to the home builder; one being a new two-throw crank designed to fit inside the existing crankcase, but which required 'bent' connecting rods, as in some two-cylinder outboards. Another remedy, also featuring a new two-throw crank, in-cluded a new crankcase which staggered the cylinders, but allowed the use of the standard connecting rods.

One should not, however, have any vibration problems with our electric powered, 1-1/4 in = 1 ft replica of this interesting lightplane from the Golden Age of American aviation, powered as it is with a 50-watt motor, such as the HiLine ELF-50. The author has attempted to make this design as accurate a scale model as possible, as regards the airframe, consideringthe limitations of model materials and construction techniques. Aerodynamic dictated changes were two in number; four degrees of dihedral was added, as the author's model was built without ailerons, and flown three-channel. If a modeler builds the ALCO with ailerons, the dihedral can be eliminated. Further, the author thinks models still look better with maybe just a trace of dihedral- it keeps the wings from looking as though they are drooping!

The model may still be flown three-channel, utilizing ailerons (differentially coupled) and elevators, and no rubber, although the author has not tried this configuration. The prototype was also designed and built with a horizontal stabilizer and elevators approximately 30% larger in area than the scale surfaces. This was done to allow the builder more latitude in the placement of components, and location of final balance point. The scale outline is given on the plan, but if the builder chooses to so build, he should be aware that the final balance must be on the 'scale' location.

Construction overall is, in most cases, conventional. The wing is best built by first constructing the spars completely, then building the wing panels one at a time on the spars, and only then completing the center-section. If the builder is using 'built-up' ribs, the upper capstrips must be cut from 3/32-inch quarter-grained medium sheet, 3/32-inch wide. The lower caps may be cut from 3/32-inch square medium strip.

To begin construction, the leading and trailing edges are first pinned down to the plan, then the lower capstrips are fitted and glued in place. The spars are then positioned and glued, and the simulated 'compression spars' and 'drag and anti-drag' rigging, which is made from 1/32-inch round bamboo, doped silver, to represent the cables of the full-scale original (a good source for 1/32-inch bamboo is your local establish-ment that serves Mai-Tais). The wingtips are also bamboo, 1/16-inch round, to represent the 1/2-inch diameter steel tubing of the actual aircraft..." 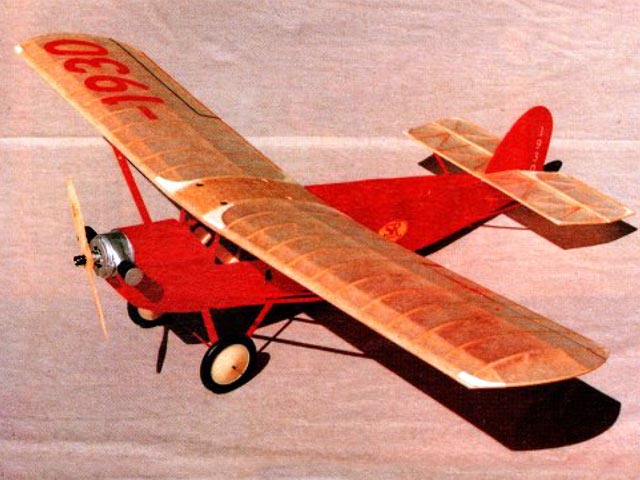