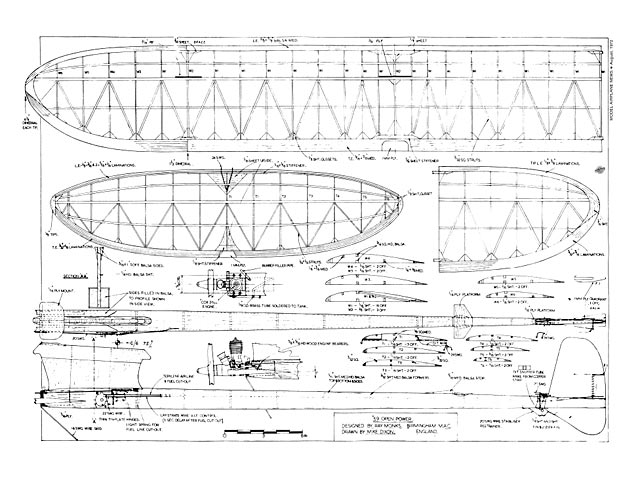 The big problem in writing this article was how to interest the reader. After all, this is a very ordinary-looking Pylon model; it doesn't use the latest, hottest, most expensive engine, or fancy air foils - not even a sweptback fin! I could give you a list of contest wins, but they were all in England and so won't mean anything to you.

Now how should I start to convince you that this model is worth building? First point of interest is that for the first time in many years you in the United States are flying with almost the same rules as we use, and while they are new rules to you, they are old ones to us in England. We have had years of experience of ten second motor runs and 180 second maximums.

During those years our models have developed along lines different from many American trends. For one thing our models tend to be smaller: 1/2A's have around 200-220 wing area; .15's, 300-400; .29's, 400-500 ...as you see, quite small by American standards. At the same time we have never taken to the high thrust line models. They have been built occasionally but have never been competitive with orthodox Pylon models.

It is also a fact that American designs have not shown up very well in this period, perhaps because nearly all the best flyers over here design their own models, though I prefer to believe that it was the difference in the motor run and the maximum flight time that explains why our models have developed along different lines.

Certainly if my models had to stay in sight for six minutes I should be tempted to make them larger, and if we flew our present models on 15 seconds run, we should lose a lot of airplanes. Upwards out of sight - we get some real big thermals over here.

Though you still want the basic qualities of a high climb and good glide, other qualities become more emphasized. The model must reach top speed quickly, the transmission from climb glide must be faultless, and since you want a better rate of climb, you must handle more power. This model will do all of these things. It's simple to build, easy to trim, and when you lose it, it doesn't cost a lot to replace.

Let's look at the model in more detail while I explain some of its features and the reasons behind their use.

Firstly, the use of a Cox Special .15: it is light, easy to operate, doesn't need a pressure system, but most important, it drives an 8 x 4 prop better than most other .15's. This big prop really pulls, so the model gets to its top speed quickly.

Variable incidence tail (VIT) and auto-rudder may seem a bit much on a 'simple' model, but that's how to handle a lot of power and get that good transmission to glide. It also lowers the drag on the climb.

This airplane is basically simple; there is nothing on it that doesn't earn its keep. The VIT system does need some explaining though, so please consult the drawing and photos where necessary. I use a modified Tatone timer to operate both the cut out and VIT plus rudder. As you see, I fit a disc to the tinier and use this to release two levers. The first lever released controls the cut-off and auto-rudder while the second controls the VIT.

In practice they work like this: The timer releases the first lever, and the auto-rudder moves to glide setting. Because of a strangler cut-out, the motor runs on for a half second or so and this will bank the model into the glide circle. After three or four seconds delay, the timer releases the second lever; by this time the model will have slowed down. Now the tail pops up to glide trim setting..."

Quote: "Hi, I have attached a plan my later father drew up in 1969 for Ray Monks of his Easy Rider open power model, it was drawn about the same time as his Automat Wakefield which you have listed, also drawn by my Dad.
It was sent to me by a friend from the model airplane news August 1972 edition which I have since found on Ebay. I have the original full size plans for both models and 1 copy, I built the Easy Rider last year for UK slow open power events without the auto rudder shown and slightly stretched the wing tips as I was using an OS19 instead of the Cox .15 as shown - pic attached." 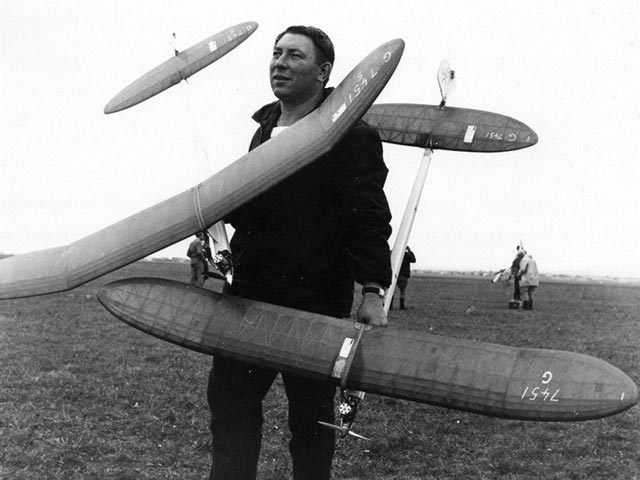