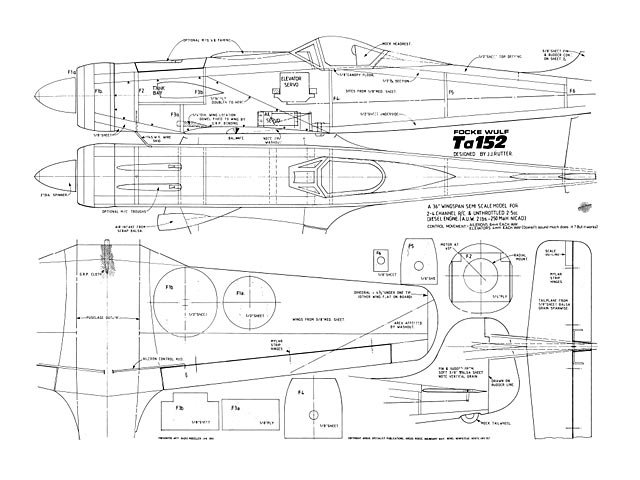 The FW 190 was always a favourite of mine and, in the longer nosed D version, a favourite of the modeller too. When I designed my Spitfire Mk22 (oz9984) I thought that it might be nice to match it with a late model of one of its adversaries so I chose the Ta 152, virtually the ultimate FW 190 despite the designation. Should you prefer the FW 190 D then you will be able to make the fairly small changes needed quite easily - most people couldn't tell the difference anyway!

I chose to keep the span at around 36 in, the size of a sheet of balsa, and this gave a model with much narrower wings than the Spit' but with a much wider fuselage despite being almost the same scale. Either the Germans were big lads or the Spit' must have been cosy. I decided to use an unthrottled 2.5cc diesel and not bother with rudder either so that I could then use cheap two channel gear. This doesn't really need a 500 mAh. battery so a smaller, lighter 250 mAh. job could be used. The overall saving in weight over a four channel system must be around 8oz, quite a lot for a small model!

Back end bits: The wings and tail are all-sheet for speed and ease of construction, as is the fuselage for that matter. The tailplane looks and is quite small despite being very much overscale. It is simply cut out to shape from a piece of 1/8in sheet and then given a thin aerofoil section without making the edges so thin that they are easily damaged.

Elevators are cut away and joined with 14 gauge piano wire to which I silver soldered a piece of drilled brass sheet for a control horn. (The whole assembly is then neatly enclosed in the back of the fuselage instead of hanging in the breeze.) The surfaces are centre hinged with strips of mylar. The fin is made from 3/8in sheet to give a more realistic section and also to give more room in the back of the fuselage for that hidden horn - again it's simply cut out from sheet and shaped to section.

Wings: The wings are made from two sheets of 3/8 balsa, not so hard that they weigh a ton but not so soft that they may be brittle or dent too easily. Once cut to outline and all the bits glued together the first job is to carve in washout to the underside of each tip. This done, the rest of the section is carved and sanded before cutting away the ailerons and root strips along the aileron line. Sand the root of the wings to give the dihedral angle and glue the wing halves together with either epoxy or cyano whilst blocking one tip up 4-1/2 in for the dihedral.

The leading edge of the ailerons can be sanded to a 'V' to allow centre hinging. The LE of the remaining little strips must be hollowed to take half the depth of the tube used as a torque rod pivot; the trailing edge of the wing centre section has the other half of the hollow. Make sure that the aileron horns have somewhere to come out and carefully glue the strips and tubing back onto the wings. Fit the aileron servo to its wood blocks and cut out suitable spaces in the wings to take them. Glue the blocks in place, solder the aileron horns, make up threaded wire pushrods and fit the ailerons in place. Check that everything moves well. The ailerons could be fitted permanently at this point but you may find it easier to leave this until they have been painted. Epoxy the 1/4 in dowel to the front of the wing and reinforce with thin glass cloth. Don't reinforce the rest of the join yet as the centre section has to be sanded to blend in with the fuselage underside later.

Fuselage: Now for the fuselage. The sides are medium grade sheet, NOT rock hard stuff as not only to they have to be pulled in to taper as normal, they also have to be pulled in at the top of the fuselage onto F4 and F5 to give the correct shape. I reinforced the nose area with 1/64 ply as shown. All the formers are cut out and F2 is drilled and fitted with blind nuts for the engine mount before F2-5 are glued to one half of the fuselage along with the tank bay floor.

When set, the other half is glued on top of the first carefully checking that it's parallel and square to the first side. Next the tail is pulled in and the remaining formers glued in place, lining the fuselage up over a straight line on the board helps and don't try to do the top bend of the fuselage until you've given the tail end time to set. When pulling in the top of the fuselage sides I find that cyano is ideal as glue because all you have to do is hold the sides together and run a drop of glue down the join, seconds later you have a very strong joint.

All the top sheeting can now be added, the only 'odd' bit to the process being the cockpit floor of 1/8 sheet and the scrap sides that have to be added to make up the cockpit sides. Glue the front underside sheeting in place then smooth off the front and glue the nose formers in place. They are best cut out well oversize by the way as they will then not leave conspicuous gaps to be filled. Carve and sand the front of the fuselage to shape. You may have to fit the wing temporarily to get the underside right, the cockpit area is shaped like the top half of a hectagon but this gradually changes to circular as you move forward. Machine gun troughs and fairings could also be represented..." 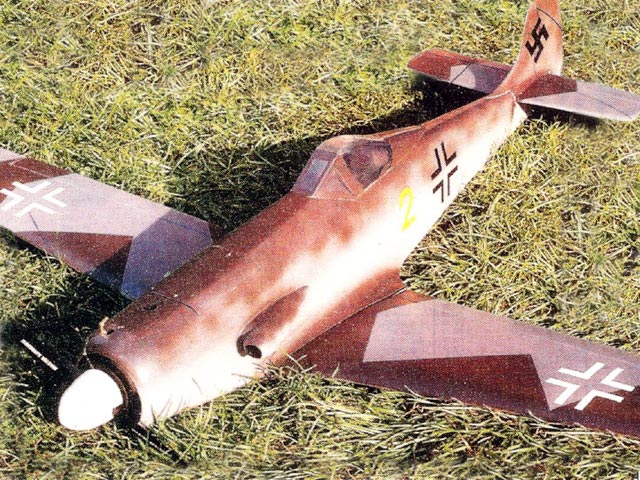