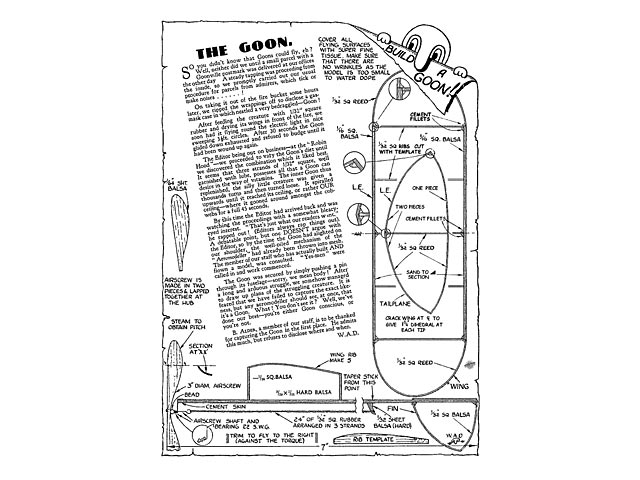 Design by B Alder, drafting by WAD.

Quote: "THE GOON. SO you didn't know that Goons could fly, eh? Well, neither did we until a small parcel with a Goonville postmark was delivered at our offices the other day. A steady tapping was proceeding from the inside, so we promptly carried out our usual procedure for parcels from admirers, which tick or make noises.

On taking it out of the fire bucket some hours later, we ripped the wrappings off to disclose a gas mask case in which nestled a very bedraggled Goon!

After feeding the creature with 1/32 square rubber and drying its wings in front of the fire, we soon had it flying round the electric light in nice sweeping 3 ft circles. After 30 seconds the Goon glided down exhausted and refused to budge until it had been wound up again.

The Editor being out on business - at the 'Robin Hood' - we proceeded to vary the Goon's diet until we discovered the combination which it liked best. It seems that three strands of 1/32 square, well garnished with lube, possesses all that a Goon can desire in the way of vitamins. The inner Goon thus replenished, the silly little creature was given a thousands turfs and then turned loose. It spiralled upwards until it reached its ceiling, or rather OUR ceiling - where it gooned around amongst the cobwebs for a full 45 seconds.

By this time the Editor had arrived back and was watching the proceedings with a somewhat bleary, eyed interest. That's just what our readers want, he rapped out! (Editors always rap things out). A debatable point, but one DOESN'T argue with the Editor, so by the time the Goon had alighted on our shoulder, the well-oiled mechanism of the 'Aeromodeller' had already been thrown into mesh. The member of our staff who has actually built AND flown a model, was consulted. 'Yes-men' were called in and work commenced.

The Goon was secured by simply pushing a pin through its fuselage - sorry, we mean body! After a long and arduous struggle, we somehow managed to draw up plans of the struggling creature. It is feared that we have failed to capture the exact likeness, but any aeromodeller should see, at once, that it's a Goon. What You don't see it? Well, we've done our best - you're either Goon conscious, or you re not.

B Alder, a member of our staff, is to be thanked for capturing the Goon in the first place. He admits this much, but refuses to disclose where and when."

Note this plan was extracted from scan of December 1942 Aeromodeller at RCLibrary, thanks to Stormin, Mary see https://rclibrary.co.uk/title_details.asp?ID=2365