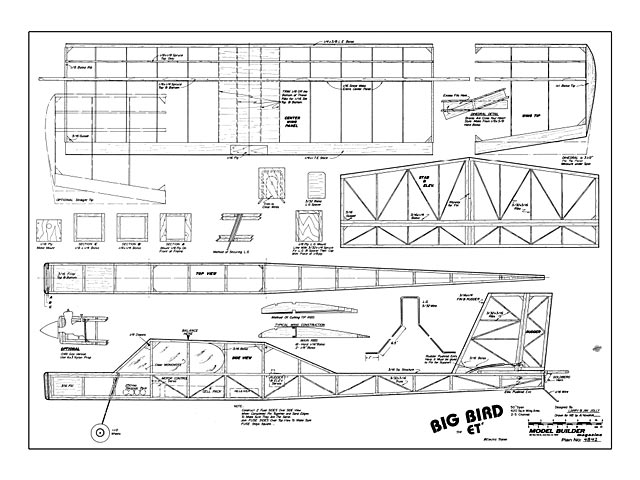 Are you tired of all those sleek looking, efficient flying, electric planes that you see so often? Are you a novice R/C pilot looking for an easy place to get started in electric powered flight? Are you looking for something quick to build and inexpensive too? Try a Big Bird the ET, it's so boxy, it's so cute, you'll love it!

Why Big Bird? Well, the current rage in electric flight 'SEAMS' to be enlarging free flight rubber powered models and powering them with an appropriate electric propulsion system. The reasoning behind this fad is that first and foremost, these free flight designs are extremely stable, and easy to build and fly. Secondly, gear driven electro-systems use large, scale like props and are perfectly suited to these lightweight structures.

After I saw a few of the designs that were being flown and/or published, I decided that I had to join the fun. There was, of course, an ulterior motive. As a child, I could never get those darn stick and tissue jobs completed before I would give up in despair and deliver the final crushing blow. I don't want to tell you how many of those things I wadded up like a soiled Kleenex, but there were quite a few. At last I would have my chance to get even with the designers of those awful kits that were never really intended to be finished and flown. I would have my revenge; I would successfully build a straight, stick fuselage. But why Big Bird?

I decided that my enlarged rubber model should be as easy to build as possible. Of course, this meant that under camber and multiple sized ribs were out. It followed that if I wasn't going to build a sophisticated wing, why should I ruin the character of the model by putting extra work in the empennage. No way - not me, a simple, uncomplicated, flat, horizontal and vertical stabilizer were in order. However, the model did have to have a stick fuselage. What a dilemma! What should I build?

While thumbing through an issue of Model Builder one day, I saw a picture of a Peck Polymer's Prairie Bird. Perfectomundo! That Prairie Bird had exactly the right shape, as a matter of fact, it had the right everything for my purpose. I dropped the magazine, and ran to the hall closet. Years ago I had purchased a kit of the Prairie Bird, but (luckily) I had not taken the time to go through the strenuous effort of opening the box. This mild case of indolence saved me from even more effort by relieving me from the arduous task of half building the model. It also saved me from the frustration of losing vital pieces while I thought about finishing it.

With the box in hand, I ripped off the end flap and spilled out the pieces. There they were, the Prairie Bird plans in all their boxy glory. I have to admit that Big Bird is not a total scale-up of the Prairie Bird, but if you were to stand back and close one eye and multiply the little one's dimensions by three, what you would get would remind you a lot of the Big Bird.

But why Big Bird? You know, even after explaining my reasons to this point, most of my friends kept asking me repeatedly, But why Big Birds? Well, here I'll give everybody the answer. I wanted to design a lightweight, scaled rubber job that would be easily recognizable, have general appeal, that could be powered by any sport six-cell system, and above all else, be easy to build and have excellent flight performance.

I believe that Big Bird meets the stated criteria to a tee. We have built and flown three different versions: an 05, can-type electric motor with direct drive and a 7-4 wood prop; a geared 2.5 to 1 electric system using a 10-5 wood prop; and an .049 gas version using a 6-3 nylon prop. All three have exhibited the same great flight performance. Personally, I am partial to the gear driven model. To me there is nothing prettier than watching Big Bird circle down to a landing with that prop free wheeling.

By the way, several novices have flown our prototypes, hence the addition of ET to the name. If you want to fly your Big Bird this weekend, we had better get going right now!

Before you start construction, procure the following:

BUILDING THE FUSELAGE This could be entitled: Back to Square One. There is nothing hard about building a stick fuselage. This one is even easier than most because the sticks are 3/16 square. To begin construction, cover the plans with wax paper and select four 3/16 square balsa sticks of matched type (that is, equal hardness and bending qualities). Use those for the fuselage longerons. Place two of the four pieces over the side view of the fuselage. Pin the longerons in place. Now cut the upright sticks and glue them in place. Cut and fit the 3/16 sheet balsa for the window outline, the nose reinforcement, and gussets; then glue them in place. Now, add the 3/32 x 3/16 truss members. When you have completed the first fuselage side, lift it from the plans and construct another one just like it..." 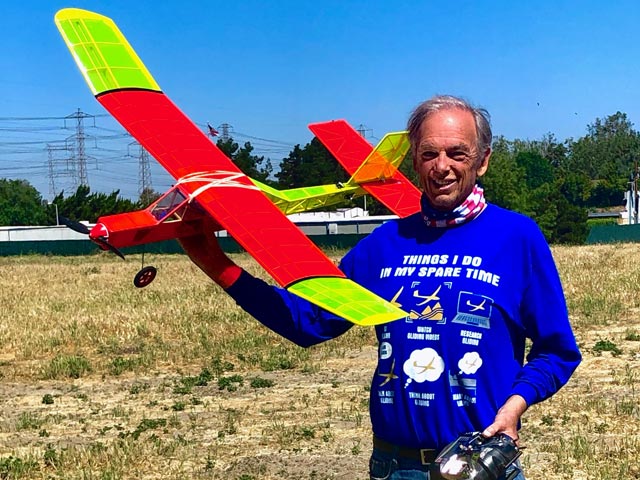 Steve Thanks for adding this plan to your collection! I remember when this model was conceived. If you keep the model light with say a Speed 400 type model and a light Lipo pack it should give wonderful soaring flights just like the little one. For perspective the little girl posing with the Big Bird [pic 003] is now a Lawyer and celebrated her 39 Birthday yesterday. Larry
Larry Jolly - 28/03/2020
Thanks for posting this drawing, and thank you Larry Jolly for working with Bob Peck on his kitting of the Prairie Bird 50, a result of the Big Bird design. I worked with Bob and Sandy and did the ink drawings for the Prairie Bird 50 kit. I'll never forget the Channel 10 News piece on Peck Polymers around 1982 during which Bob wound up the predecessor, a Prairie Bird rubber powered FF model, and launched it into a perfect thermal, never to be seen again! The news castor was heard saying "Simba - come back Simba!".
Keith Miller - 28/03/2020
The Big Bird appears to be an up-scaled version of the excellent Prairie Bird free flight model - therefore excellent in turn.
Martin La Grange - 30/03/2020
Good Morning Mary and Steve, I have been spending more time flying Vintage Models with some of my older Friends. I noticed that the “Allure of Flight” still burns strong, but the lack of recent Flight experience somehow makes them less confident, when they take their turn on the flight line. I wanted to encourage them to get more airtime, when I remembered Big Bird. A simple, easy model to build, and a really sweet flying honest Airplane to fly. I am not much of a Foam Model fan, but one thing I really like, is that if you let them sit long enough, they self disintegrate in to little styrene balls, that let you easily remove the equipment. I built this BB [main pic, 007], and used the power system, and servos out of a finished Horizon, Radian. It is a perfect combination for an everyday Fun Flyer. If you choose to build one, add another 1/2” Dihedral under each Wing Tip, and a little Exponential Rudder throw if your Radio allows. Enjoy and Make an Effort to Get more Stick Time!
Larry Jolly - 18/04/2022
Add a comment