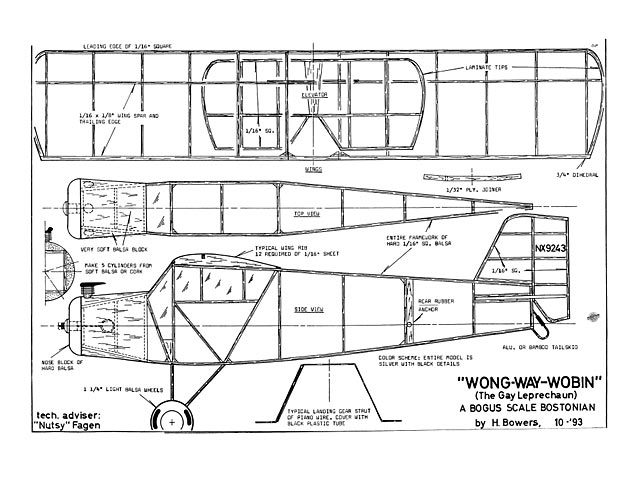 Quote: "Hurst Bowers' "Wong Way Wobin' is designed after the modified 9-year-old Curtiss Robin piloted by Douglas Corrigan that crossed the Atlantic in 1938, defying authorities who had repeatedly denied him permission. Corrigan filed a flight plan for a cross-country flight from New York to California, but after takeoff from Brooklyn he 'accidentally' headed east and kept going until he landed in Ireland 28 hours and 13 minutes later. This earned him a 600 word telegram from authorities listing his transgressions, a 14 day pilot's certificate suspension, and the nickname 'Wrong Way' Corrigan.

Hurst's model is 15-3/4 in span and rubber-powered to meet Bostonian rules and was published in November 1993 MaxFax, the DC Maxecuters club newsletter." 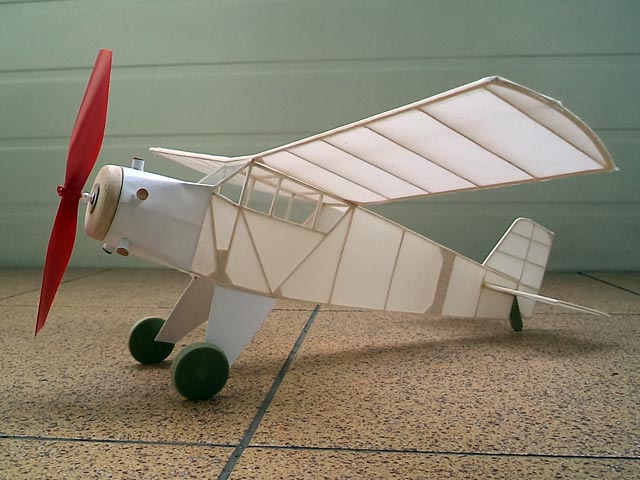 What a great story about dodging the contemporary authorities! Plus: A 600 word telegram must have cost them a fortune these days. :D
Martin - 28/03/2020
Wrong Way Corrigan's was one of the best leg-pulls in aviation lore. If you do a google image search on the terms above you'll find a number of lovely references from a New York Post front page to a delightful US National Day Calendar!
Modelwise, the plane colour was silver and the reg.no. NX9243. Corrigan replaced the original Curtiss OX-5 with a Wright J-6 5-cyl radial.
Mr Plumpe dug this gem from his Bowers treasure room, and it follows the Bostonian rules. More than that, the original actually flew over Boston MA on her (wrong) way to fame! I believe the plane still exists though I can't locate it ATM.
Miguel - 28/03/2020
The plane had been stored in Corrigan's garage in Santa Ana, California, up until about a year ago, then it was moved to the Planes of Fame Museum in Chino, Ca see https://planesoffame.org/events-calendar/The-Incredible-True-Story-of-Wrong-Way-Corrigan
Dave D - 28/03/2020
Miguel, the plane is in California, see https://www.key.aero/article/corrigans-robin-emerges-planes-fame
Bill Hibbets - 28/03/2020
Thank you all for your explanations! This is definitely an aircraft with a story with a capital "S". I built a Tern Aero Curtiss Robin (oz4391) some 40 years ago, but it never felt like an important aircraft in aviation history. Looks like this is to change right now.
There is quite a long article about the Curtiss Robin in general and Douglas Corrigan specifically at http://www.fiddlersgreen.net/models/aircraft/Curtiss-Robin.html Mind you, this is a commercial site, selling paper kits you have to print out, but the kits are lovely and charmingly nostalgic.
Martin - 29/03/2020
Thank you all from me too for the clarification regarding the location of this plane. For me this flight is not far behind Lindbergh's 11 years before. It did not go as far as Paris,p but whereas L did have some backing at least, C had his pigheadedness and the hostility of the US authorities (and justifiably so). He was lucky in landing in the best possible place for his caper (paddy ancestry helping), and in surviving for if he drowned he would have been just another crank and we-told-him-so :-)
Miguel - 29/03/2020
Hi Mary and Steve, I made this model Wong Way Wobin [main pic, 003-005].
Maciej - 23/08/2021
Add a comment