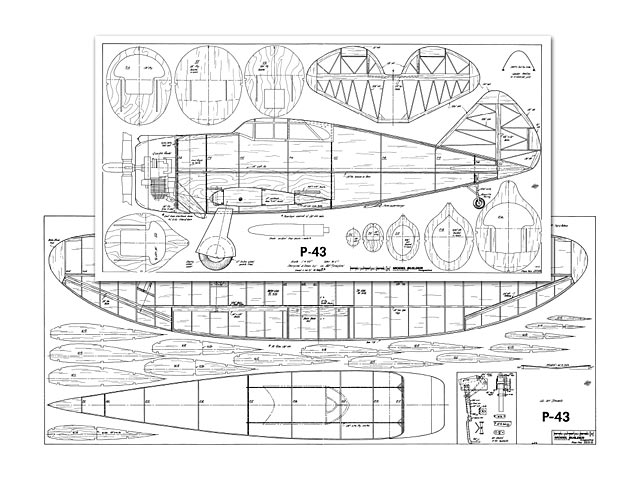 Quote: "The designer of our popular large-scale P-38 and P-40 models, comes up with still another. Predecessor to the famed P-47, the similarities are obvious. For Quadra or prop-drive power. Republic P-43 Lancer, by Col Art Johnson.

The P-43 was the first Army Air Force fighter to come off the line after the Seversky company became Republic Aviation. Although it was the first of a long line of Republic fighter aircraft, it was destined to become the least known of any of the World War Two fighters. Two hundred and seventy eight P-43 and P-43A models were built by Republic before the fighter was replaced on the production line by the P-47 'Jug'. If you were to run across the remains of one of these aircraft today, you would have one of those rarest of the rare finds. To my knowledge, not one P-43 survives. Not in a museum or even in a junk pile. Except, there is one reincarnation in miniature, and that is what this article is about.

So how come I decided to build a model of this most obscure WW-II fighter instead of another P-51 or Corsair? Well, I think you already know the answer to that one. Something different is always interesting, and how else can you get to talk to so many people while explaining that the bird you just brought to the field is not a P-35 or P-47? Contrary to popular belief, the P-43 did serve in combat in the Far East. The US shipped 125 of the aircraft to the Chinese Air Force, and others were flown in that theatre by US and RAAF pilots. Some day, an enterprising historian may dig out the facts on how it faired against the Japanese, but if any P-43 aces turn up, I suspect they will have names like Lee or Wong.

My personal involvement with the P-43 dates back to the summer of 1942, when I flew the P-43 and P-43A models at roster field, Texas, along with the P-36 and early P-40. This was where the Chinese pilots were checked out before returning to China to fly the P-43 against the Japanese. All the production P-43s came off the lines in 1941, and in early 1942 they were the newest planes on the base. I remember the P-43 as faster than the early P-40, but with a higher wing loading and requiring a bit more attention to approach speeds. At the time of Pearl Harbor, the P-43 was the only single engine fighter of the AAF that could climb to high altitude. It had the same GE turbo as the later P-47, but it was working with the Pratt & Whitney 1200 hp R-1830 engine - same engine as used on the Navy F3F Wildcat. It was high altitude capability that induced the AAF to convert many of the P-43 fighters to high altitude recoil aircraft. At altitude, they were as fast as the early Spitfires.

So nostalgia played a part in the decision to model the P-43. but I think the real challenge came from an urge to build a WW-II fighter that would fly well using one of the popular gasoline engines for power. I had been told that these engines were really useful only for the large light aircraft types. but I must admit that the few WW-II fighters I had seen built and flown with ignition engines were rather sorry performers. The reason for this poor performance seemed rather obvious, however, with builders falling victim to quarter-scale propaganda and trying to build all models to that size without having quarter-scale engines to match. A Piper Cub has a little more wingspan than a P-39. A nine-foot span model of the Piper Cub may fly well on a Quadra engine, but with the same engine, a nine-foot span P-39 would perform like a Cub, if it would fly at all. If you wonder why, just think of the P-39 performance with a 65 hp Continental in (I started to say nose) back end (middle?). I doubt if the P-39 would taxi, much less fly.

Getting the model sized right for the available power seemed the initial key to success, and I had already decided to go with the standard Quadra engine. There are more powerful engines around, but on a horsepower-per-pound and on a dollar-per-horsepower basis, the Quadra is second to none. The engine is larger and a little heavier than the largest glow engines, and these were the factors that made the P-43 look like an ideal choice for an ignition engine fighter. The short somewhat chubby P-43 looks a lot like its follow-on, the P-47. but it was in fact a rather small fighter with a hig engine up front. The nose moment is a lot shorter than the P-40 or the P-47, so the heavier engine is needed for balance. Better engine weight than lead weight.

The original P-43 had less wingspan and area than the P-40, so for the P-43 model, I thought t better go to a bit larger scale to handle the extra weight of the engine. wingspan is one inch more than on my 90 glow powered P-40 model, with the scale going to 1 to 5.3, or a little less than 1/5th scale. At this scale, the Quadra engine is almost lost within the big cowl of the P-43 model. With these decisions out of the way, all I had to do was draw up the plans and build the model.

In going with the gasoline engine, I was not interested in just another 'fun-fly Biggie.' I wanted a competition quality model, and this meant good documentation and accurate scale. Considering the limited production and obscure history of the P-43, there is a surprising amount of information available on the aircraft. MAN published William Nye's drawings of the P-43 many years ago. They are not bad on outline, but he shows a landing gear from a completely different aircraft. His fuselage outlines do not match any existing airplane. The book, US Fighters, has a fair three-view, but a little off on proportions, and there are others in various publications.

Photos are another story. I have dozens of photos of the P-43, some originals from 1942. Unfortunately each is a single photo of one aircraft from one angle. Republic Aviation itself proved the saviour on this one. When the first P-43 rolled off the line, Republic had the PR photographers out in force. They shined up the first P-43 demonstrator and took dozens of photos on the ground and in the air, both in color and black and white..." 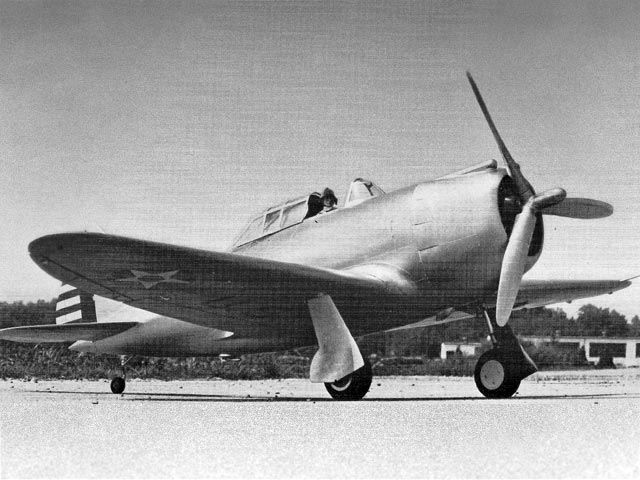 Not many indeed were manufactured, but still it was a milestone in American aircraft history, the P-43. There is a book I recommend reading, God is my Copilot, published in 1943. Author Robert Lee Scott Jr. (1908-2006) flew the P-43 Lancer over the Hump and elsewhere and he describes not only his life as a pilot but as well the flight characteristics of this notable bird of iron.Many thanks to Outerzone for filling a real gap publishing a pretty nice plan of such a remarkable airplane.
RobertS - 27/03/2020
Add a comment