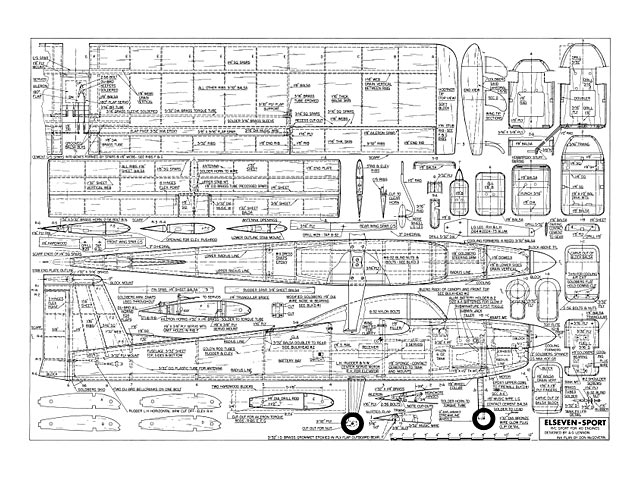 Quote: "A superior sport aircraft that is very stable and forgiving; one that will provide fun and action for any Sunday flier. Elseven, by AG Lennon.

The Elseven is a fun 'sport' miniature aircraft for the Sunday flier. Its design incorporates features that iI have chosen on the basis of experience with, and observation and study of, both model and full-scale aircraft. These are outlined below.

Streamlining: This model is 'clean' aero-dynamically. All protruding items, control horns, motor, and switches are internal. Those items - such as landing gear - that cannot be internal (without complexity of retracts) are faired. The muffler is exposed, but the jet effect of the exhaust offsets its drag. The model is efficient, and has a very flat, fast glide.

Wing: This is rectangular in plan, which in itself leads to a stall commencing at the wing roots. Section is NACA 2415, modified by a progressively greater leading edge droop outboard of the flaps. This, coupled with the differential ailerons and Hoerner wing tips, results in effective lateral control well beyond the stall. The model refuses to spin, despite repeated at-tempts by much better RC pilots than myself. You will not get a snap roll due to wing tip stall as you are landing - no instant kits.

Flaps: Because of the clean design and relatively high wing loading, the model is fast. With the flat glide, good landings are not easy; one runs out of runway fast. Slotted flaps, 60% of the wingspan, permit steep, slow nose-down approaches, or nose-high 'jet type' finals, which make landings easier to judge. Observers comment that the model looks as though it's being lowered by a parachute. Takeoffs with half flaps require no more than 15 feet of runway, and would you believe 6-foot diameter loops, flaps down!

T-Tail: I used this feature on a model flying boat many years ago. The stabilizer is out of both prop slipstream and wing down-wash. Trim changes - power-on or power-off, flaps up or down - are minimal. Rudder efficiency is improved since the stab acts as an end plate, and two drag-producing corners are eliminated. It means a heavier, thicker lin structure, but this is offset by the reduced horizontal tailplane area needed. The elevators on the full-scale Piper Tomahawk are very effective, as I know from having flown one.

Stability: The lateral area and CG relationship theories of Charles Hampson Grant are incorporated in this model. It is spirally stable, yet easily controlled.

Structure: Stressed skin construction is used. All surfaces are sheet balsa covered, which makes for a rugged but not overweight model. For ease of construction, the fuselage is slab-sided with rounded corners.

Accessibility: The removable hatch, roughly half the fuselage length, provides access to servos, linkages, fuel tank, etc, for easy adjustments. Similarly, the removable lower engine cowl gives access to motor and glowplug. It may be replaced with the motor running, but - like porcupines making love - very carefully.

On-board glowplug batteries: Two AA 1-1/2-volt cells provide current to the plug when the motor is running. An on/off switch is incorporated, along with a sub-miniature plug and jack (available from Radio Shack) for external battery connection. Properly wired, the plug will break the on-board battery circuit when inserted in the jack, should the switch be left on. This setup assures that the inverted motor will not load up and quit during prolonged idle. It is convenient to be able to start the motor with the on-board circuit if it quits just before takeoff.

If you want to get fancy, install a microswitch, motor servo operated, to cut the onboard circuit at high motor rpm. Wire one side of the jack to the glowplug, using the clip illustrated on the plans, and the other side to the motor mounting lugs.

Ailerons: Aileron throw is differential - the up-going aileron goes through a greater arc than the down-going. This eliminates adverse yaw and the model turns smoothly on ailerons alone - without rudder action. It also contributes to good control beyond the stall.

In short, this is a fun machine - an opinion shared by those fellow members of the Montreal RC Club who have flown it. Slotted flaps open up a fascinating new dimension in model aircraft performance - the craft has true STOL capabilities.

Assuming that this model will be built by a modeler with some previous experience, the following will deal only with the unusual aspects.

Fuselage: The fuselage bottom, being straight and horizontal except between bulkheads 1 and 2, may be used as the jig on which the rest of the fuselage is assembled. Note also that several bulkheads are subassemblies. Before closing up the fuselage, insure that all internal components - such as stab and rudder bellcranks, and antenna tubing - are in. Bulkheads 3 and 4 locate the wing relative to the sides. Their accurate location is essential.

The hatch is composed of front deck, canopy, and rear deck; it is best to final-assemble it on the fuselage for good fit.

Wing and stab: A jig composed of two 36 in long 1/4 in diameter drill rods supported at their ends by wooden blocks (see wing rib 'E') is used to insure correct alignment of the wing panels and horizontal stab. Aileron torque rod assemblies and linkage must be installed in the wing panels before skinning, which must be done while the wing panels are on the jig. The outboard flap ply supports should be epoxied accurately to their ribs before jigging.

Ailerons, flaps, elevators and rudder may be assembled on a flat surface. The stabilizer should be built on a jig, similar to the wing. Flap hinge location and flap nose contour are critical, and should seal the gap between wing and upper surface of flap when the latter is up. Flap pivot wires should be installed during flap assembly and epoxied in place. The fin is assembled on the fuselage.

Receiver and servos: Five servos are re-quired, of which one must be 180° rotation for flap actuation. Mounting of the servos will depend on their sizes and design. Since servo location is fixed, you are left with battery pack, on-board plug batteries, and receiver to shift around to obtain the CG location shown. All should be installed as high in the fuselage as possible to main-tain vertical CG location.

The antenna runs in plastic tubing as far as the stab mount, and then moves horizontally through the forward lb" diameter assembly holes in the stab ribs. Strong thread run through the tube before installation is essential. It should be threaded through the wing rib holes and out the stab tip when assembling stab to tin. Epoxy the antenna tip to the thread and carefully pull the antenna through as far as needed.

Motor cowling: Assemble as one piece, then cut at the horizontal parting line and install the ply fingers - four epoxied to the upper cowl and four to the lower.

Flap installation: Add brass tube bushing to the inboard flap pivot horns before the final bend. Leave undersurface balsa skin off at the narrow inboard trailing edge to the rear spar area (see ribs and 'G'). Cover all other wing and flap areas with MonoKote or other covering. Install the flap by inserting outboard pivot in grommet in the ply flap; support and epoxy inboard bushing in groove in balsa block. Skin with balsa and cover.

Covering and painting: Cover with Super MonoKote, or a material of your choice, Control surfaces and stab are covered before assembly to the model. Leave a bare patch on the stab underside for epoxy to mount. Stab end plates, canopy, wing tips, cowling, stab mount, prop, and land-ing gear legs are painted before installation.

Fuel tank: I prefer the filler tube arrange-ment shown on the plans, since, with hatch off, the fuel level is visible as filling progresses. However, many modelers prefer to disconnect the fuel tube from the carburetor for filling. It's your choice.

Switches and jacks: I mount all switches, jacks, filler tube, etc, on 1/16 ply, which is then epoxied on the inside fuselage wall leaving only sufficient external openings for levers, slide buttons, etc, to function, with little projection into the airstream. This makes for a neat, rugged installation.

Landing gear: The main legs are in two pieces - plus a small rectangular piece - to permit installation after the fuselage is assembled. Don't overlook the blind nuts in the 3/16 ply landing gear mounts, before you epoxy the latter to the fuselage bottom skin.

Motor starting: Trying to start an inverted motor can be a frustrating and exasperating experience; the only way is to invert the model on your field box supports, remove the cowl, and prime the motor by choking the carb with a finger while flipping the prop. Connect the external batteries to the glowplug, and starting becomes relatively easy. Disconnect external and switch on the onboard batteries. Note the small gain in rpm with current to the plug. The cowl can be replaced after choking or while the prop is turning - be careful!

Flying: For heaven's sake (and your own), make sure that the controls function properly and in the right directions, and that the CG is located as shown on the plans. Take courage in hand and let 'er go! Hope you enjoy flying this model as much as my friends and I have!" 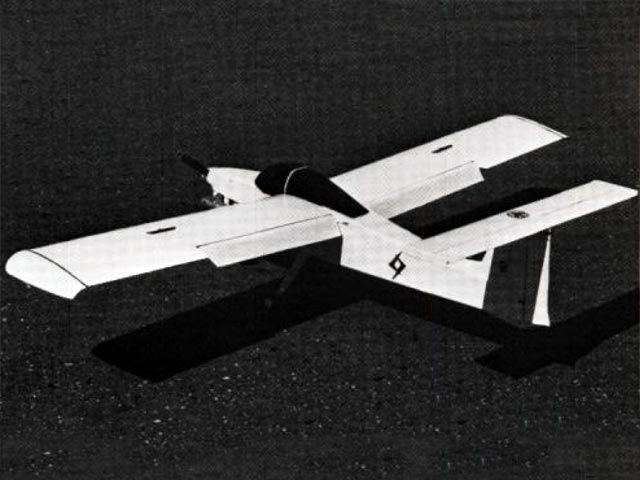