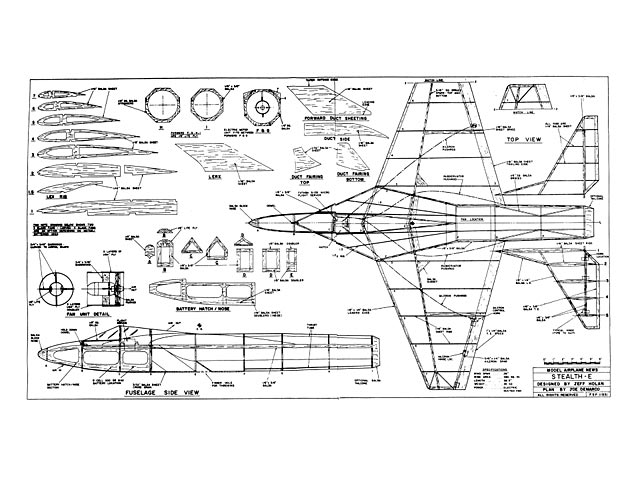 I designed the Stealth-E because I wanted a jet-style aircraft without the hassles that are associated with ducted fans. I was impressed with the performance and style of the planes at a local club's fan-fly, but I was discouraged by the gas, the noise, the glow plugs, the amount of fiddling and all of those starting probes and gadgets. It didn't look like fun, and some of the planes never did run right. I began to think about alternatives. How about an electric ducted fan? You just switch it on and throw it in the air! I already had my feet wet with electric planes, and I had a good idea of the sizes and weights needed for a flyable, fun plane.

Then the Gulf War started, and the new breed of high-tech weapons with surgical precision and deadly accuracy came to prime-time TV - Stealth technology! The F117A started the 'stealth look,' and the YF22 and the YF23 are nasty-looking fighters. I started sketching an electric ducted-fan Stealth. I read about the second Great Design Contest in Model Airplane News, and the race was on to design, build and fly this plane by the August deadline.

The Stealth-E prototype's first flight was like that of a powered paper airplane that didn't have enough power to sustain flight (it demonstrated, however, a graceful, full-power, flare landing). I discovered later that the single, three-blade fan developed more thrust with the access hatch removed, thereby producing a cheater inlet.

One week before the contest deadline, the prototype flew three successful 'sorties'. With my friend Tom at the sticks (I was a basket case) I ran, threw the plane and frantically grabbed my camera. With the increased thrust, the Stealth-E flew quite well and proved that an electric ducted fan was possible. Tom did a great job keeping the plane circling around us so that I could get some flight shots to prove that this thing could really fly; we had a hard time believing it ourselves! Its flare for landing was a thing of beauty. It would just hang in the air - nose high - and bleed off speed until it floated onto the grass. A week or so later, I flew it for a fourth and fifth time. My landings weren't so graceful, and the abuse showed on the plane. I crunched the prototype on flight 5-1/2 with a stall after a bad throw. The plane stopped on the ground, but the battery kept going. I picked up the remains and shelved them.

I decided to do some more research and make the necessary design changes on the plans but to wait to build another plane. I didn't want to use any cheater holes in my design, they actually decrease top speed, so I made some changes to improve the intake volume and the airflow. I hadn't thought about how to hold the model to throw it: there wasn't a place to grab on to for a good throw. I slanted the intake duct edges toward the rear and added a finger hole. I fixed the structural (design) problems with the rudder-vators and added the airfoil shape to them. To increase lift. I also changed the wing shape to an Eppler 197.

Good news: I won the design contest! Bad news: I have to build another plane and clean up my plans so that someone else can make some sense out of them. The plans are derived from the third version of the Stealth-E. It has the same profile and size as the prototype, but it flies much better. Experiments with different props ranged from single and double three-blades to the current four-blade. l used a plastic beer cup for a fan shroud in the prototype and a less than precise way to hold the motor inside it. The newer, rolled-plywood-tube fan unit is stronger, more efficient and makes motor timing a breeze.

I added more performance by switching to SR 1100 Max batteries with Sermos* connectors. The change increased the thrust 37 percent - from 8 to 11 ounces, and it decreased the weight by 1.5 ounces. I timed the motor for the highest rpm by turning the brush housing while the fan unit was running. Thrust is currently about 12 ounces, and the flight performance has improved greatly. If you build a Stealth-E, use light wood! Build it to fly - not to crash. 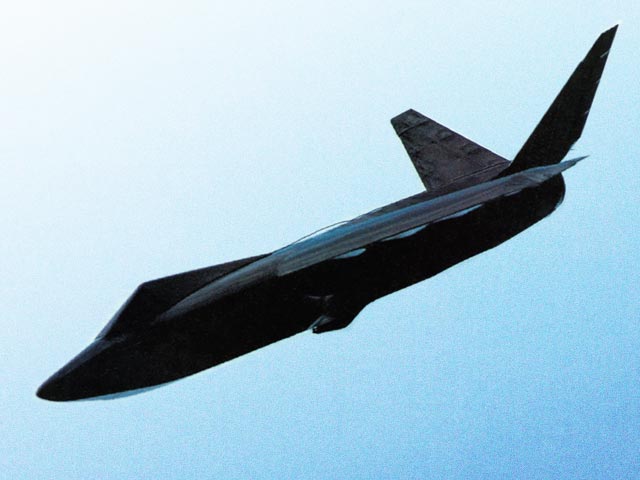