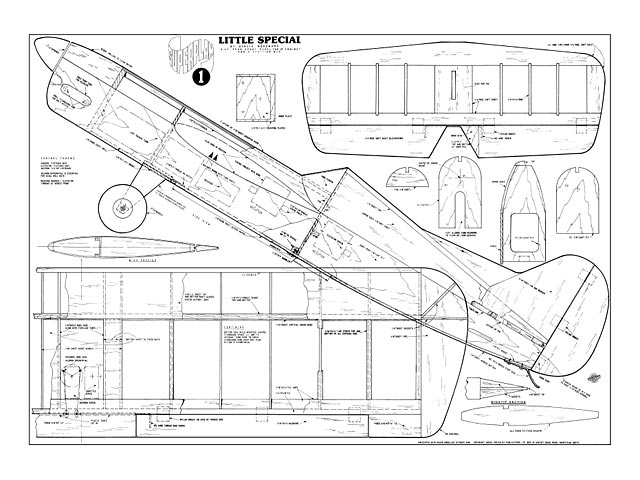 What's in a name? We'll clear that question up first! This compact hotrod started life as a series of doodles on hotel notepaper while on a business trip in Florida (someone has to do this sort of thing). Along with a requirement for aerobatic qualities was a real turn of speed so a little model wouldn't be grounded by a touch of wind. Now we all know that racers tend to be called the 'Something' Special but this one was coming out rather small - so somehow it evolved to 'Little Special'. So now you know - oh well, never mind!

A major element in the aerodynamic thingummies is the low aspect ratio wing with its 12% thick symmetrical section. This stamps out nasty tip stalling habits and packs a lot of wing area into a small model. Light airframe weight was achieved by leaving out a lot of complicated bits - for example, making her all in one piece saves the weight and fuss of wing fixing bits and a model that small is hardly a pain to transport in one piece. A touch of lateral thinking here also gave a spacious radio bay to ease fitting - no shoehorn tactics or subminiature gear needed here.

The structure presents no more than a few novelties and has been well tested in action. Perhaps as important, several alternatives have been tried and found wanting in earlier similar types.

The woodwork: Is in two big bits, so the wing is probably the best bit to start on. I suppose a foam version is possible but if misemployed loft insulation turns you on you probably know more about the stuff than I do. This structure is refined down to the minimum number of components to do the job, starting with the mainspar, length being the same as a stock length of 1/4 x 1/8 in spruce - 36 in long. With no joiners we've gained strength and lost weight already!

All the ribs are identical, cut around a ply template but if capstrips don't do anything for you, feel free to adjust the rib profile to suit and leave them out, I just like them. The critical phase of wing construction is ensuring that it's all framed up warp-free when the leading edge 'D' box is completed by webbing up the mainspars. Get a warp in now and it's in for life! Once built, this wing has the rigidity of a short builder's plank. A side benefit is that if you've only built (?) foam wings before this would be a good one to start on learning how to build decent structures.

When you fit the ailerons and their torque rods, check that the rods are offset to the correct side. As everything is fitted from underneath there's ample opportunity to get the torque rods on the wrong side. How could I know why to advise you on this point?

Take care on achieving the closest possible ailerons/wings fit possible as a tiny amount of gap or slop will have a significant and bad effect on aileron response. The plan shows the needed aileron differential; this is essential for an axial aileron roll - without the differential she'll roll very barrely. There's no magic behind this, but it was proved over a lot of flight time.

For now just sheet up the centre-section between the mainspars and trailing edge - later some of this will be cut away to accept the radio fit. All that remains is to fit the tips and sand the whole wing up good and smooth, have a tea/coffee whatever break and contemplate the other big bit

The fuselage: About the only novelties here are the LitePly sides and the low component count. Using LitePly, now widely available, means no messing about with doublers, but I have built a similar fuselage using 3/32 hard balsa and 1/32 ply doublers in the past .

The basic assembly is to join the sides with F1,2 and 3. Don't pull in at the sternpost yet - it'll go a funny shape (yet another gem I can report on factually!). Now form the rolled top deck from Fl to F3A from two layers of bendy 1/16in sheet. Cut to size, dampen on their outer face and tape into position until dry.

Why not just use lashings of thick sheet and triangular stock? Well, sheet is cheape-. lighter, stronger and there's no carving Equador Gold into the carpet! Once the sheet is dry use a template of the wing profile to cut the top deck out for the wing. Now you can fit the wing permantly - knowing that the top deck will fit later..."

Quote: "Hi Mary and Steve, Here's a plan for 'Little Special', another clever design from Dereck Woodward's design portfolio. It was published as a free plan in Radio Modeller October 1988 together with the article written in Dereck's enjoyable writing style. A possible bonus for building this model is that you can re-use the surviving wing. The prototype wing makes a reappearance in his Bubbles (oz11826). Originally a multicolour plan, my rather fragile copy fell apart as I started to build from it last year, so as a result this monochrome scan was assembled from the bits. I couldn't see this plan in OZ so hope it's of interest. Once again, a big 'thank you' for your great work at OZ! Best wishes, Paul" 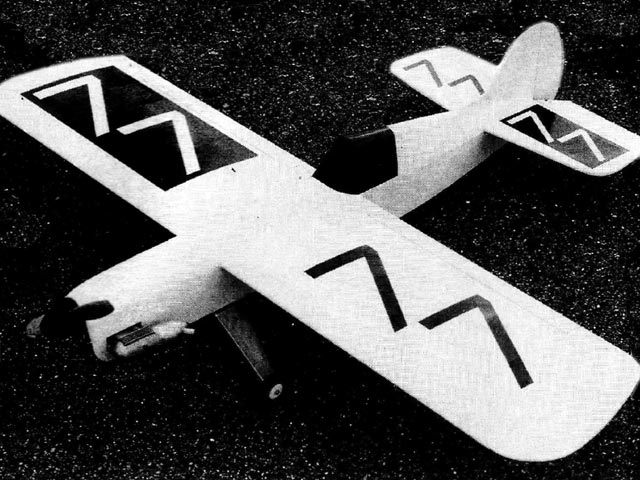