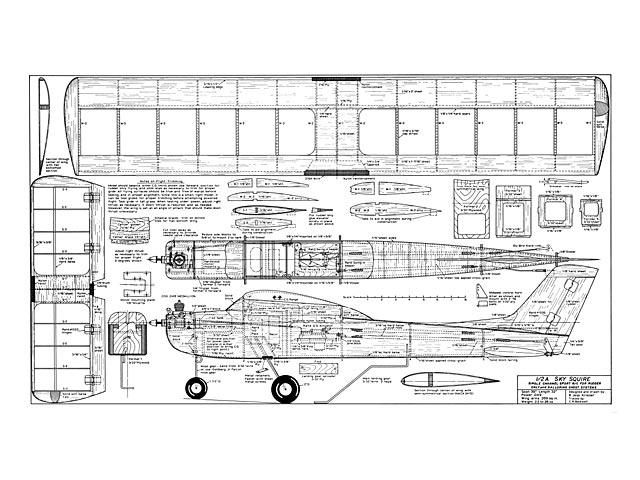 I have always been interested in the smaller-sized R/C ships, as they are much easier to transport in a car, build faster, and have lower inertia loads which enable them to take more pounding around from the goofs of pilot error without fatal damage to the structure. However, there was little in reliable lightweight, compact control equipment to give rudder, elevator, and motor control for a small ship until Herb Abrams came along with a simple, reliable Galloping Ghost actuator which did away with the complicated 'bird cage' at the tail-end that always seemed to be a source of constant trouble. Later, the Dual-Pak system with twin actuators operated from a decoder offered even smoother, more reliable control of rudder, elevator, and throttle.

When these systems came along several years ago, it seemed natural to me to scale down the Sky Squire to fit these systems. I started out with the 1/2-A ship, for 049 to 09 size engines. By this time I had become somewhat of a convert to digital proportional, and I wanted another small edition of the Sky Squire with just enough room in it to pack in three channels of a digital system, so the Junior size version was born. This one offered more than enough room for the Galloping Ghost or Dual-Pak systems.

At the time these ships were developed, I had no idea that full-house digital systems would soon be reduced in size to 10- to 15-ounce systems. But since they have, both of these ships are right in the mainstream of the trend, and are ideal for the new compact digital systems, as well as GG and Dual-Pak systems. The new Controlaire system with 225 mah power pack and S-4 servos is ideal for either of these, and with a little extra work on the part of the builder, you can even go to ailerons on either of these ships..."

Note this plan shows parts to build either a flat-bottomed or semi-symmetrical wing.

Quote: "Performance is similar with either wing, except that the flat-bottomed version will glide a bit slower, and is a bit gentler to handle on landing approaches. However, it won't do outside loops or inverted flight very well because of the abrupt change in lift coefficients resulting when a flat-bottomed section is turned into an inverted position.

When flying with Galloping Ghost systems, the semi-symmetrical wing version is smoother to fly, as it does a better job of damping out the slight up and down movements that result from the 'galloping' control surfaces. The flat bottom section produces larger changes in lift coefficients when the angle of attack is varied slightly, hence, tends to be more sensitive to the galloping effect of the con-trol surfaces. This is not a characteristic of this particular design, but simply an aero-dynamic fact of life, and is true with any Galloping Ghost ship utilizing a flat-bottomed section. Whichever wing you choose, you'll find this to be a real rewarding fun airplane to build and fly. "