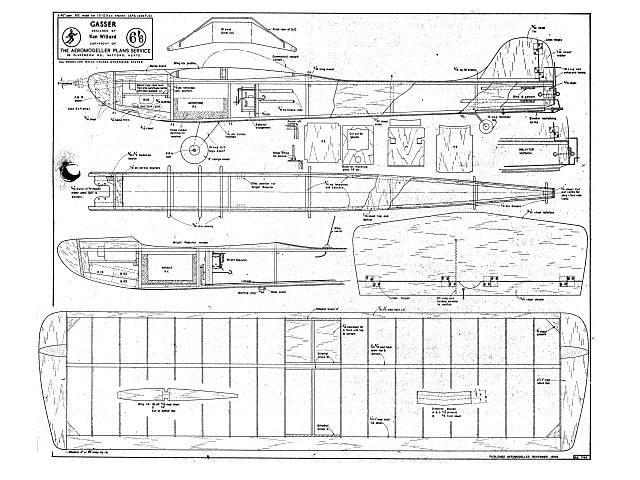 LET ME BEGIN THIS article by telling you quite frankly - if you're a beginner in radio control, put these plans and this article away until you've got a little experience in flying. Or, if you prefer, go ahead and build yourself a Gasser, but get an experienced flyer to check you out before you solo.

You see, the Gasser is deceptively simple to build - as radio jobs go. Also, when you watch it fly, it looks very easy - and it really is, once you get on to it. But - and this is the important point - this airplane isn't called the 'Gasser' for nothing. When it gets going, and you give it a down elevator to get up to high speed, you've got a handful of lightning, and it can strike faster than you can see the ground coming up! I know - I've clobbered mine twice just by getting fascinated watching it zip along upside down, then forgetting to pull out in time. Fortunately, it's rugged and repairable.

But enough of this warning, you're probably going to go ahead and build it anyway. So let's talk briefly about the idea behind the design.

The Gasser was designed for pylon racing. It is a legal AMA class .09 pylon racer; the wing area figures out right on the button at 386 sq in. The prototype won first place in the LARKS pylon racing contest early last year. It had a flat bottom wing which gave vicious zoom characteristic when rounding the pylon, so the final design incorporated the semisymmetric airfoil to reduce this tendency. Also, the tail moment was increased, and the aspect ratio lowered from five to four. Finally, the downthrust was increased from 5 degrees to 8 degrees to help hold the nose down under power at high speed. This in turn caused a reduction in the right thrust, since the prop. wash now is directed so that it just hits the top of the fin. Right thrust is from 0 degrees to 1 degree, depending on the trim of the model. Bill Glick, John Shearer and I each built one. John did a beautiful job on his, with a detailed cockpit and all, as you can see in the photos. Mine was functional in nature, as was Bill's. But they all do a terrific job of flying.

The AMA only has one class for pylon racing, so it soon became apparent that the multi-channel boys would dominate this event. However, at the LARKS Western Open, we had two classes, so I pointed for that meet. In practice I was making between 27 and 30 miles an hour for the five-lap course, and figured to place pretty high. Occasionally I would tire of practising racing and would grab a little altitude and try a few manoeuvres. This was when I discovered that the racing design has really great potential for precision flying. The manoeuvres are large, but exceptionally smooth for single channel operation. I have my 'poor man's multi-control' modified four position Babcock excapernent mounted in my Gasser, and with it I found I could do excellent loops, Immelman's, Cuban eights, and a power dive that is frightening.

I went to Bakersfield with the intention of winning the single channel pylon event; but the time allotted for pylon racing was very short, so just for kicks, I also entered precision. I didn't have a motor control installed, for fear it might work when I didn't want it to, during a race, so I had to do the pattern and manoeuvres all at high speed. The entry list was long, but I got in three flights. Then came pylon. I took off, was flying along fine until the third lap, when suddenly my receiver began dropping out and I lost control. The result was that I never finished the pylon race - but I came in second in the intermediate precision event! Actually, I had used up my batteries in flying precision, and they were too weak to hold a prolonged signal which was required for racing.

So, although the Gasser was originally designed for racing, (and a multi-channel version could probably do all right in coming events) it turns out to be a top flight performer in precision - and that's the event it's competing in now.

As I said in the beginning, this airplane is for you fellows who have a little experience under your belt. With that in mind, I figure you also have some pretty good ideas of your own regarding installations, so haven't gone into much detail, except to show that your gear must all be packed well forward in order to provide the necessary balance. Let's consider the various steps in building the Gasser.

The wing is very straightforward in construction. Use medium hard balsa for the leading edge, spars, and trailing edge, and medium balsa for the other parts. Build the wing in one piece, right on the plans, using 36 in wood, then cut it in two and splice back together at the centre section, fitting the dihedral braces as shown..." 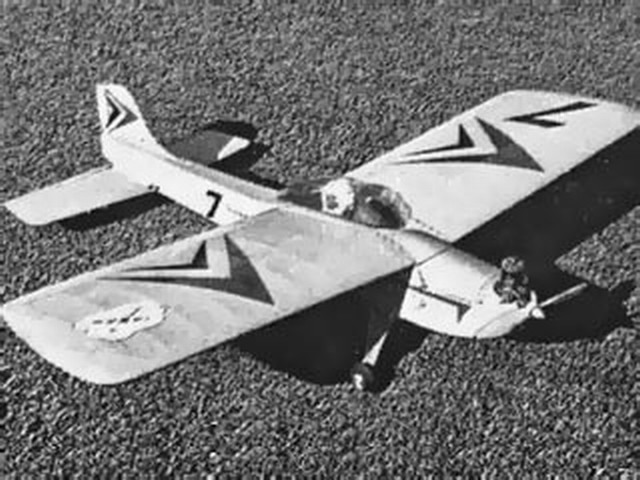