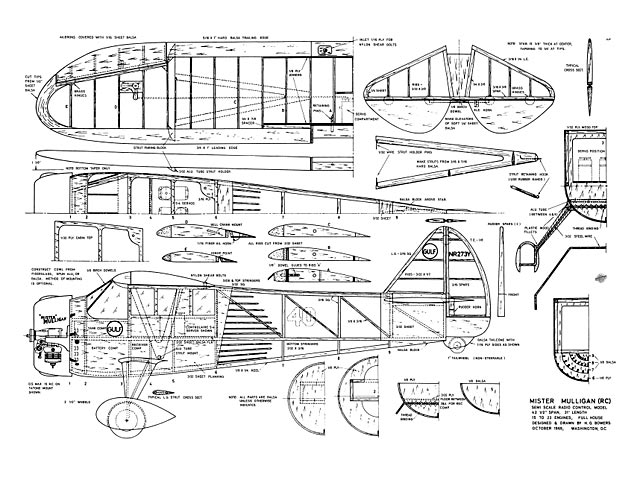 Quote: "The Howard DGA-6 'Mister Mulligan' was designed by Benny Howard specifically to win the Bendix Trophy race. Despite its chunky shape, it won both the long-distance Bendix and closed-course Thompson races in 1935. Hurst Bowers designed this 42-1/2 in span model as a semi-scale 4-channel RC flier for .15 to .23 engines and published it in the April 1970, issue of Model Airplane News magazine. There are gobs of fuselage stringers, but they're simple to install and overall the design is not a difficult build."

Breathes there a man with soul so dead, who never to himself hath said: I'm going to build a Mister Mulligan! Not an exact quotation by any means, but indicative of the feeling held for this beautiful, old classic presented here in a size ideal for small engines.

There isn't a model builder in this country who has reached the action age of forty that won't assume a nostalgic smile when the name of Benny Howard and his 'damn good airplanes' are mentioned. Pete, Ike, and Mike were fine, but the one that really turns me on is the big, white cabin monoplane dubbed Mister Mulligan. There is something about this big brute that is most appealing. Not only is it the type airplane that most of us would like to own and fly, but it was a highly successful racer as well. In 1935 it won both the Bendix and Thompson races with average speeds of 238.70 and 220.19 mph respectively, beating out such old pros as Col Roscoe Turner and Steve Wittman. There is no doubt that the Mulligan success story would have gone on and on but for an unfortunate incident during the 1936 Bendix dash when the propeller shed a blade over New Mexico. Benny and his wife, Maxine, barely escaped with their lives (thanks to some reluctant Indians) after being pinned in the wreckage for four hours.

Most of us have built several Mulligans in our time, starting most likely with the beautiful Cleveland kits and later going to control line, for the old barrel just wasn't good in the free flight arena. Now that radio control equipment has reached such a state of perfection and reliability, there was no reason not to have a go at it again, so out came the folder of clippings, three views, photographs, etc, and after several days on the drawing board making the necessary compromises, a plan took form which was a reasonable start.

I must emphasize the fact that there were some compromises which I felt would pay dividends on the flying field and not detract too much from the appearance of old 'number 40.' The major change was in the wing. I increased the span slightly to obtain more area and used a flat bottom airfoil with one degree of incidence. I think this was a wise move.

I don't like large models, for I have a small workshop and hate to be more crowded during construction than is absolutely necessary, so I decided to keep it small. This is possible and practicable now that such fine, small equipment as the Controlaire with its magnificent little S-4 servo is available. I must admit that I tend to be practical at times, so the exact size of my model was determined by an aluminum cowling I've had for years which had the exact outline of Mister Mulligan's. I quickly saw all the work this would save so I ended up with a model of 42-1/2 inch wingspan. The fuselage is large and able to accommodate both hands while installing the radio gear, and the size permits several power plant options from which to choose.

Although I have shown the OS MAX .15 R/C on the plans, the MAX .19 will provide good power and the Super Tigre .23 R/C will give you a real bomb if you keep the weight down (my model weighs slightly over three pounds). Needless to say, I was conned into using the latter engine, although my chicken stick kept telling me I should not. So be it; we now have a fast airplane, and a very stable and flyable one.

I hope it will inspire some of the pylon boys to organize a miniature Thompson event in the not too distant future. Ernie Greene (of NVRC fame) is building an Art Chester 'Jeep,' and there has been talk about some other Golden Age of Air Racing projects. So far it has only been talk, but now that they have seen the Mulligan fly, we expect it to become action.

Enough of this chat-chat; let's get on with the task at hand and start building this bird. May as well begin with the fuselage, for when it is done, the major task is complete and the wing and tail are quickly built.

The two basic sides are built of 3/16 square hard balsa and joined in the conventional manner with formers and stringers added as subsequent steps. Notice that formers 3 and 6 extend to the top of the fuselage. This adds strength where it is needed and insures a safe and sound compartment for your radio gear. Lace the wire landing gear legs to formers 4 and 5 and plank the front of the fuselage with 3/32 balsa strips, 1/4 to 3/8 wide. A good job here will help add strength as well as provide a beautiful base for scalelike finishing.

Build the tail plug using 1/16 plywood sides to support the tail wheel axle. The wheel isn't steerable but it doesn't matter too much for this is a flying bird, not a 'Dodo'. Add the landing gear fairings..."

This good Mr Plumpe's scanner must be smoking already! Col Bowers soul must be grinning from that Big Cumulonimbus up there where deceased airmodellers meet :-)
Miguel - 19/03/2020
Add a comment