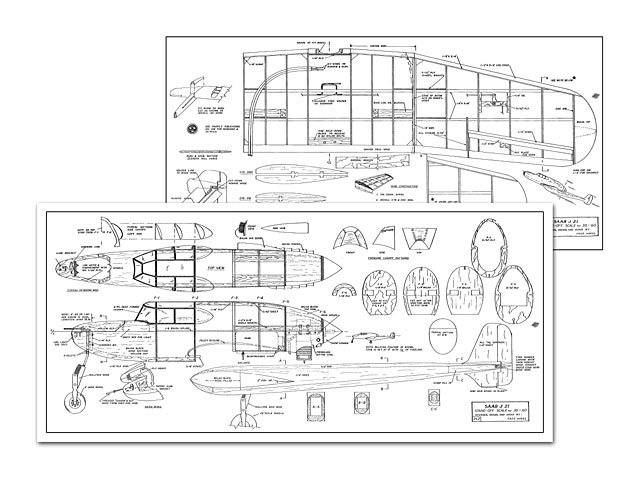 Scan from dfritzke, cleanup by Circlip.

Maybe those tall, leggy, blonde Swedes in Playboy got to me. Maybe it was because I really couldn't pronounce that name with my New England twang. Maybe it was the raised eyebrows and the cynical sneers when I suggested the project to my flying buddies. Whatever the reasons. I just had to build that Saab. The three-views of this unusual fighter kept flashing through my mind.

Finally , after weeks of muttering words like 'pusher' and 'twin booms
' and 'I wonder if ...' my kids dragged me to the workshop and barred the door with: Now, build the thing!

As I started to layout the aircraft. it became obvious why it had so much appeal. Man, it had class. Take a pusher-fighter with rakish lines, a generous wing and tail area, a trike gear and twin booms. Add clean scale details and a simple color scheme, and you have a stand-off ship that is sure to give you a chance at any contest. Or, if you're not ready for the contest scene just yet, make a low flying pass at the local field and then brace yourself for those long, leggy, sweet things high-stepping out of those racy sports cars.

The remarkable thing about this model was that, ready to fly, the weight was only four and one-half pounds! Test flights convinced me that a slightly smaller version would fly equally well on less power. Consequently, the plans offer an option of wing sizes and power choices. The larger version flew cleanly with an Enya 45 and a Tornado 10 x 6 pusher prop. The smaller version, which was thrown together in a hurry with no attempt at beauty, did just as well on a 35 and a Grish three-blade pusher.

OK, let's build. Carefully select your balsa for building and try to keep the tail light. To achieve the correct balance, it was necessary to fly with the landing light batteries and three ounces of weight in the nose. Don't worry about adding weight, the large wing area can take it. Get a copy of Profile Publications No.138 for reference. With that tacked up on the wall, the plans laid out in front of you, and a peanut butter and jelly sandwich at your elbow, you're all set to start with the fuselage.

Cut out a matching pair of 1/8 medium-hard balsa splines as shown on the top view, and cut out all formers. Also cut the top and bottom keels from 1/16 plywood. Mark the former positions on the keels, splines, and the maple motor mounts. Mix up a batch of epoxy, and glue formers F-3 through F-6 to the motor mounts. This will give you a crutch on which to support the splines and top keel.

After the epoxy sets up, white glue the splines and the top keel. Then add formers F-1, F-2, and the bottom keel. When everything is dry, you can plank or sheet the framework. If you are adept at planking, do it! I've found that it is just as easy to sheet compound curves using the following technique.

Select a 'bendable' sheet of 3/32 balsa, spray with hot water, and glue to formers F-1, 2, and 3, and along the side splines. Note that the glue joint on F-1 stops just under the side canopy. Hold in place with masking tape and pins. Now cut a 'V' in the top of the sheet from F-3 to F-5, and start shaping the sheet down to the curve of the formers with your fingers. By cutting and fitting, you'll be able to form the sheeting into a neat curve.

When satisfied with the fit, coat the formers with glue and tape the sheet to them. Don't worry about any gaps where the sheeting meets. This can be filled in as described later..." 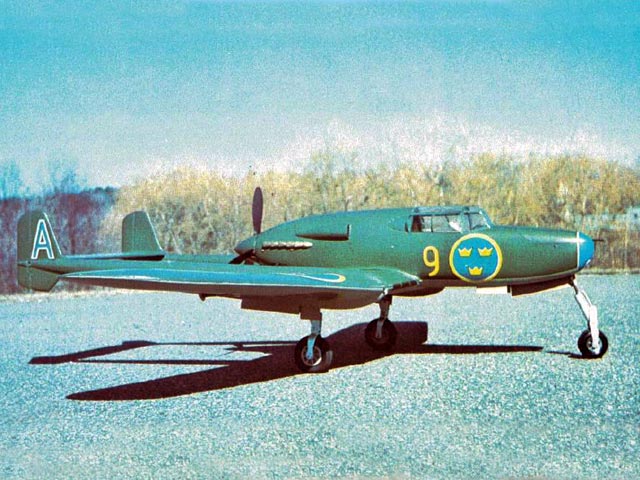